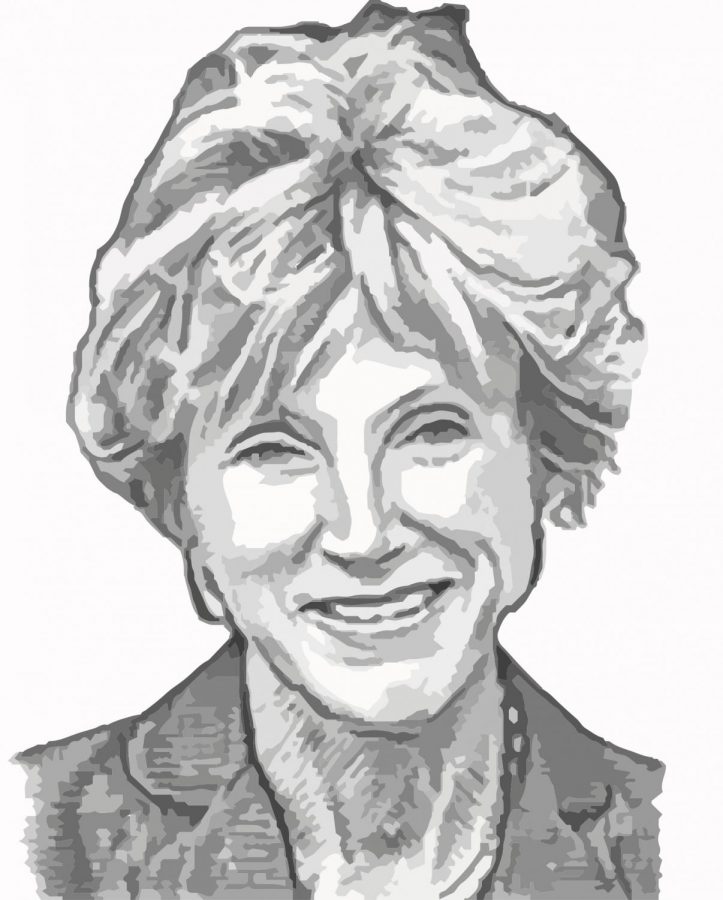 Barbara Snyder loved the late-night breakfast. At 9:30 p.m., the Case Western Reserve University president would shed the confines of her office to enjoy pancakes and sausages, joining students in using greasy diner food to calm the nerves of finals season.

“She was walking around, talking to Fribley dining staff and stopping by tables with students,” said Spring 2019 graduate Fanny Huang. “It was so sincere that she was at our dining hall on a random Thursday night at 10 p.m..”

Snyder is now leaving the university she has shaped for the past 13 years to become president of the Association of American Universities (AAU), an organization that represents 63 American and two Canadian universities. The 65 universities include every Ivy League school, public flagships like University of California, Los Angeles and other prestigious private schools like Johns Hopkins University.

Despite the new title, to students Snyder will always affectionately be known as Babs.

When Snyder became the president of CWRU in 2007, she inherited an institution on the brink of financial disaster.  A $19 million deficit hung over the university like a specter. Snyder instituted a three-year plan to fix the school’s finances, but the university managed to eliminate that debt in her first year.

The plan reduced spending in the first year and used revenue increases in subsequent years to pay off the deficit. There were no layoffs related to the plan, according to a university spokesperson, but vacant positions remained temporarily open to further reduce costs.

Gerald Saidel, a faculty member for 52 years, called Snyder the most effective CWRU president in the past 50 years, citing her fundraising skills and recognition that research is the key to CWRU gaining more visibility.

Snyder’s predecessor Edward Hundart angered alumni through several terrible branding moves. Hundart shortened CWRU to just Case, a decision that enraged many Western Reserve University alumni who thought that it disrespected how CWRU represented two institutions coming together to create something new. Hundart also introduced a much maligned logo, the infamous fat man with a surfboard. Snyder undid these two decisions, bringing back the original name and introducing the sunburst logo, based on a design present in the crests of both Western Reserve University and Case Institute of Technology.

Her success at attracting money to CWRU continued over her tenure, with the Forward Thinking capital campaign, which started with a $1 billion goal in 2011, but ended up raising $1.82 billion by 2019.

Fourth-year Tobili Hatcher remembers several close encounters with Babs. Once while getting her nails done in Legacy Village, Snyder walked in and sat next to her to get her own nail job.

“She tries to come, at least, to the multicultural stuff to show her support. She’ll give opening and closing remarks to say thank you,” said Hatcher. “It’s cool to see her on a personal level, because usually you only see her in a press release. It’s sad to see her go.”

Under Snyder, 11 buildings, including the Tinkham Veale University Center and Larry Sears and Sally Zlotnick Sears think[box], were built. Academic standards increased with the average ACT score increasing from 28.6 to 32. The school became more diverse during Snyder’s tenure as well, with the percent of students from underrepresented minority backgrounds increasing from eight percent to around 20 percent.

“People think it’s not diverse now, but it wasn’t diverse at all back in the day,” said Hatcher. “We are now at a nice stepping stone where we can aim higher but back then it was like ‘wow I’m never going to go here.’”

President Snyder also had an important role in the Greek community, according to Panhellenic Council President Himica Kalra. Snyder attended general body meetings once a year, and hosted the scholarship reception at her house.

However, for many students, Snyder was a distant presence, as she did not give many interviews or other public statements.

“As a figure like that, you have to bridge professional responsibility and responsibility toward the students,” said Moroh. “I feel like the latter part was less present during my time here. It makes me sad. I feel like I would have enjoyed my experience a bit better if there was less distance between the students and the administration.”

CWRU Board of Trustees member Fred DiSanto will lead the search for a new university president. DiSanto said that the board will create a Presidential Search Advisory Committee, made up of staff, students, faculty and two emeriti trustees to help decide the criteria for a new president.  The board asked students to nominate possible committee members by Tuesday, Feb. 11.

The University is retaining the consulting firm Spencer Stuart to help find a new president.

Snyder’s departure came on the same day that Vice President for Research and Technology Management Suzanne Rivera announced that she is leaving CWRU to become president of Macalester College in Saint Paul, Minn. In recent years, CWRU has had to find a new provost, a new college of Arts and Sciences dean and, when Pamela B. Davis steps down this summer, a new medical school dean.

“In recent years, the average tenure for most academic leadership positions has declined; for example, while figures for specific disciplines vary, average decanal service, in general, hovers around four to five years,” said a university spokesperson. “Dean Davis will have served about 13 years in her role (including one as interim) when she steps down this summer, while Dean Taylor served 12. Finally, President Snyder will have completed more than 13 years at Case Western Reserve when she departs, while the most recent average for university presidents nationwide is 6.5 years.”

Snyder will act as president until the fall semester. Her status as a member of the Greater Cleveland Partnership and University Circle Inc. is unknown at this time.

Unlike most students, Undergraduate Student Government (USG) President Marin Exler has spoken to Snyder many times. She has monthly meetings with Snyder and Vice President for Student Affairs Lou Stark to give them updates on the legislation that the USG is working on.

“She was a big supporter of the free menstrual health product resolution and made sure it was the university staff’s job to restock all the different bathrooms on campus,” said Exler. “With her support, that was really easy to get through.”

Exler said Snyder has blocked USG resolutions from being turned into university policy in the past, often requesting more specifics about how the policy would be implemented, but has always been respectful.

“A few years ago when Chippy Kennedy was president, he passed a resolution with the GA asking the university to completely divest from fossil fuels,” said Exler. “She wrote back with a nice letter that we have framed in our office. She said, ‘Chippy, I get it, but I don’t have the ability alone to make a change that sweeping.’”

Snyder made history not only as a fundraiser, but also as the first woman president at CWRU.

“I think it’s huge to see someone in that position, especially when you may not see anyone in that role,” said Exler. “To come in, after 200 years of only male presidents, is really daunting. Especially with the situation we were in, when the university wasn’t doing so hot, she came in for a really specific purpose, to uplift the school and make it as strong as it possibly could be. Which is not an easy task. The university was in a tough situation and she was able to completely turn it around.”

This article was edited to clarify that the debt was eliminated in the first year of Snyder’s tenure, so the second and third years of the financial recovery plan did not take effect.