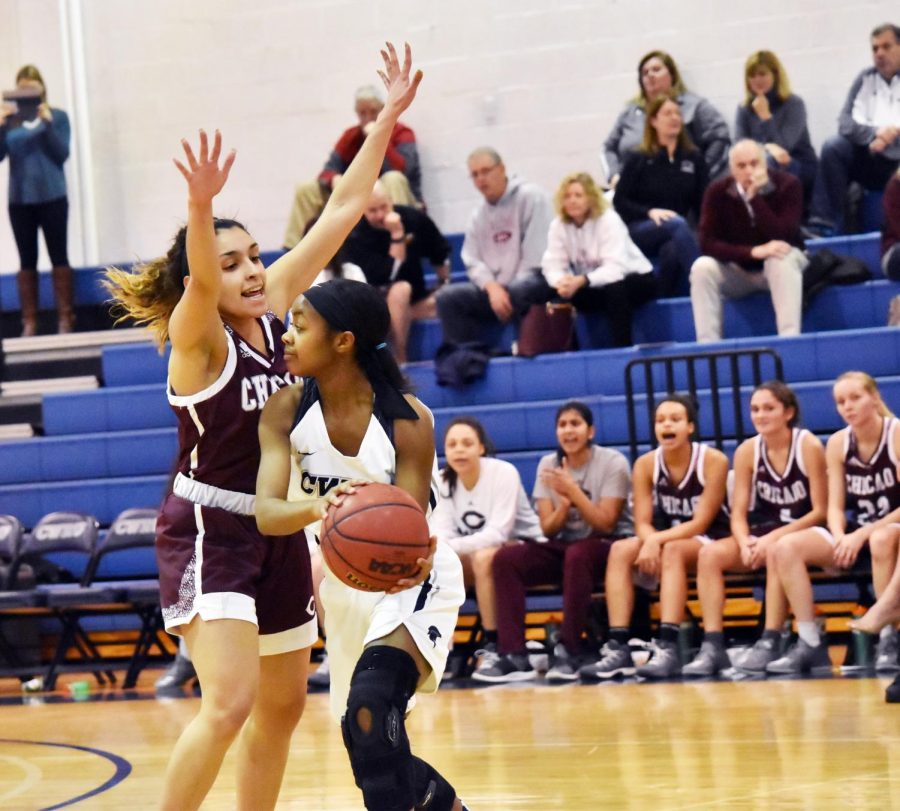 First-year guard Jasmine Floyd looks past a defender during the Spartans game against Chicago.

Sometimes you can’t have the best of both worlds. It’s like eating ice cream on a scorching hot day, or scoring your 30,000th career point in a loss to the Kawhi Leonard-less San Antonio Spurs.

In the Washington game, both teams struggled to get their offenses going initially. At the five-minute mark, Hellmann managed to hit a stepback jumper off of a pick and roll to start a 7-0 run for the Spartans. The Bears went on an 11-3 run in the second quarter. First-year guard Emily Todd answered back with three 3-pointers, but Washington strongly maintained the lead, ending the half up 40-29.

The Spartans deployed a 1-3-1 zone defense, emphasizing trapping the sides of the court and using first-year guard Jasmine Floyd as the back line.

At first the Spartans were able to force bad shots and turnovers. However, Washington broke down the zone by quickly getting the ball into the paint. In total, the Bears scored 48 points in the paint while CWRU managed just 14. The Spartans eventually switched back to a 2-3 zone. The Bears shot an insane 53% from the field, so perhaps no defensive alignment could have stopped them.

In the third, the Bears extended their lead to 18. Hellmann scored career point number 1,000 with a heavily contested jumper over the outstretched arms of two defenders. Hellmann and third-year guard Alexis Amburgey trimmed the deficit down to nine, but after a timeout Washington pulled away in the fourth quarter.

In the team’s second game of the weekend, Chicago managed to outscore the Spartans in the first three quarters, eventually building up a 26-point lead in the third quarter. The Spartans could not crack Chicago’s tough defense, making only a total of 18 field goals for the whole game

“Chicago shot the ball well from the floor and they were strong defensively, ” said Todd.

“We all just have to continue to put time into our game in and out of practice in order to keep building confidence and consistency for both our offensive and defensive skills,” Todd said.

The Spartans, still looking for their first UAA victory, will travel to Boston to play Brandeis University on Friday, Jan. 26, then head to New York City two days later to play New York University in another conference game.