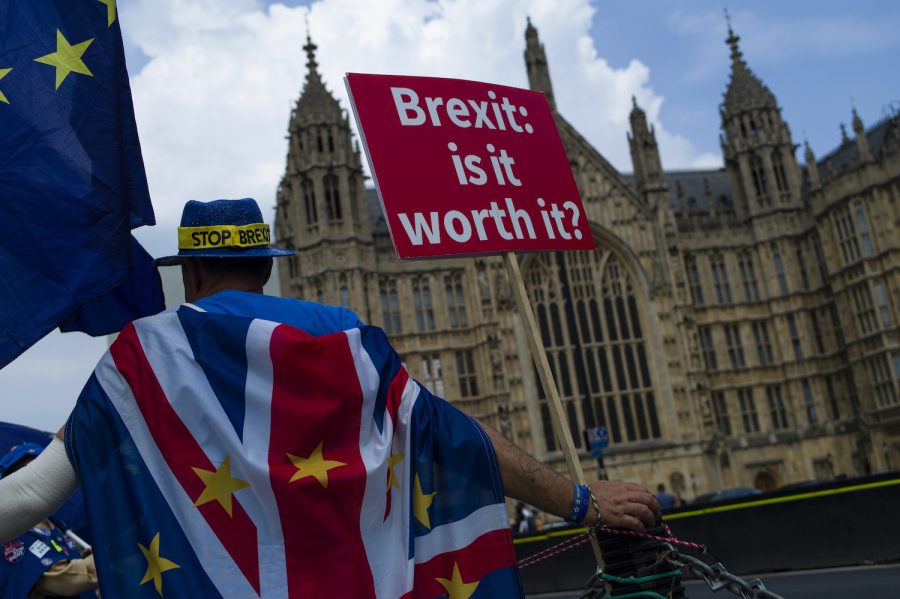 LONDON, ENGLAND: A man protests against Brexit outside the Houses of Parliament on July 5, 2018 in London, England. A prolonged heatwave continues to grip much of the country, with no rain falling in some part for over six weeks. While many enjoy the sunshine, the lack of water is having a dramatic affect. Farmers are finding it difficult to feed their cattle, water levels in reservoirs are falling rapidly and wildlife is struggling. As rivers dry up reports of 'mass fish die offs' have been reported. (Photo by Dan Kitwood/Getty Images)

June 23, 2016. That was the date of the referendum that resulted in the people of the United Kingdom deciding to leave the European Union with a vote of 52% in favor and 48% opposed. Yet, two prime ministers and nearly four years later, the UK finally left on Friday, Jan. 31.

Originally, Britain was due to leave on March 29, 2019. However, members of Parliament (MPs) continually blocked the deal negotiated by former Prime Minister Theresa May. After the third rejection, May resigned, and was replaced by Boris Johnson. After a sweeping Conservative victory in last December’s general election, Johnson secured a comfortable Conservative majority in Parliament, and was able to get the Withdrawal Agreement through Parliament.

Luke Reader is a professor in the Department of History, specializing in Modern British history. He is currently teaching a Brexit-centered SAGES course this semester. I interviewed him about Brexit and why he believes it merits its own SAGES class.

News Editor Surita Basu: What exactly does it mean for Britain to leave on Jan. 31? What will change?

Professor Reader: “We don’t know for sure what it means for Britain to leave the European Union. But Britain has been a member of the EU since 1973. Huge areas of British life—law, the economy, social policy, immigration rules, trade in goods and services, travel, to name just a few—have become interwoven with EU law. For the rest of 2020, Britain’s relationship with the EU will remain similar to what it is now, but beyond that, we just don’t know. This is part of the problem. There’s just a huge amount of uncertainty that comes with Brexit”

Basu: Why should we care about Brexit?

Reader: “Across the globe, there has been a massive reaction against mainstream politics. Nativist, authoritarian parties and candidates have won elections or increased their share of the vote massively in recent years. There has been a huge upsurge of interest in socialism. Brexit is the British version of this trend. But there are other reasons to care about Brexit. Britain is the economic conduit to the EU for the USA and many other nations. These countries will need to build new links or find ways to continue working through the UK. There are also security implications. Britain does a huge amount of work balancing US-European interests through institutions like NATO and the Five Eyes intelligence network. Brexit threatens this by making Britain’s role in Europe-wide anti-terrorism and law enforcement cooperation much more uncertain. It’s not all bad news though. I’m originally from Britain, but I’ve lived in the USA for 18 years. The cost of traveling to the UK has never been as cheap as it is now.”

Basu: Why was it important to have a SAGES class dedicated to Brexit?

Reader: “I wanted to have a Brexit class for a couple of reasons. Brexit is happening right now. That means that we’re not just watching history unfold in front of our eyes. We’re reading about events as they occur and writing papers that contribute to the ways in which historians will understand Brexit in the future. Secondly, we’re looking at the ways in which Brexit has affected almost every aspect of life in the UK and transformed the ways in which people see both themselves and their fellow citizens. There are lessons from this that we can apply to this country as well. The implications of all of this fit neatly with the goal of SAGES, and are a good example of what these seminars can achieve.”