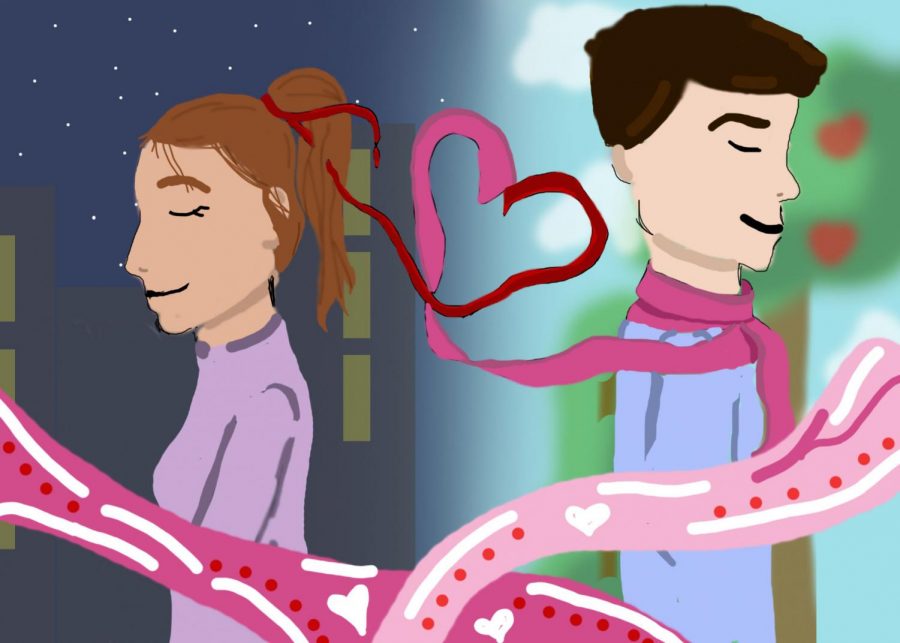 Dakota Guardado-RenaudBeing in a long-distance relationship (LDR) is tough, and no one knows that better than college students separated by thousands of miles and dozens of states. The prospect of going about your day, not being able to hold the hand of your significant other while walking to class or cuddling up to watch a movie on a Friday night can prove emotionally taxing to many couples, with some succumbing to the distance and time-commitment. While college is a new and exciting time for students, it can also be a complicated frontier for those in LDRs, as the uncertainty of seeing each other and conflicting busy schedules can drive people apart.

However, LDRs can serve to strengthen and renew the bond, trust and love that existing couples have, resulting in long-lasting relationships. LDRs take time, commitment and trust, with open communication and honesty serving as the foundation to build a healthy and secure relationship that can weather the miles of separation. After interviewing students around Case Western Reserve University’s campus, you can really see how complicated and emotionally onerous an LDR is, but also how rewarding and powerful it can be during such a pivotal and important time in a student’s life.

“So I snuck into Michigan’s dining hall…”

Not all LDRs can survive the physical separation and time commitment, and while they often ultimately come to an end, that is not to say that they are without fond memories and stories. Chris Heerman, a second-year civil engineering major, began dating his now ex-girlfriend in high school, and continued this relationship into college, despite numerous detractors suggesting that LDRs never work. Although several of their friends from high school broke up over the summer before their first year at college, Heerman and his then-girlfriend were committed to making it work, and felt confident about their relationship, given the relatively short distance between Cleveland and Ann Arbor, MI.

Heerman fondly remembers writing letters to his then-girlfriend, and FaceTiming for hours, saying that, given modern technology, “staying in contact is pretty easy.” He specifically recalls how his spring break didn’t line up with that of his ex-girlfriend’s, so he decided to embark on a five-hour road trip to Ann Arbor to surprise her. He laughs while describing how he contacted her friends to sneak into one of the University of Michigan’s dining halls and surprise his girlfriend.

Over time, however, the busy schedules became too overwhelming. His ex was pre-med, and Heerman was an engineering major, so the odious amounts of homework proved challenging to balance, while still dedicating the time required for an LDR. Heerman says that it “became a chore having to FaceTime when you just wanted to go to bed. I felt like I had to,” and reiterates the need to have open communication to keep a relationship alive. Ultimately, after two weeks of being bogged down by homework and a lack of communication, Heerman and his girlfriend broke up before his second semester spring break. Despite how this relationship ended, when asked if he would be in an LDR again, Heerman said that “maybe, it just depends on the distance,” showing that he is open to putting in the commitment and dedication again.

“So I met my girlfriend at my high school grad party…”

Meeting your girlfriend at your own high school graduation party, with only three months to spend together before the daunting separation that comes with going to different colleges, may not prevent seemingly inevitable failure. For Chris Markham, a third-year student majoring in English, this proved to be right. Twice.

Markham and his girlfriend, Carissa, dated the summer before their first year of college, with Markham leaving to come to Cleveland and Carissa going to Washington and Lee University in Virginia. Given the distance between their respective colleges, and the overwhelming nature of starting university, they both decided to break up, only to reconnect and rekindle their relationship the summer before their second year of college.

However, the looming prospect of the distance got the best of the couple again, and they broke up again, only to reconnect and rekindle their relationship again the summer before junior year. This time, it stuck, though.

Markham’s love and appreciation for his girlfriend is undeniable, with him frequently recalling delightful anecdotes throughout this interview and reiterating his indisputable belief in his relationship. He says that, despite the distance, given their complicated past, he has realized that “life is better when she’s a part of it. Even though she’s a nine-hour drive away, having her in my life in this capacity is infinitely better than not having her in my life at all.” He says that he misses “just being able to get in the car and drive 15 minutes to her house, especially during those days when both of us are busy and have hardly any time to touch base,” and that given that both he and Carissa’s love languages are physical affection, the distance can become challenging. However, Markham says that nothing beats the anticipation of Carissa visiting, and recalls stories of taking her to Barrio, Mitchell’s Ice Cream and downtown Cleveland with his friends, and how excited he was to share his life in Cleveland with her the first time she visited.

The rich connection that Markham has developed with Carissa is infectiously romantic and adorable. Markham notes that when someone is determining whether or not to pursue an LDR, they should ask themselves if “this is someone you want in your life so badly that you’re willing to deal with this limited capacity. If the answer is yes, then you fight for that. But be honest with yourself. If the answer is no, it is better to say so than to stay in a strained relationship.” Ultimately, Markham says that it is important to remember that “at the end of the day, you know that this is your person, and it’s all great.”