Break out your brackets, March Madness is here 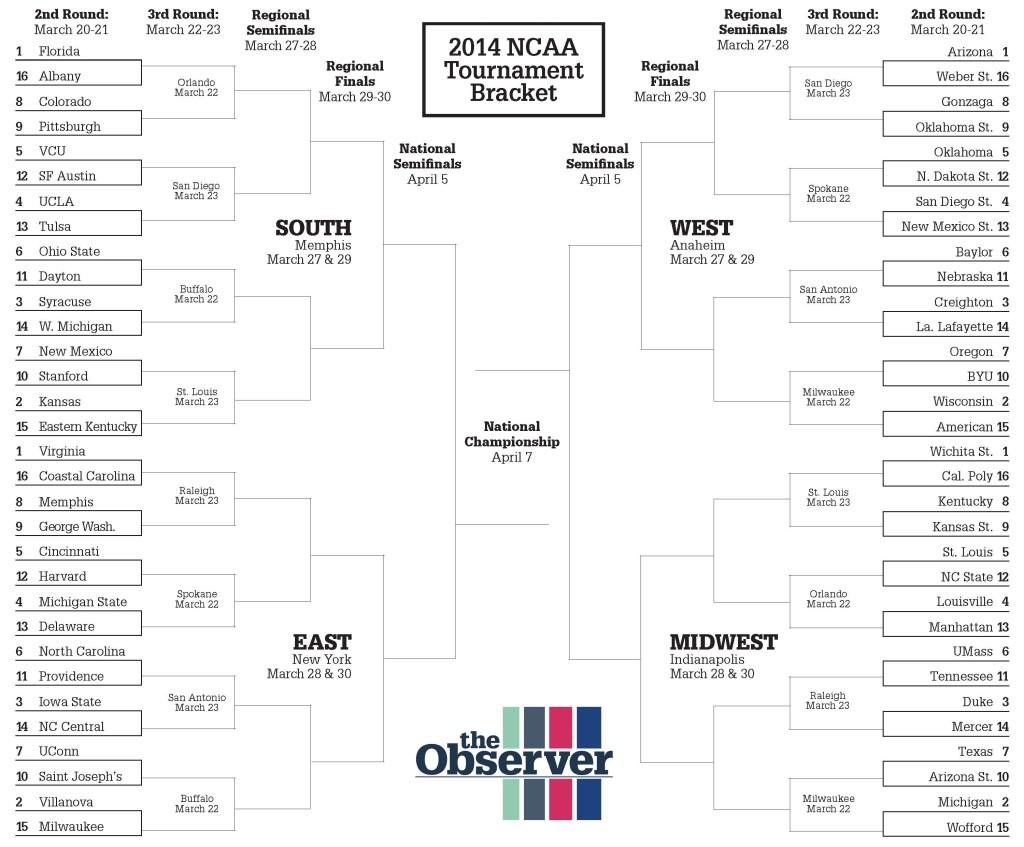 With the end of March comes NCAA basketball’s most exciting and anxiety filled time of year, March Madness.

The NCAA men’s basketball tournament pits the top 64 teams in the country against each other as they try to establish dominance, all of them trying to be the one to cut down the nets at the end of it all. Whether you are entering a bracket pool with a bunch of your friends or looking to cash in on Warren Buffett’s $1 Billion Bracket challenge, we’ll give you our top picks from each region to help you fill your pockets and get some bragging rights.

South:
No. 2 Kansas―The Jayhawks have had their fair share of growing pains throughout their season as they graduated all their starters from last year and meanwhile faced the toughest schedule in the nation. But some of their struggles have allowed them to unlock the potential of young superstars Andrew Wiggins, Perry Ellis and potential number one pick Joel Embiid. With their young threats and junior guard Naadir Tharpe guiding the way, the Jayhawks beat Georgetown, Duke and Iowa during the regular season and will look to do more of the same during the tournament.
Possible Upsets: Florida (1), Syracuse (3), VCU (5)

West:
No. 1 Arizona―As much as we’d like to go against the grain and not choose Arizona to come out of the West, it is incredibly hard to pick against the Wildcats. Arizona went 30-4 with a strength of schedule ranked fourth in the country. They pair a stifling defense with an offense that does just enough with four double-digit figure scorers.
Possible Upsets: Wisconsin (2), Oklahoma St. (9)

Midwest:
No. 4 Louisville―The defending champs are back and they are not so pleased with their seeding. Louisville sports a 29-5 record coming into the tournament with nine wins in their last 10 games and big wins during the season against UConn, Cincinnati and SMU. The Cardinals will have one of the nation’s best players, with Russ Smith driving their offense and a defense that did not allow more than 65 points in any of its three games leading up to its winning of the American Athletic Conference championship.
Possible Upsets: Wichita St. (1), Duke (3), Michigan (2)

East:
No. 4 Michigan State―The Spartans played in arguably the best conference in all of college basketball and left the regular season with a Big Ten championship in hand as well as wins over Michigan, Wisconsin and OSU. With a high powered offense that features Keith Appling as its orchestrator, Gary Harris raining threes and Adreian Payne doing a little bit of everything, the Spartans will have no trouble on the offensive end of the floor and will try to use it to run their opponents out of the gym.
Possible Upsets: Iowa St. (3), Virginia (1)