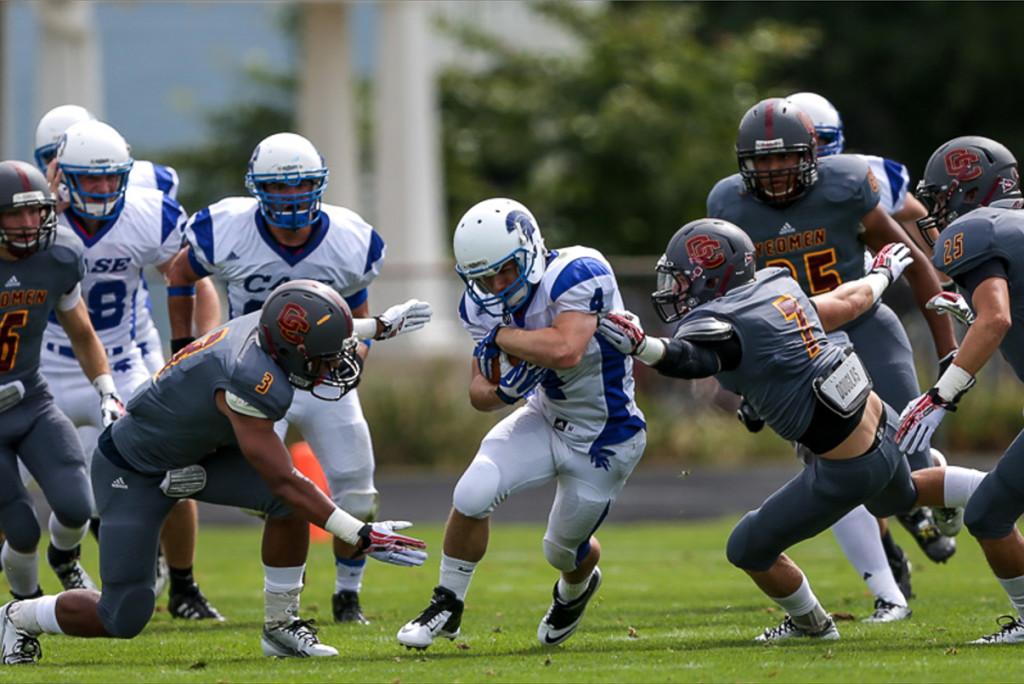 Sean Lapcevic (4), had three receptions for 27 total yards, including one 20-yard catch.

The Spartans trip to Savage Stadium on an overcast afternoon was just that: savage. With their 19-2 lose Sunday at Oberlin’s home opener, CWRU breaks a 28 game winning streak versus the Yeomen, leaving the Spartans with a 1-1 record. The last time Oberlin beat the Spartans was in 1982, when they won 17-6.

Oberlin’s game on the ground banged up the CWRU defense, with Yeomen running back Moses Richardson racking up 84 net yards on 23 carries, matching his carry number from the two team’s 2012 meeting. Another Yeomen running back, Blake Buckhannon, put 50 net yards on the board, while Oberlin quarterback Lucas Poggialli put in 78 yards on the ground along with 100 yards in the air. Poggialli managed touchdowns both on the ground and passing, and Buckhannon also put in a rushing touchdown. Overall, Oberlin cranked out 219 yards off 52 carries.

The only bright spot in the Spartan defense came from outside linebacker Everett Dishong, who turned in two solo sacks for a combined 19 yard loss, with 10 total tackles. Cornerback Jordan Esteban also put up 10 tackles and an interception. Despite quality tackling numbers, the Spartan defense failed to halt the Yeomen’s rushing onslaught.

The Spartans were plagued by technical problems throughout the game, including an incorrect formation and several bumbled snaps, issues that prevented the fast-paced play seen during the Marietta opener and created problems for the Spartan offense.

Partially, this was due to a relentless Oberlin defensive line, which constantly forced scrambled passes and held the Spartan running game to minimal yardage. The running back trio of Kenny Riordan, Ricky Hanzlick and Manny Sicre only put up 43 forward yards on 14 carries, combined. Neither Billy Beecher or Erick Olson, both quarterbacks, put up positive ground yardage, with Beecher’s six rush attempts resulting in 26 lost yards. Overall, the Spartans ground game fizzled, with only 16 positive yards on 22 total carries.

In the air, the Spartans did slightly better, with 179 passing yards. Beecher put up 110 throwing yards despite four sacks and a fumble, while Olson managed 69, though he threw an interception and was sacked once. Oberlin’s defense forced a total loss of 28 yards on five sacks, with pressure and poor throws at key moments causing conversion trouble for the Spartans, who went 2-11 on third down and 0-4 on fourth.

But despite the Spartans’ air yardage, the Yeomen defense still managed to hold them off, with not a single point put on the board while the Case Western offensive squad was on the field. CWRU’s points came from special teams play, with Albers stacking 3 blocked kicks, with one returned for a safety.