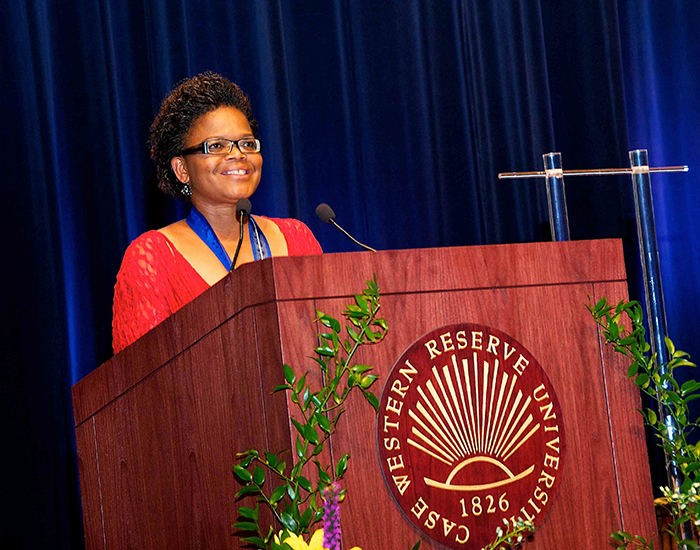 Beatrice Mtetwa, a human rights activist, speaks to a crowd at Case Western Reserve University after receiving the 2011 Inamori Center’s Ethics Prize for defending the Zimbabwe people from a corrupt government. Dr. Shannon French, director of the Inamori International Center for Ethics and Excellence said that Case students “adored her,” with some saying she was so inspiring that meeting her was a “transformational experience.”

UPDATE: Mtetwa was released on Friday, Mar. 22 after spending 7 days in a Zimbabwean prison.

The 2011 Inamori Ethics Prize recipient Beatrice Mtetwa, a renowned human rights lawyer, was arrested and charged this week with obstruction of justice in Zimbabwe after protesting the search and arrest of a fellow government opposition party member.
A high court order that called for Mtetwa’s release was ignored by Zimbabwe police, who as of press time have continued to hold Mtetwa.

“The allegation is that I have been obstructing the police in the performance of their duties,” Mtetwa said in a recorded statement to The New York Times that was snuck out of the police station where she is being held. “The view I take is they have been obstructing me in my duties as a lawyer. I have a client whose rights have been violated, and I am unable to help him because I am now an accused myself.”

Mtetwa was arrested by plainclothes police at the residence of a fellow human rights activist when she protested their warrant-less search.

Director of the Inamori Center, Shannon French, said that the Center is “outraged” by the current situation. The Inamori center is a Case Western Reserve University organization designed to foster worldwide ethical leadership.

“We believe this is an unjustified and illegal arrest and that she is being punished for her attempts to uphold the rule of law in Zimbabwe,” French said. “It’s an unjust and political move.”

Mtetwa was given the Inamori Ethics award for her stand against a corrupt Zimbabwe government and the defense of the Zimbabwe people, according to the Inamori Center.

Several of Mtetwa’s high-profile cases have included the defense of Zimbabwean and foreign journalists illegally detained by the Zimbabwe government, many of whom were reporting on the 2008 presidential election.

“She is an incredibly courageous human rights lawyer,” French said. “What we’re seeing now is that she is being jailed due to her defense of the rights of others.”

This is not the first time the Zimbabwe police have illegally harmed Mtetwa. She was jailed in 2003 for fabricated allegations that she was operating a car while intoxicated and was physically abused during her three-hour holding at a Zimbabwe police station. In 2007, Mtetwa was beaten by police on two separate occasions: for trying to serve a court order and for protesting the mistreatment of two fellow lawyers.

“This is serious,” French said. “We don’t know if that is occurring this time.”

French emphasized that students can support Mtetwa by making her story known. She encourages students to share stories about her arrest through social media and by signing circulating petitions that demand for her release.

French said, “Her safety depends on the Zimbabwe government knowing that people are paying attention.”