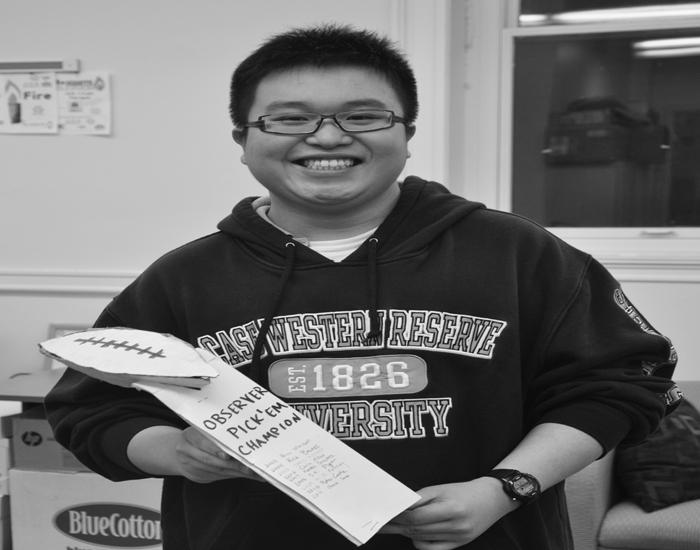 It was clear skies ahead for the majority of the season for The Observer’s 2011 NFL Pick’em Champion. The Observer’s own Shinichi Inoue took home the 2011 crown after maintaining a share of first place for nine straight weeks. Week nine saw Inoue in third place, three games behind Erica Iafelice, the women’s basketball team representative. A 10-6 week in week 10 saw a four-way tie for first place between Inoue, Iafelice, Peter Cooke, and Jon Du. From there on out, Inoue had either a share or sole possession of first place for the rest of the season. Inoue finished the season with a 174-82 record and a three-game lead.

Inoue was awarded the Stewart Paul Memorial Trophy. The award, made of cardboard, staples, tape, and tears, was first awarded in 2003 to Bill Wright.  Cooke, the 2010 champion, finished third.

Following behind Inoue were Iafelice, Cooke, and Du, who were all part of the lead pack.  The three consistently swapped positions throughout the back half of the season. Iafelice finished 171-85 while Cooke and Du finished 167-89 and 165-91, respectively.

The other six contestants formed a tightly knit pack as well but were separated from the frontrunners for a handful of games most of the season.  Varsity swimmer Heath Hudgins finished in fifth at 160-96, 14 games back while Spartan tight end Bryce Coleman and Jolly Scholar owner Matt Vann tied for sixth at 158-98. Rounding out the standings were All-American soccer forward Vinny Bell in eighth at 157-99 and CWRU celebrity police officer Mark Chavis in ninth at 155-101.

Last but not least was SAGES savant Bernard Jim who finished 20 games back at 154-102.  Jim takes home the SACKO trophy, the annual award for last place.Jim is adamant he had a chance to win, but it appears the NFL has left him puzzled.