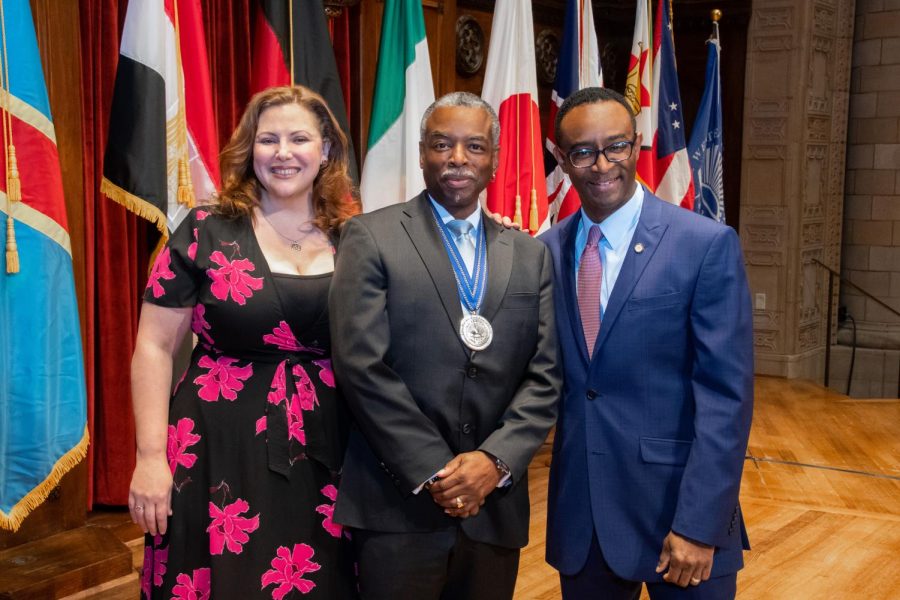 LeVar Burton recieved the Inamori Ethics Prize for his ethical leadership in the arts on Sept. 19.

“Does anyone have any questions?” asked LeVar Burton at an exclusive student meet and greet on Thursday, Sept. 20, before receiving the 2019 Inamori Ethics Prize.

He was met with silence.

What can you ask someone who for 23 years on PBS taught you how to read on his program “Reading Rainbow”? Who, as Geordi La Forge on “Star Trek: The Next Generation,” taught you that blind black engineers could save the day better than any European meathead? Who, on “Roots,” taught you that the history of the United States is not the flawless gem school taught you it was?

He eased the room by introducing himself and asking two questions: “What is your name?” and “How are you?” Most of the time, the response was a chuckled, “I’m good,” shocked that Burton could possibly care about a random student at Case Western Reserve University.

In the face of silence, he has a solution: listening. It was as if he came to CWRU for the opportunity to talk to these students, not like the students came for the chance to meet a legend.

“Nsisong Udosen, what a beautiful name,” said Burton to a third-year student. “It has its own rhythm.”

“Why did you shorten it?” asked Udosen.

“Well Nsisong, I’m kind of embarrassed,” said Burton. “LeVar rhymes with star and that’s what I wanted to be. I also started practicing my autograph at 17.”

Seventeen marks not only the age Burton began practicing for the countless Star Trek conventions he would go on to attend, but also the year he stopped studying to be a Catholic priest.

Two years later, he played Kunta Kinte in “Roots,” one of the most popular TV specials ever. In 1983, he became the host of “Reading Rainbow,” a PBS program featuring himself and other celebrities reading children’s literature, and children giving reviews of books they enjoyed. In 1987, he became Geordi La Forge, the chief engineer of the starship Enterprise in “Star Trek: The Next Generation.”

Burton said now he wants to slow down so he can preserve his energy for current projects, including his podcast “LeVar Burton Reads,” an adult-oriented podcast featuring short fiction and his membership on the board of directors for the AIDS Research Alliance.

“I’ve been living my life since I was 19 like something was chasing me,” said Burton. “As a black man, it’s not an uncommon phenomenon. I just recognize I can’t live my life like that anymore. I have shit left to do.”

What else does Burton hope to do that he hasn’t done already?

“I’d like to see America heal itself around the issue of race,” he said.

After the introductions and small talk, he steps to the center of the room. The 20-person-or-so crowd stands still, until Burton asks why no one is using the chairs.

He made eye contact with everyone in the room while he spoke, only looking away in moments of contemplation. His brown eyes pop with an intensity, whether he is speaking about Star Trek or political and social issues. He radiates an aggressively tranquil kindness; he wants you to be as present as he is.

Throughout the talk, Burton constantly prodded the group for questions and information. It usually takes an awkward silence before someone pipes up. It’s hard not to just sit dumbfounded.

As the afternoon continued, the quiet moments of awe grew brief as the conversation found its own rhythm. People asked questions ranging from the serious, “What hope do you see for the future?” to the Trekkie-oriented “What’s your favorite Star Trek episode?” For the latter, his pick was “Second Chances,” an episode he directed featuring Commander Riker meeting a duplicate of himself. The episode stood out to Burton because it enabled him to gain a new skill set, sitting in the directors chair instead of performing in front of the camera, that otherwise wouldn’t have been available to him. Burton’s choice is telling, showing he is someone who constantly wants to learn new ways to create.

“Imagination is the thing that differentiates us from other sentient species on this planet,” said Burton. “We have the ability to place our attention in a past present or future. That is a uniquely human superpower.”

A couple of hours later, Burton stood inside the Maltz Performing Arts Center, surrounded by the ornate Hebrew inscriptions of the former synagogue as he waited to receive the Inamori Ethics Prize.

When Burton’s name was announced, his lips quivered. His eyes watered. A video over his head featuring his former Star Trek castmates and other friends congratulated him for being the first person from the arts to win the prize. After the preamble ended, draped with the Inamori medal around his neck, he stepped to the side of the stage, exhaled and cried.

His acceptance speech focused less on himself and more on the four people in his life who inspired him most: his mother Erma Gene Christian, Alex Haley, Gene Roddenberry and Fred Rodgers. Each of them gave something to Burton that he said made him the man he is today.

His mother gave Burton the love of reading. Christian was the first person in her family to graduate from college, at the age of 17 from Philander Smith College.

“Seeing my mother read for pleasure made an impact,” said Burton. “It communicated to me that reading for pleasure, not just for knowledge but for enjoyment, was one of the benefits of being human.”

Burton believes reading is the ability to be free. Without the ability to understand a text, there is no way to verify information or to learn more about the world in ways that do not require direct experience. With literacy, you become open to not only the real world outside your door but to the imaginary ones inside your own mind.

“If you are literate in at least one language, you are free,” said Burton. “No one can imprison your mind, no one can put shackles on your imagination.”

Burton ended each episode of “Reading Rainbow” with “you don’t have to take my word for it,” to establish that his viewers could use the power of literacy to form their own opinions on the issues and stories he discussed.

Burton earned a full scholarship to the University of Southern California, but the scholarship did not cover books or fees. His mother took a night job waiting tables so Burton could pursue his dream of becoming an actor.

“I am the man that I am because of that woman’s love,” he said.

Alex Haley, the writer of “Roots,” a novel and television mini-series based on his family history. Haley begins the story with Kunta Kinte, a West African who was kidnapped, enslaved and brought to the U.S., and writes about his descendants up to the present day. Burton said Haley’s ability to be present and compassionate inspired him as much as his writing.

“The man changed, through the power of the pen, how a nation frames one of the greatest tragedies in human history,” said Burton. “Chattel slavery here in America.”

“I love this country desperately,” continued Burton. “I have had to deal with the fact that my country doesn’t love me so much. It hurts and I know I speak for many souls, not just my own. I see the heads nodding in this room, that my country doesn’t love me as much as I love it. Yet I persist and yet I pursue the American dream. I pursue the democracy that was promised in the founding of this nation.”

Roddenberry, the creator of Star Trek, offered a utopian multiracial vision of the world that gave Burton hope that one day the world could be free of the oppressive structures that currently exist. His casting of Nichelle Nichols as commander Nyota Uhura marked one of the first times that a black woman had a starring role on an American television series.

While talking to students, Burton said it is impossible to grow up with a healthy self image if you can’t see a positive representation of yourself in popular culture. Nichols gave that positive self image to Burton during his formative years, when most of the black people he saw on television were soldiers at war in Vietnam.

“Seeing a black woman on the bridge of the original Enterprise meant that when the future came there would be a place for me. That was huge,” said Burton. “I didn’t see a lot of black people on television in powerful respected leadership roles.”

His last storytelling mentor was Fred Rogers, better known as Mister Rogers, from the PBS show “Mister Rogers’ Neighborhood.” Burton originally thought Rogers must have just been playing a character on TV until he met the man. Burton said that—like Haley—Roger’s ability to be present was astonishing. As an ode to his late friend, he asked everyone in the room to close their eyes for thirty seconds and think of a teacher or someone who had encouraged them to become who they turned out to be.

Burton watched the time as the room, featuring representatives from the Inamori Foundation from Japan, high powered donors, and CWRU President Barbara Snyder closed their eyes.

“None of us do this thing called life alone,” said Burton once everyone opened their eyes. ”We’ve all needed to not only get help but to ask for help.”

The day after the award ceremony, Burton participated in an academic symposium with Dr. Joy Bostic, Dr. Cara Byrne and Dr. Shannon French, the executive director of the Inamori International Center for Ethics and Excellence at CWRU. Even in this academic discussion, with hundreds of people in the audience, Burton makes a point to create personal connections.

“What is your name?” asked a stunned Burton.

“Madison,” replied Owens, with the same surprised laugh given by the students at the meet and greet.

Burton went down from the panel, gave Owens a hug and said, “This is hope, y’all.”

Burton returned back to the panel, exhaled and answered.

“It is so difficult to adopt an objective mindset because we are such subjective beings,” said Burton. “Ego is what is driving the train a lot of the time, so subjectivity goes with the territory. A combination of the two, the objective and the subjective, is the ideal.”

He talked more with the panel and then made another connection.

“You were such an important person in my life when it came to reading,” said Gary Williams, who drove seven hours for the chance to see Burton. “In the third grade, I was suspended for reading too much in school. I just wanted to say thank you as a black boy who grew up in the projects of Baltimore, thank you for nurturing growth in me when other people wouldn’t.”

Burton walked down from the podium, hugged Williams and whispered something in his ear. The crowd clapped around them as they embraced.