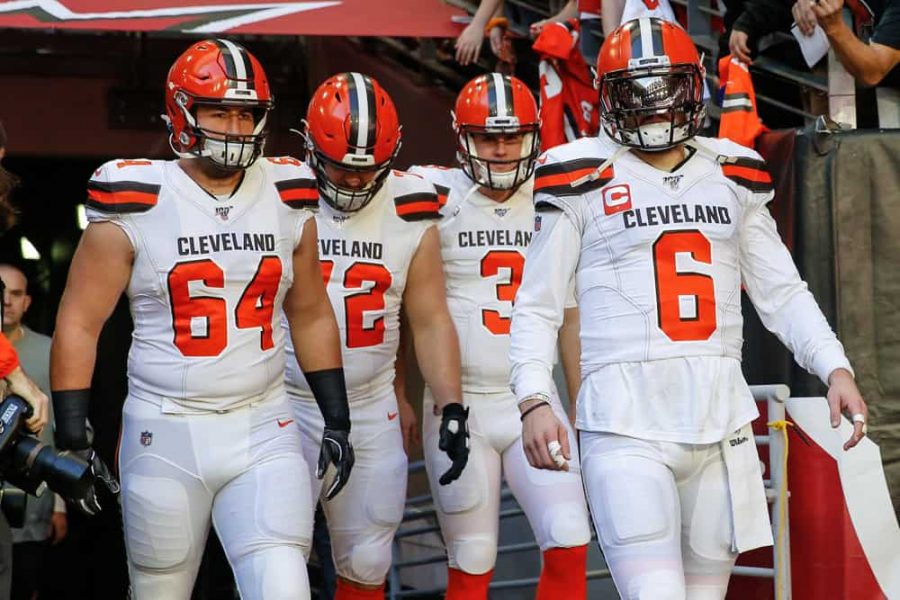 JC Tretter (left) and Baker Mayfield (right) led the Browns against the Chiefs in a hard fought battle to the end.

This January, the Cleveland Browns found themselves in unfamiliar territory. For the first time in 18 years, they had qualified for the playoffs. Under first-year head coach Kevin Stefanski, who had previously served as the offensive coordinator for the Minnesota Vikings, the Browns posted a record of 11-5. The Browns’ first double-digit win season since their 10-6 campaign in 2007 helped them finish second in their division, which, though seemingly unimpressive, earned them a playoff bid.

The last time the Browns were in the playoffs, they suffered a narrow 36-33 loss to the Pittsburgh Steelers. This year, however, the Browns returned to the same stadium and trounced their divisional rivals, putting up a playoff record 28 first quarter points en route to their 48-37 victory in Pittsburgh. This dominant performance silenced much of the negative speculation regarding the Browns. Though the Browns and their fans were joyous over the franchise’s first playoff win since 1994, everyone knew a much tougher road was ahead in Kansas City.

The Kansas City Chiefs won their first Super Bowl in 50 years this past season, largely due to head coach Andy Reid and the fearsome offensive trio of quarterback Patrick Mahomes, tight end Travis Kelce and wide receiver Tyreek Hill. This season, the Chiefs showed no signs of slowing down, posting a league-best 14-2 record and winning all eight away games.

Though taking on the Chiefs in Kansas City seemed like a daunting task, the Browns proved time and again this season that they were not to be taken lightly. Third-year quarterback Baker Mayfield posted his best statistical season, and the running back duo of Nick Chubb and former Chiefs Pro Bowler Kareem Hunt wreaked havoc on defenses week after week.

Mayfield also knew what it was like to play with and against Mahomes, given their history in college. After Mayfield got injured in a game playing for Texas Tech University in 2013, he lost the starting QB role to current Buffalo Bills quarterback Davis Webb, with Mahomes as backup. Mayfield then transferred to the University of Oklahoma, where he emerged victorious against Mahomes in an epic quarterback duel. Despite Mahomes’ 734-yard passing performance, which included five touchdowns and an additional 85 rushing yards with two rushing touchdowns, Oklahoma rallied behind Mayfield’s 545-yard, seven-passing touchdown feat to beat Texas Tech 66-59.

The familiar foes squared off in Kansas City on Jan. 17 with nearly 17,000 fans in attendance. The Chiefs took the lead early, with Mahomes rushing for a short touchdown and launching the ball into the stadium’s upper deck in celebration. Chiefs kicker Harrison Butker missed the extra point, solidifying the score at 6-0. The Browns’ subsequent drive culminated in a successful 46-yard field goal attempt from kicker Cody Parkey to cut the Chiefs’ lead down to 3.

Parkey’s previous playoff experience was nightmarish, to say the least. While on the Chicago Bears two years ago, Parkey had missed an attempt at a game-winning field goal against the Philadelphia Eagles in the first round of the playoffs. This infamous “double doink” ball bounced off the goal post twice and cost the Bears the win. However, Parkey bounced back and nailed every kick he took this game.

Unfortunately for the Browns, the Chiefs’ high-powered offense continued to steamroll the Browns’ defense. Kelce capped off the Chiefs’ drive with a 20-yard receiving touchdown as he muscled his way through the Browns’ defenders to put the Chiefs up 13-3. Kelce, a Cleveland-area native, ended the 2020 season by setting the NFL record for most receiving yards by a tight end in a season with 1,416.

The Browns continued to struggle to find the end zone, with Mayfield catching his own deflected pass on third and 20. Though an athletic play, the Browns lost 8 yards and were forced to punt. The Chiefs’ lead continued to swell as Butker nailed a 50-yard field goal and the Browns lost the ball by a controversial ruling, resulting in another Butker field goal before halftime. The controversial ruling occurred when Browns receiver Rashard Higgins fumbled the ball just a yard away from the end zone. The ball rolled through the end zone and out of bounds, which by rule took the ball from the Browns. Though the ruling by the officials was correct, the incident has sparked criticism against this rule due to its unfair and illogical impact on the game.

The Browns entered the second half trailing 19-3. Mayfield’s struggles continued as he threw an interception caught by Chiefs safety Tyrann Mathieu. This deflating turnover wasn’t too costly, as Butker missed a 33-yard field goal attempt. The Browns finally found the end zone with a short touchdown pass from Mayfield to receiver Jarvis Landry, cutting their deficit down to 9.

Misfortune struck for the Chiefs on their following possession. Mahomes was knocked down and had to leave the game to be evaluated for a concussion. With backup QB Chad Henne stepping in, Chiefs fans feared that the absence of their star quarterback may give the Browns a fighting chance. Though Henne led the Chiefs down the field for another Butker field goal, the Browns chipped away at the lead with another touchdown, this time on a run from Hunt. With the Browns only trailing 22-17, Chiefs fans’ fears were becoming a reality as Henne lobbed an inaccurate pass into the end zone that was intercepted by Browns safety Karl Joseph.

However, the Browns made an interesting call to punt on fourth and 9 with less than five minutes remaining in the game. Although opting to convert for 9 yards on one play with the game on the line seemed risky, putting the ball back in the hands of the best offense in the league was riskier. Henne’s heroic 13-yard run on third and 14 was followed by a 5-yard pass to Hill on fourth and 1. The Browns, out of timeouts, watched in dismay as Henne kneeled to run out the clock and end the season for Cleveland.

Though the Browns’ championship run ended in failure after an impressive regular season, the team’s playoff win revealed that their season was no fluke. Next year, they will be back to pursue the franchise’s first Super Bowl win.

As for the Chiefs, this game further cemented Reid’s legacy as one of the NFL’s greatest coaches. With the win over the Browns, the Chiefs became the first team ever to host the AFC Championship in three straight years, all under Reid as head coach. As for the only team to host the NFC Championship in three straight years? The 2002-2004 Philadelphia Eagles, all under Reid.