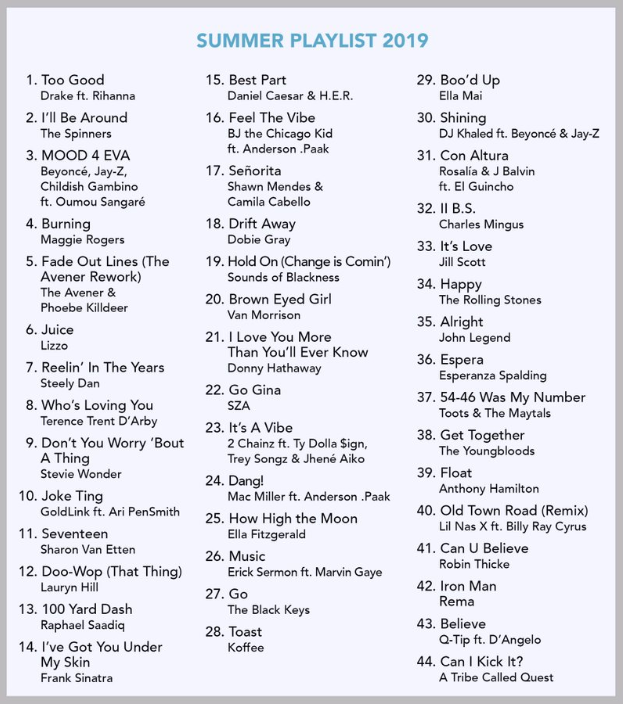 Everyone has a summer playlist. Mine is 6 hours and 47 minutes long and full of both classic and modern hits, it’s called “White Claw Summer” on Spotify but that’s for another article. The summer playlist up for review this week is by none other than Barack and Michelle Obama.

Let’s look at the artists. Some are obvious, like Jay Z and Beyoncé, who are longtime friends and supporters of the Obamas. Others, like Ella Fitzgerald and Frank Sinatra, were famous long before the pair were born, making their inclusion unexpected, but not surprising. Their songs are classics for a reason and their spot on this playlist is absolutely justified.

More recent artists like Lil Nas X, Lizzo, SZA, Shawn Mendes and Camila Cabello were also featured on the Obama’s playlist. Their recent songs command the billboards and radio stations, and now can lay claim to spots on the presidential summer playlist.

On Twitter, president number 44 described his mix as “a sampling of what Michelle and I have been listening to — some new, some old, some fast, some slow.” While the mix seems a little eclectic, giving it a listen proves that the songs have more in common than you’d think. Some might believe a playlist that ranges from Lizzo to Steely Dan might not work, but the song selections all have that easy-listening vibe that makes a great summer playlist.

Despite the variety of music genres, the playlist is fairly seamless. Within the first few songs, the mood is quickly established when Beyoncé does her thing and everyone is having a good time. Even with the genre diversity, there is no whiplash until Frank Sinatra comes on with his slow, jazzy rendition of “I’ve Got You Under My Skin” directly after Raphael Saadiq’s up-tempo soul/funk “100 Yard Dash.” If Sinatra had been placed elsewhere, maybe around Fitzgerald, the playlist would have been smoother, but that is my only qualm with the flow of the playlist.

As for song choices, it is hard to find fault with anything specific. Personally, I might not have featured every artist the Obamas did, like Robin Thicke, or even specific songs from each artist, like “Shining” by DJ Khaled. I find these choices very interesting, as it gives us a glimpse into what sort of people the Obamas are, based solely on their musical taste.

While listening, I found myself wondering if the song playing was chosen by Barack or Michelle, or if the two had agreed in its inclusion? Generally speaking though, these are easy listening songs, many of which are perfect to sing or dance along to. This summer playlist would fit any outdoor occasion, be it a beach day or barbeque.