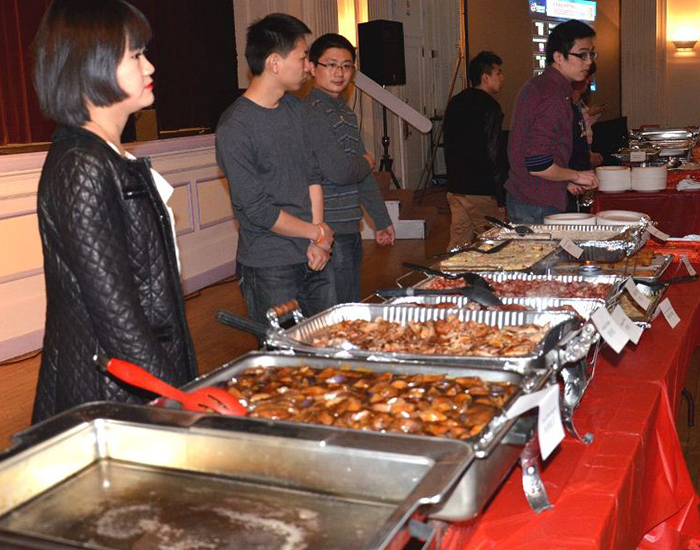 Members of the Chinese Students and Scholar Association serve food at their event last Sunday.

On Sunday night, Feb. 24, the Chinese Students and Scholar Association (CSSA) hosted their annual Lantern Festival Banquet to celebrate the arrival of the Year of the Snake. The night was filled with traditional Chinese festival celebrations and a combination of performances by Case Western Reserve University students. Every year around the time of the Chinese Lunar New Year, CSSA welcomes the new year along with showcasing Chinese cultures to the CWRU community.

“We understand for many of our international Chinese students this is the first time they weren’t able to celebrate the Lunar New Year with their family, and it’s our goal as CSSA to provide that festive, family-like atmosphere for the students,” said Qiong Wu, the current President of CSSA.

The preparation for the big event began months ago with the initial auditions and host selection. Undergraduate and graduate students put all of their talents on the line and auditioned for a chance to be one of the ten performances for the night.

Han Hui Ren, the Treasure of CSSA, spoke of the preparation. “This year, we explored all the possible options that we thought would make the event one of the best we have ever had. We went through various candidates to find the right performances that would both entertain the guests and make the night memorable.” The series of performances included a mix of traditional Chinese music and some English hip pop songs.

After a month of auditions, it came down to the final preparation for the event itself. At 6:00 p.m. on Feb. 17, which led into the late hours of the night, over 50 club members helped prepare for the rehearsal. Then on Saturday, mere hours before the doors opened to the guests, volunteers and CSSA members worked tirelessly to setup and finish the last rehearsal run. Han Hui noted, “I was amazed at the dedication shown by our club members. These students took the time out of their hectic schedule to come and help make the event as successful as it was. I just want to thank them for their efforts.”

A major change this year was having four hosts on stage. Unlike traditional events where there are only one host and a hostess; CSSA brought in a two pairs of host and hostess – allowing more conversation and liveliness between the presenters. One of the hostesses was Bowen He, a third year political science and German double major.

She spoke well of the experience. “I haven’t done any hosting for quite a few years since I graduated from high school, so I was a little bit nervous before rehearsal. However, once I actually got on the stage, faced a room full of 350 people, the nervousness was gone. Once I regain my confidence, I think I did a pretty good job.” The witty and sometimes quirky exchanges between the hosts and hostesses brought laughter to the audience throughout the night and kept the excitement of the event going.

The event kicked off at 5:30 p.m. with various Chinese exhibitions in the Thwing Center Atrium. The guests had the opportunity to paint their own Chinese lanterns and practice their calligraphy skills. The Thwing Ballroom doors opened at 6:00 p.m. as guests began flocking into the place. For an hour, they had the chance to interact with friends, classmates, and other guests while enjoying some traditional Chinese Lantern Festival cuisines. Qiong said, “We want our guests to enjoy the dinner as if they were having Thanksgiving dinner at home. We were hoping that during the meal, the guests would be able to interact and converse with their friends and classmates, and simply just get away from the busy academic life at CWRU. The dinner also helped create a home-like atmosphere for everyone.”

The performances throughout the night included a showcase of various musical talents such as a guitar solo of Maroon 5’s “Payphone” and the rap verses of Eminem’s “Love the Way You Lie.” The dance performance by CWRU’s “Girl’s Generation” was another highlight of the night.

London Holt, one of the four performers of the act “Cross-Talk: Three and a Half,” said, “I really enjoyed performing because I could see how enjoyable it was for everyone. I know the lantern festival and the event were both very important from a cultural standpoint so me performing was just adding to the amazing-ness of the wonderful gathering. Our performance, as I performed with others, was pure fun. Nothing more, nothing less. And I will never forget that day.”

In the middle of the performances, CSSA took time to reward their guests with the first of two raffle drawings. “We want to give back to our guests. We want our guests to walk away with memorable night and, for some lucky few, maybe a prize or two,” Qiong added. The lucky guests were able to walk away with some great gifts, but the main prize of the night – a roundtrip ticket to San Francisco – was still waiting to find its new owner.

The night ended with the final prize drawing and a performance by the entire CSSA executive board and staff, including Qiong dancing to Gangnam Style. When asked about the entire event, Qiong said, “Overall, it was a wonderful experience. Not only are we celebrating the Year of the Snake, we also wanted the Chinese students here at CWRU to feel at home and give our American classmates a glimpse into the Chinese cultures and traditions.” Han Hui added, “I think what CSSA has done tonight truly exemplifies the diverse and rich cultures we are so blessed to have at CWRU. We as students are not only here to study various subjects, but we are also here to understand, explore, and enjoy the different aspects of this world that we often miss when we submerge ourselves in our academic careers. I am really glad that CWRU has put so much emphasis on diversity of cultures and it truly showed here tonight.”