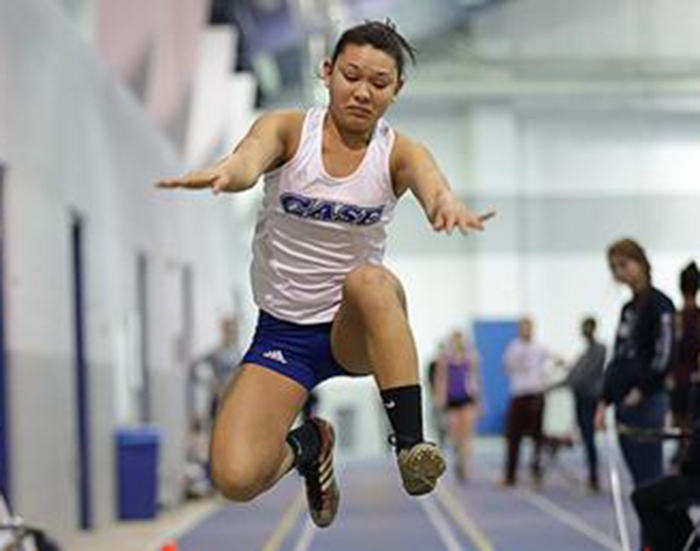 Junior Thenessa Savitsky set a program-record in the triple jump an earned a third place finish as the Case women finished seventh in the UAA Indoor Track and Field Championship.

Led by a school-record performance in the triple jump by junior Thenessa Savitsky, the Case Western Reserve University women’s track & field team finished seventh. The men finished fifth with an individual title by junior Harry Weintraub in the shotput at the 2013 University Athletic Association Indoor Championship Meet that concluded on Sunday, Feb. 24, at the Veale Center.

On the men’s side, Carnegie Mellon University, last year’s indoor runner-up, ran away with the association title with 139 points. University of Chicago placed second with 87, Washington University at St. Louis came in third at 78, and Emory University was fourth at 69. The men finished the two-day event with 48 points.

The men finished sixth last year in the indoor meet before improving to third in the outdoor championship.

On the track, the mile run duo of seniors Chris Kelly and Phil Yeung placed fourth and fifth respectively, with times of 4:22.64 and 4:22.78. Yeung’s time was a career best indoor mark. The duo also ran anchor and leadoff for last night’s runner-up distance medley relay.

Belew then teamed with fellow rookies Jonathan Freeman, Perry Billett, and Abdallah Soliman to cross the line sixth with a time of 3:32.50 in the 4x400m relay.

Junior Andrew Barnhart, who was fourth in yesterday’s long jump, scored in the triple jump with a sixth-place mark of 40’9.50”.

Junior Harry Weintraub turned in a career best throw of 57’9.5” for an association championship. Joining Weintraub on the podium was senior teammate Izzy Budnick, who placed third with his own personal best throw of 50’8”.

Also in field events, freshman Joshua Malone just missed out on All-UAA honors with a fourth place performance in the high jump at a height of 6’2.25”. Carnegie Mellon’s Michael McDermott finished at the same height but cleared the bar in fewer attempts.

Junior Andrew Barnhart also came in fourth in the long jump with a season-best mark of 20’9”.

On the track, the Spartans picked up a key eight team points with a runner-up finish in the distance medley relay. Phil Yeung in the leadoff spot followed by freshman Abdallah Soliman, junior Michael Perisa, and Kelly in the anchor position crossed the line in 10:20.48.

Savitsky posted a best jump of 36 feet even to finish third with All-UAA honors. The third year Spartan reached the UAA podium for the first time in her career.

Also in the triple jump, sophomore Keri Walter, the previous school record holder in the event, finished sixth with a mark of 34’0”.

In the shot put, senior captain Jenna Pansky just missed All-UAA honors with a fourth-place showing in the shot put with an indoor career best throw of 35’4”.

Freshman Laurel Shickler placed sixth in the high jump clearing the bar at 5’1.25”.

On the track, junior Gavriella Pora tallied team points with a fifth place time of 27.23 seconds in the 200-meter dash.

Senior Emily Tran placed fourth in the weight throw with a season best mark of 39’4.5”.

Sophomore Sophia Herzog also hit a season best mark and turned in a fifth-place height of 10’6.25” in the pole vault.

The indoor season now turns to the Carthage College “Gill Athletics Final Qualifier” next Friday, Mar. 1 at 3:30 p.m. at Tarble Athletic and Recreation Center in Kenosha, Wisconsin. Select student athletes will look to improve marks in hopes of qualifying for the 2013 NCAA Division III Championship on Mar. 8-9 in Naperville, Illinois.