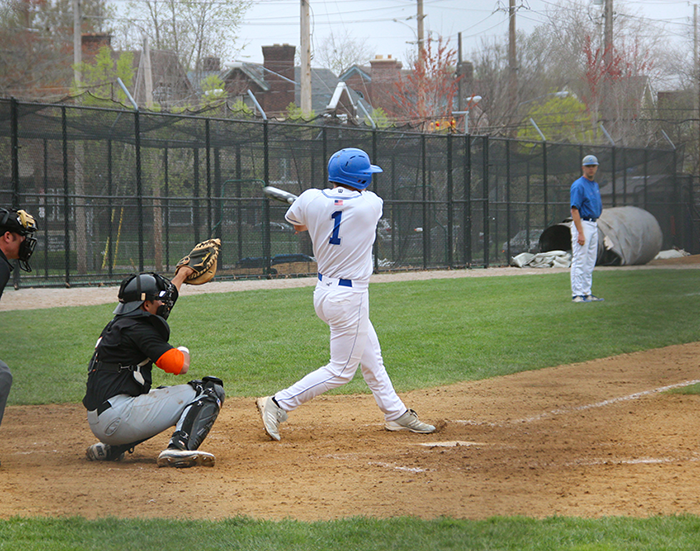 Senior shortstop Matt Keen has been one of the top batters for the Spartans, batting .321 while also leading the team in both home runs (2) and RBIs (13).

Centerfielder Paul Pakan – The senior centerfielder is once again off to a hot start this season. Throughout the first 14 games of the year, he leads the Spartans in hits with 20 and has collected six doubles – another team high. Pakan also holds the third highest batting average (.351) among the Spartans. His best game came against the University of Rochester during the UAA Championship tournament where he went 3-for-4 with two extra base hits – a double and a homerun to drive in two runs. During the three-game series against Heidelberg, he went 3-for-12, collecting one double and two runs batted in. However, look for Pakan to heat back up this weekend against Ohio Wesleyan.

Shortstop Matt Keen – Fellow senior Matt Keen is also off to a scorching start this year. Keen has 118 hits on the season and leads the Spartans in RBIs with 13. He currently shares first place in doubles with teammate Pakan. The senior shortstop also has visited home plate the most with 15 runs scored. Keen is riding his second six-game hitting streak. Over the last six matches, Keen is batting .333 after going 8-for-24, scoring a total of seven runs and driving in two runs. Keen’s best game was against Washington University in St. Louis where he had two homeruns and three RBIs to go with them.

Infielder William Meador – Fresh off his first UAA Hitter of the Week honor, Meador currently leads the team in batting averages with .378. The sophomore batted .556 after going 5-for-9 over the weekend against the Heidelberg. The second-year Spartan doubled, drove in a run, scored three runs, earned three walks, and was successful in his lone stolen base attempt. He has scored 12 runs to go with his nine walks and two stolen bases. The infielder is also fourth in total base hits with 17 in the season.

Top Pitchers for the Spartans:
LHP Jarrett Gish – In a 4-1 victory to open a three-game weekend series against then No. 14 nationally-ranked Heidelberg University, the lefty pitched the fifth complete game of his career to improve to 3-0 on the season with an impressive earned run average of 1.20. In nine innings of work, Gish allowed only one unearned run on six hits and two walks, while striking out four. The southpaw currently leads the Spartans in wins and has tallied 30 innings pitched. He trails teammate sophomore Kevin Johnstone by one strikeout with 17.
RHP Kevin Johnstone – In four game starts this season, Johnstone has logged 28.2 innings with one victory under his belt to go with 1.26 ERA. During his last outing against Heidelberg, the righty pitched a completed game allowing just five hit and two runs with one earned run. Johnstone gave up three walks and recorded seven strikeouts.

LHP Jamie Hora –Fellow ace to Jarrett Gish, Hora has pitched 16.2 innings over four games. While the lefty has struggled, surrendering nine earned runs, 21 hits, and recording an ERA of 5.94. Hora has compiled 11 strikeouts and is third on the team with innings pitched. As the season progresses, look for the senior to fine-tune his mechanics and rebound back to his 2012 shape where he posted a perfect 8-0 record with a 4.16 ERA, 51 strikeouts, and one complete game in 62.2 innings of work to tie school record for wins in a season.