A colorful weekend in Cleveland 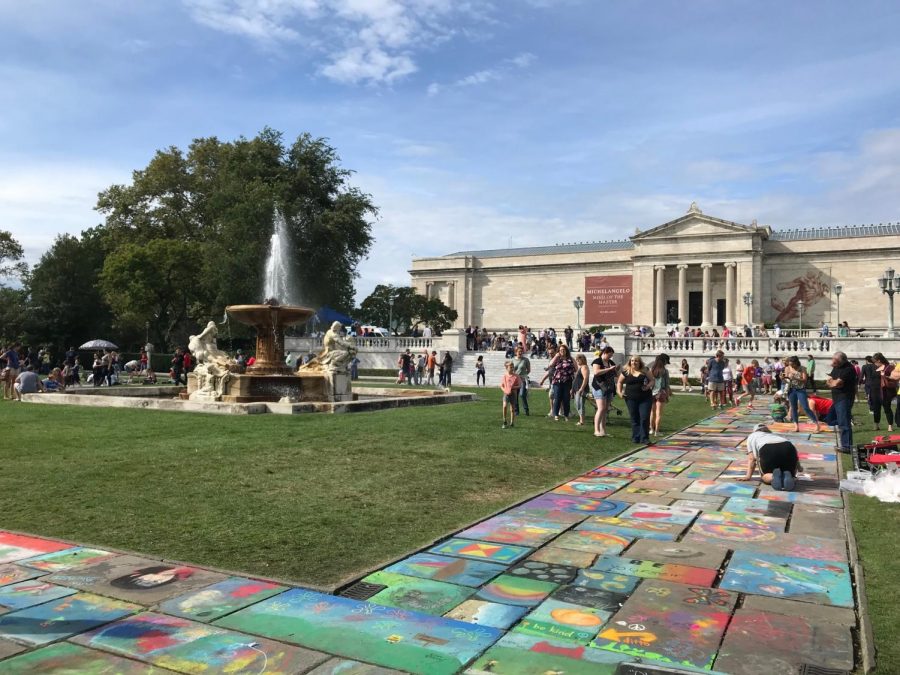 This past weekend, students, kids, adults and artists alike let their creativity shine on the walkways of the Fine Arts Garden as a part of the Cleveland Museum of Art’s annual Chalk Festival.

From intricate to simple, some with jaw-dropping designs, the original creations lined the sidewalks. With a mix of portraits, landscapes, quotes and geometric patterns, there was so much variation in the brightly colored artwork that it was hard to love just one.

Starting in 1990, the Chalk Festival has continued to be a huge hit within the Cleveland community. According to the art museum’s website, the festival is “a modern expression of a Renaissance tradition from 16th-century Italy in which beggars copied paintings of the Madonna by Raphael and his contemporaries, using chalk on the plazas outside cathedrals.”

The amazing designs done by the Cleveland community are certainly a nod to this early tradition.

Every year during two days in September, anyone can come to the art museum to either chalk their own design or simply admire the work of others.

The Chalk Festival not only promotes the importance of art in our community, but also the act of using our minds creatively for enjoyment. For $10, participants receive a small square of walkway and a 12-color box set of chalk, or, for $20, a large square with a 24-color box set.

“The Chalk Festival was a super fun event that was able to bring people of all different ages and artistic skill levels together. I loved seeing all of the different works and what they meant to people. I’ll definitely be coming back next year,” second-year student Kayla Reece said.

Personally, my time at the festival was enjoyable and inspiring. Not only did I have the opportunity to chalk my own square, but I was also able to see the talent of those around me. The excitement on little kids’ faces tugged at the heartstrings, and the smiles of all those around me made the event even more rewarding. Despite that this was only my first year in attendance, I can guarantee that it will be something I attend again next year.