A conversation with Angela Lowery 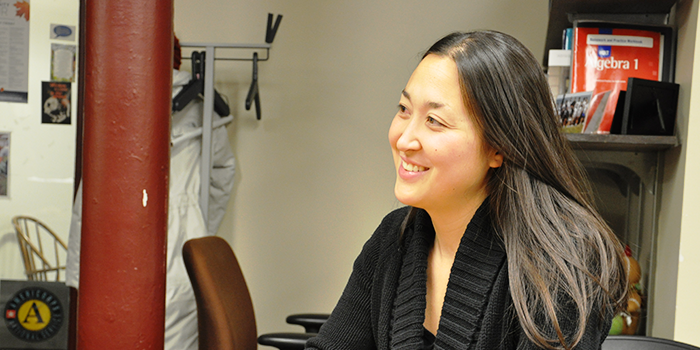 Angela Lowery is the student service coordinator at CWRU’s Center for Civic Engagement and Learning. She is very involved in two of CCEL’s major programs: CCEL Fellows and CCEL Scholars, two programs that aim to boost civic engagement across campus.

Mike McKenna: Can you tell me about the CCEL Fellows program that you help run?

Angela Lowery: The CCEL Fellows program is a program specifically for first year students. This is our fifth year of doing it with this model. The reason that we target first-year students is to engage them and have them work with a small cohort of students, get to know the Cleveland community, learn to understand community and social issues, and also be leaders of civic engagement on campus. Our thought process is that first-year students really have the best opportunity to be good leaders on campus for a longer time.

MM: How is the program different then other programs that CCEL runs?

AL: The program is a little unique from other programs that we do like CCEL Scholars because there is an application process. This year, we received over 100 applications, which was great. This was more than we have ever had before. We ended up interviewing about 75 people to get to know people better. Then, we place the people that we hire based upon their interest. This is a little different from CCEL Scholars, because people do not have to go out and find their own places to work. We really work with our fellows and coordinate the placements with the agencies.

MM: What was the application process like with so many first year students applying?

AL: Going through the application was really hard, because it is so hard to see what someone is like based upon paper. We did 10-minute interviews for the people that we did interview, but even there it is hard to bring it down. We tried to get a sense of them, but at the end of the day it was really about what people are interested and what our non-profit partners are. In addition, a huge part of picking people was schedules, because we had to match people’s schedules with when the nonprofits were available. We had to turn down really qualified people.

MM: Where will the CCEL Fellows be working this semester?

AL: This year we have 11 fellows, which is about double what we have had in the past. Each one of them is at different non-profit groups including, the West Side Catholic Center, Old Brooklyn Health Center, the Famicos Foundation, Family Promise, International Services Center, the Care Alliance, and The Intergenerational School. We really tried to have the sites focus on human services, because we will be spending a lot of time talking about things like the root causes of poverty and other issues related to poverty.

MM: What have the nonprofits reactions been to this program in the past?

AL: They have really enjoyed it, because it does give them a dedicated student that they work with. Because we are very hands on, we can help supervise and support the students – so it is not all on the nonprofit to assist in their learning. In the past, we have had students be fellows their first year and continue to volunteer for the organization all four years. We actually just had a student hired at the nonprofit that she worked with when she was a fellow.

MM: What do the students do outside of their work at their sites?

AL: The program begins with a retreat this weekend where the fellows get to know each other, explore Cleveland and get introduced to some of the issues that we are going to be talking about. As a group, we will then meet every other week for a seminar component, which is more educational then when the scholars are on site. At the end of the program, the fellows will be doing a final project, which is aimed at allowing the students to share their experiences with other students.

MM: Can you tell me about the Civic Engagement Conference?

AL: This is the first year that we are doing the Civic Engagement Conference. It’s Saturday, Feb. 9, from 12 p.m. to 4 p.m. The reason we came up with it, was while we have always had scholars attend trainings, in the past, they were kind of piecemeal. There would be one on this day or this day, and it became hard for scholars to fulfill the requirement. We figured that this was a really good way to consolidate this, and just make it one big event. It really emerged first as a way to provide that training for the scholars, but then as we looked at it, there were so many other groups on campus involved in service, if we’re going to host this big conference, we should open it up to a broader audience so we contacted Alpha Phi Omega and Lamb Beta Nu and they are our co-sponsors.

MM: What will be going on at the conference?

AL: I think it’s going to be a really great initiative. We have a key note speaker coming, Bill Kitson, the president of the United Way of Cleveland, so he’s going to kick off the conference and talk about his leadership with the United Way and about how he has incorporated service into his life. And then we’ll have a world café style reflection, which will give students a chance to talk to other students about the service that they are doing, and dig deeper into what service means. After that, we will have two breakout sessions. The breakout sessions are cool because we invited student groups to propose sessions. We’ll have sessions from Labre, GELS, Habitat for Humanity, and Student Sustainability Council. So, we will have sessions from student organizations and local non-profits as well.

MM: How could interested students register for the event?

AL: There will be a registration form online on the CCEL webpage starting Monday, and they can select the sessions that they want to attend there.