A conversation with comedian Hannibal Buress 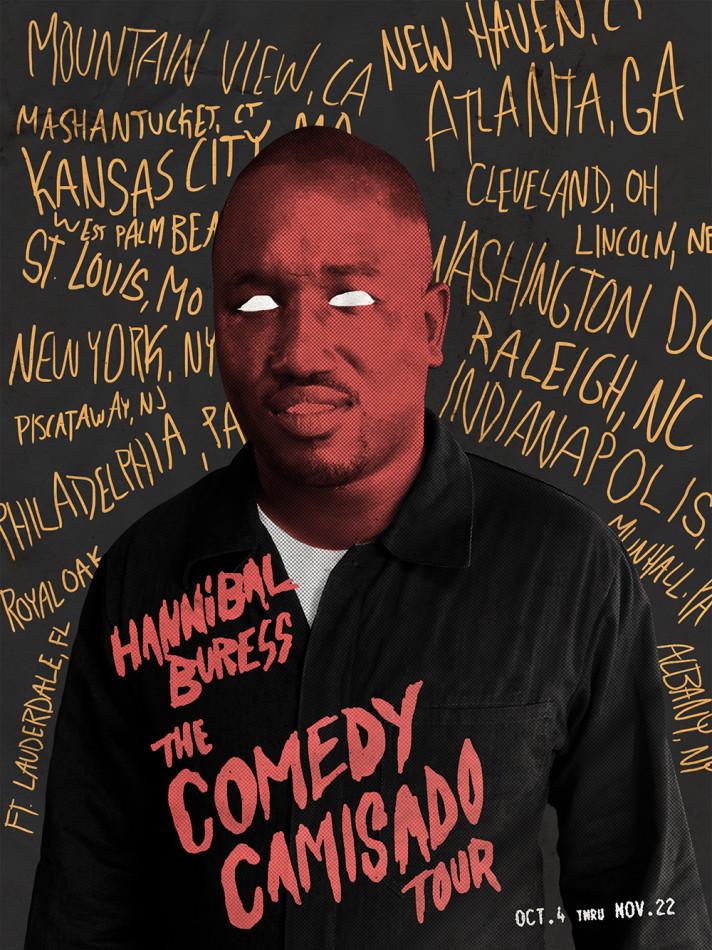 Hannibal Buress is on his way to becoming a comedy legend. With two Comedy Central hour specials, writing credits on “Saturday Night Live” and “30 Rock” and a new headlining stand-up tour under his belt, Buress is one of the biggest names in the business. I called in to Buress to talk about his stand-up, his dream collaborator and his kickboxing classes to preview the Cleveland stop of his Comedy Camisado tour, which will hit the Ohio Theater in Playhouse Square on Oct. 12.

Q: Tell me about your Comedy Camisado tour.
A: The Comedy Camisado tour is a revolution, Julia. It’s just people coming together to get a spiritual experience. I like to consider myself sort of a Tony Robbins type figure in the comedy game, so people leave my show with their lives being changed and being motivated. And a little bit drunk, but mostly motivated. So that’s what I’m doing. I’m just taking this around the country and just trying to change lives and get people to try to achieve their goals and also get them to be more sexually active and drink more water.

Q: What made you decide to start doing stand-up?
A: Boring, Julia! Next question.

Q: Next question, okay. So you wrote for “30 Rock,” what was that like?
A: It was a lot of fun. It was cool. It was one of my favorite shows before I started working there, so to get a job writing there, it was pretty amazing. I got to work with some Emmy winning writers and actors, and learn from them. It was an awesome experience.

Q: What was your favorite job that you ever had?
A: Stand-up comedy. I really never had any other jobs. I started stand-up when I was 19, and I’ve done promotional work or part-time things, but, you know, mostly stand-up. One of my favorite jobs within stand-up is the “Oddball Tour.” I’ve been on it the past two summers. You perform in front of huge crowds, like 18,000-20,000 people. So that was my favorite job within stand-up.

Q: If you could work with any person on the planet, who would it be?
A: I would work with Waka Flocka [Flame], the rapper. We would do a duo stand-up. Both of us on stage at the same time. We’d be called Flocka Burress or Hanni… Hanniwaka. That’s H-A-N-N-I-W-A-K-A. We’d just crush it. We could tour. Me and him have different energies. He’s a high energy guy, and I’m low energy most of the time. The comedic chemistry would be crazy. We’d just tell jokes, and he’d crush it, I’d crush it. He’d close with songs. It would be just an amazing experience.

Q: What are your upcoming projects?
A: I just finished up a movie called “Band of Robbers.” That should come out early next year. It’s based on a Mark Twain book. I’m excited for that. It’s like Tom Sawyer and Huckleberry Finn in current times. I also did a movie “Flock of Dudes” with a bunch of people, Kumail Nanjiani, Eric Andre, Chris D’Elia, a lot of people in that movie. “Broad City” season two is coming out in January, Eric Andre show season three in November. And just trying to stay alive, trying to get in shape. I’m going to get in great shape. I’m about to start going back to kickboxing class, I haven’t been going as much. But when I did go it was a good class, and you burn a lot of classes. So that’s my upcoming project, kickboxing class.