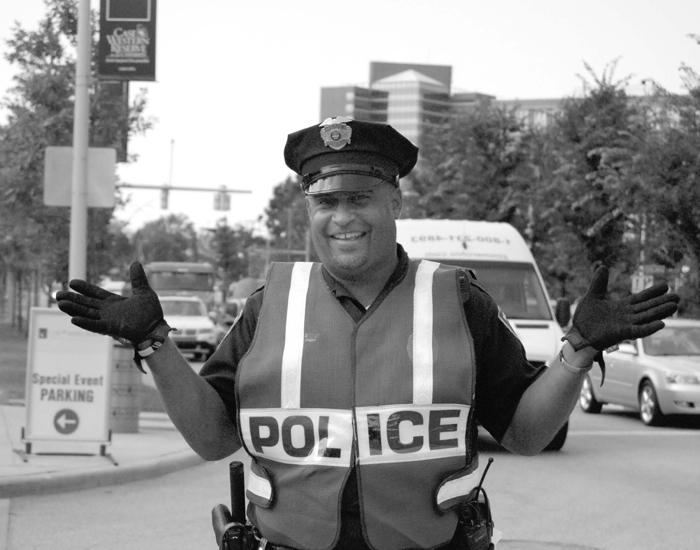 Officer Mark Chavis is one of the Case Western Reserve University’s police officers. He is most prominently known for his daily work of helping students and faculty safety cross the busy Euclid intersection. He is always smiling and knows many students on first name basis. Throughout his tenure at CWRU he has ensured student safety, and as a result has become an irreplaceable part of the CWRU community. His notoriety is so great that he has even generated his own facebook fan page, “Officer Mark the Crossing Guard.”

Sean M. Hobson: Hello Officer Mark, how are you?

SMH: To start, where were you born?

OM: I was born and raised in Cleveland

SMH: What inspired you to become a cop?

OM: I’m not sure if you remembered, but there was a shooting a while back in 2005. I was working as a security guard at CWRU back then and that’s when the University decided to turn their force into a police force. And so, I went along with it and became certified. We became the Case Western Police Department and have been doing our best to help and protect students.

SMH: That’s very interesting. I wasn’t aware there was a jump from security to official Police.

OM: Yeah, I wasn’t one of those 21 year olds who went out to become a police officer. I was working corrections before. But I’ve always enjoyed helping people, especially the youth. I even became a foster parent. So working at CWRU being around these college kids is perfect for me. We, the Case Western Police Department are all like that. We enjoy helping the students here.

OM: I don’t really have one because I don’t eat out a lot. I love to cook.

SMH: How did you become such a good cook?

OM: I learned from my father. Both my parents worked and my mother got home later. So my father cooked a lot, and I just watched and learned from him.

SMH: You’re certainly an inspiration to all the male students here at CWRU who depend on the cafeteria.

OM: You have to learn eventually.

SMH: What do you do in your free time?

OM: I’m a big outdoor person. Camping, hiking, fishing—I’m a big fishing person. So working outside on Euclid is great for me.

SMH: Fishing? That’s rare to hear. Is it the peace and tranquility about fishing that draws you to it?

OM: No, its definitely about catching meat. [Laughter] I do it because I like to catch fish I can eat.

SMH: Who is your favorite actor/actress?

OM: I’m an action person myself. I really liked the Transformers Movie. And I just saw Salt yesterday. It was awesome. Angelina Jolie could also be my favorite actress. Her and Halle Berry are amazing.

SMH: Who is your favorite athlete?

OM: Brett Favre. He’s able to maintain himself and play well despite so many changes around him.

SMH: How do you feel about LeBron James leaving?

OM: I don’t think one man can win a championship. The good thing about LeBron is that he’s strong and aggressive, but he also doesn’t play consistently. He’s certainly not the best NBA player I’ve ever seen. And him leaving Cleveland, that’s his lost. This city has the best fans. What other city do know of that kept its colors for four years without a football team? No other city has done that. I just think it’s his loss.

SMH: If you could relocate, where would you go and why?

OM: Ohio has some of the best farmland. Besides here, I think I’d go someplace like Wyoming. I’d buy a ranch and just live in peaceful isolation. One thing I have to mention though is that a Cleveland person can go anywhere and live. We can adjust to any lingo and locale, that’s just the type of people we are.

OM: I really like the concert that’s done every year during freshman week. I try to work that whenever I can because I already know the faces on campus, but that concert gives me a chance to all the new faces.

SMH: Thank you for your time Officer Mark. We all appreciate the work you’re doing on Euclid.