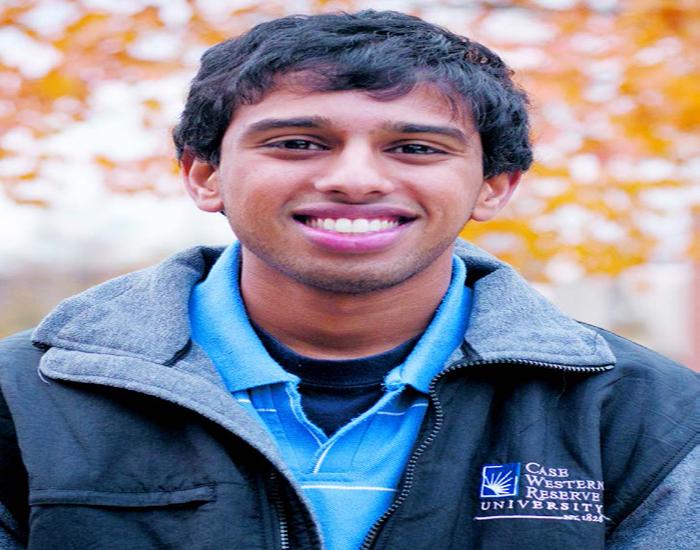 When The Observer spoke with Sai Kolluru just over a year ago, the Case Western Reserve University senior and former president of the student organization Hindu YUVA (Youth for Unity, Virtues, and Action) had just brought CWRU to the “international platform” in Washington, D.C. to promote religious tolerance on the national collegiate level.

“‘Tolerance’ is a negative connotation,” Kolluru said, recognizing the idea of tolerance for religious diversity as a misused and outdated term in the United States today. I recently had the chance to catch up with Sai and learn about how the powerful ideas he cultivated from his experience with the Interfaith Challenge and his internship under the Obama administration have made a contribution to interfaith relations at CWRU. We discussed his efforts to unite religious diversity through community service and his ultimate vision of morphing the idea of interfaith “tolerance” into interfaith “celebration.”

Jenna Millemaci: How does Hindu YUVA promote positive interfaith relations among the community at CWRU?

Sai Kolluru: There’s a self aspect and a selfless aspect of the group. The self aspect is developing one’s self through their cultures and their traditions, preserving one’s values and principles, and not just staying to one’s self and community, but expanding your sense of belongingness.

The way to do that is through service and dialogue. Service and dialogue are the kind of things we’re trying to do on campus… We lead through an interfaith collective group of volunteers. With that sort of mentality, we started Hindu YUVA.

You don’t want to put a boundary around you and say, ‘I am Hindu, and I am different from you, so therefore I will tolerate you.’ Instead if we could expand that sense of belongingness and engage ourselves in social activities through a faith-inspired motive, then we could invite everyone to join and do something that benefits the community through what our faith has taught us.

We had a day at Georgetown [participating in President Obama’s Interfaith Challenge] in which we talked about each of our traditions. [Since] Hinduism [is] small in America, there was really no one who was going to talk about Hinduism. So they called me up, and I gave a speech to over 300 faculty members and students who were being represented there, and talked about [the idea that] through the lens of a Jew, the lens of a Christian, or the lens of a Muslim, we could use what inspires us to move away from tolerance and approach each other through a celebration – celebrating life through each of our cultures.

JM: Who or what has been your inspiration for promoting unity in interfaith relations at CWRU?

SK: For me, it was just coming into [CWRU] and meeting so many different people. I was sort of searching for my identity. I was brought up pretty orthodox Hindu, [and] I really wanted to understand what Hinduism was all about. But at the same time, I really wanted to understand what other religious traditions were all about. Last Friday I visited a synagogue, attended prayer, and attended a lecture on social justice, [and] last semester I gave a speech at All Deliverances Ministries. My inspiration really comes from my faith.

While I was a White House intern last summer, I got to work on some of the organizational components of the conference, during which I made sure two representatives [from CWRU] were there. I believe [our university representatives] were [director of Civic Engagement and Learning] Betsy Banks and [director of the university’s Center for Community Partnerships] Latisha James.

That conference also pushed us to initiate the discussions on making the President’s challenge more active on our campus. I just happened to be at the White House as an intern for the summer after CWRU joined the President Obama’s Interfaith Challenge. Being in the middle of all of it, it was vital for me to inform our CWRU community and its leaders about the initiatives and in the effort, ensure that our representatives were in D.C. Fortunately enough, we had two people come to the conference and officially kicked-off our Interfaith Challenge on campus in the fall.

Dr. [Sree N.] Sreenath has been an inspiring person for me throughout the most important part of my life: my college career. He loves to talk to students and help with them with their problems. Even though I had an advisor for my academics, he became my advisor on life. He would spend hours taking time out of his busy schedule to talk to me and tell me about opportunities both in and outside of campus. He inspires me to push beyond my potential and makes me believe in myself.

I see the 21st century as an era when globalization is real and we’re always mixing with other people and doing business with other countries, but we don’t always understand where their values and business ideologies come from. So my inspiration is [also] humanity – to really help humanity walk toward a more understanding and more engaging expanding of ideas, and just to be more human. Our traditions are what make us human. But it’s just not our traditions, there’s also a bigger picture in mind.

JM: What have been your more recent contributions to interfaith relations at CWRU since you attended President Obama’s Interfaith Challenge conference?

SK: [Our] personal accomplishments would be really helping the Bhutanese community. There were 100 or 200 refugees that came in, and [our motive was] really helping them live a sustainable life. We did a lot of tutoring…culture and woman empowerment, and self-empowerment activities.

For us as a group I feel like it was really a great accomplishment, helping the community take off and making them self-sufficient. So that when the next 200 refugees come in and wherever they are in the country, they can hear the stories of Cleveland, how the refugees in Cleveland did well, and spread those stories among each other. They’re sort of on a journey to live the American dream, just as we are.

The second accomplishment was Hindu YUVA being a leader and promoting the President’s Interfaith and Community Service Campus Challenge on campus. We had several activities planned throughout the semester, [in which] people from the Church of the Covenant came, and professors joined us.

JM: What is the most important thing you have learned as a participant in the President’s Interfaith Challenge, completing your internship under the Obama Administration, and establishing Hindu YUVA?

SK: The most fruitful thing about this is your development as a person. The most important thing I’ve learned from all this is to have an open-minded, positive view of the world.

College is not about developing yourself, getting a degree, or being that engineer or that doctor, it’s more – it’s about making something of yourself so you can benefit the rest of humanity. [As President Obama said], coming to college just to make a buck or two when you graduate is a poverty of ambition. That is important for self sufficiency and self development, but at the same time having a selfless attitude toward the world is so essential, especially when our population is growing and there are so many problems. We need to expand our sense of belongingness.

Especially as Americans, if we are not going to stand for freedom of religion or freedom of speech, how are we going to be a leader and protect those who are being persecuted as well as really stand up for who we are? So having all of these opportunities – having the opportunity to go to college, having the opportunity to wear nice clothes – these are things we take for granted. But being aware of these things, we should really try to go beyond what we have and be that example for the rest of the world.

JM: How could you still see further change in interfaith relations on campus?

[I think] one of the biggest problems in today’s world is that when you’re at home from the ages of two or three to 18, you become so rooted in your tradition, and all you are taught in your family is that this is the tradition that is only right, this is a community you are only in, and this is it. Then you come to college, and if you start preaching that to the entire community, you are not going to be received well. So college should be where that dialogue should happen, and those questions should be asked.

I also believe that professors should be teaching their religion with sort of a broader mindset. They’re not just teaching about religion but also cultivating and sculpting the personality of a student to positively think and approach. That is where you have an acceptance about your culture, but at the same time you’re also teaching a balanced approach to the world. Knowing too much evil or too much good is not going to do much good to the world. Having a balance is what’s really going to help.

JM: What are your goals for shaping interfaith relations in the future, beyond CWRU?

SK: I would like to have several non-profit organizations that are centered on interfaith dialogue, mainly focused on service. Through these non-profits, [I would like to] try to expand and make people understand that a sense of belongingness is important, and cultivate or inspire a few people to be the best they can be in what they want to be…sort of promote a sense of what Ghandi or Martin Luther King Jr. promoted. If I could do 1 percent of what they did, I think I would be pretty content.

Coming to college and getting involved in interfaith wasn’t always certain; I plan on keeping my mind very broad. You can have all these plans, but at the end of your life, you could make these plans and then just not be happy about the end result. I want to be introspective about the future, and have that lead me to whatever I want to do.