A Local Company With a Global Reach 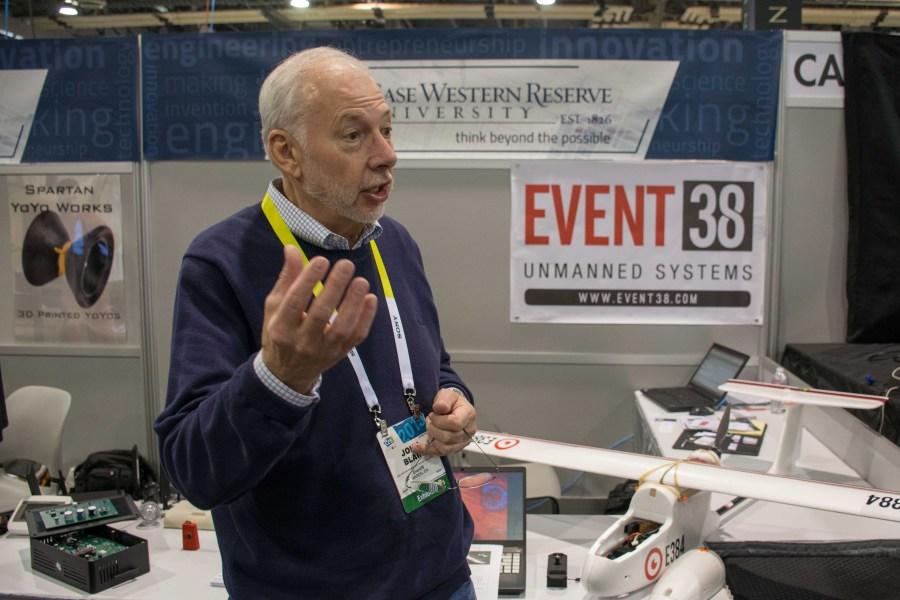 Event38 was eager to talk about its work with drones at CES.

Event38, founded by Case Western Reserve University alumnus Jeff Taylor, was at International CES this week to display the company’s drones. The company, created three years ago, is headquartered in Akron and has customers in 49 countries around the world. Although the company did not have a live demonstration at the show, they were more than eager to talk about their current and future endeavors.

Event38 currently manufactures two models of drones: a fixed wing model and a multi rotor model. The fixed wing from has a wingspan of six feet and is four feet long. Its battery can provide power for two hours of uninterrupted flight while carrying up to a two kilogram payload. The multi rotor drone can carry up to 500 grams. In order to improve the carrying capacities of these drones, the company is working on lighter cases for the cameras that they ship with the drones.

The company’s drones are mostly created for industrial purposes, with the main applications falling within agricultural uses. The drone can survey approximately 1000 acres in one flight with a two centimeter resolution, allowing farmers to see the detail on all of their plants. In addition to agriculture, the company also specializes in surveying, construction, environmental preservation, and research applications.

Because of Federal Aviation Administration regulations on drones, most of Event38’s customers are located outside of the United States. Some of these customers include surveyors in Uganda attempting to find the best location to build a dam and the government of Belize, who are using the drones to curb illegal fishing operations on their coasts. The company has additionally licensed its drones to a reseller in South Africa that is helping subsistence farmers get the most out of their yearly crop yield.

Going forward, Event38 is looking to use their drone technologies for big data applications within agriculture. Their large customer base gives them a massive amount of data to assess and determine correlations between factors that could influence plant growth in different areas of the world. The company has already begun to do research in this area in a collaboration with the Ohio State University where the drones were used in conjunction with researchers on the ground to form correlations between factors of growth.

Event38 hopes to revolutionize agriculture with the drones that it creates. Between helping smaller farms keep track of their crops and using big data to improve yields throughout the world, the company’s technology has had a positive effect throughout the industry. Even though the company has already achieved much, their aspirations remain as high as their drones can fly.