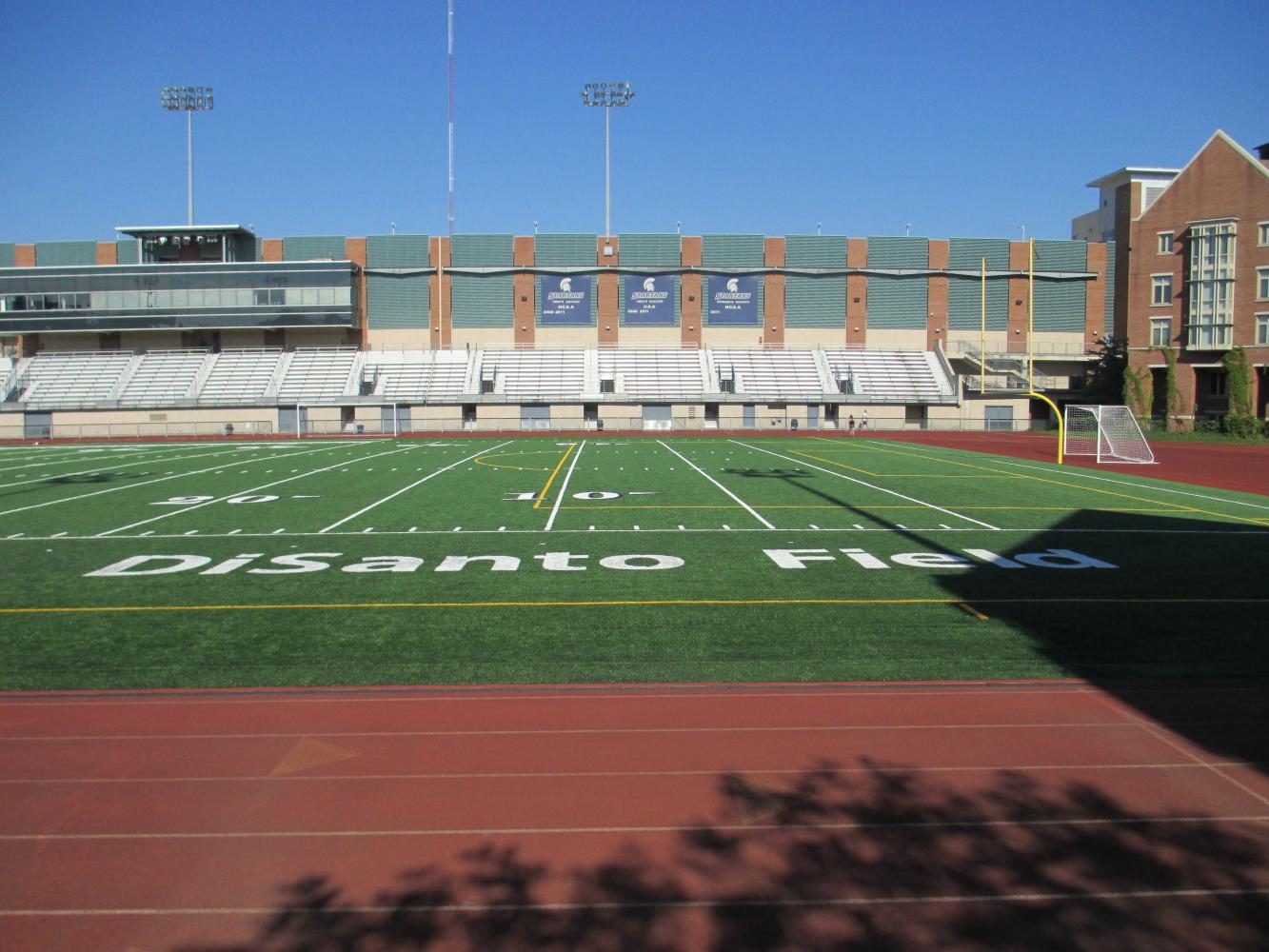 A variety of sports teams practice and play on DiSanto Field, including football, soccer and track and field.

Over the past few years, new buildings and renovations of current ones have dominated summer construction at Case Western Reserve University. Now, the fields get their turn.

CWRU replaced the 12-year old turf on DiSanto Field and is in the process of replacing the infields at both Mather Park and Nobby’s Ballpark. The nearly two-month long construction on DiSanto ended on July 10.

The newly installed turf is a product called Revolution 360 and was chosen in-part for being environmentally friendly. The turf will be filled with ethylene propylene diene monomer (EPDM) particles, an eco-friendly alternative to crumb rubber. It is made by FieldTurf, the company who produced the original field back in 2005.

“Turf products have a certain life span and it was time that we reviewed the opportunity to replace the turf in DiSanto Field,” said director of athletics, Amy Backus “…All along the way we involved the coaches, our facilities staff, as well as the staff from facilities and planning department from the university.”

The field is used by varsity football, soccer and track and field.

“While it was passing all safety tests, it had experienced the normal wear that comes with UV ray exposure and all the use from varsity athletic teams, club and intramural programs, and general recreation,” said women’s soccer Head Coach Tiffany Crooks.

Crooks spoke of how the field “played really fast,” unlike a grass field, due to broken blades.

Men’s soccer Head Coach Brandon Bianco discussed the inconsistent drainage of the old field. He pointed out that portions didn’t drain during heavy rain and that while the surface “generally held up well over the years” it was “really beginning to show its age.”

Discussion of a replacement had begun over the last few years and the process of selecting a new turf started over a year ago with various companies making pitches for their products to both staff and coaches. Construction on the field turned out to be less expensive than expected since a pad that goes under the turf wasn’t necessary with this product, allowing for the improvements of both Mather Park and Nobby’s Ballpark. 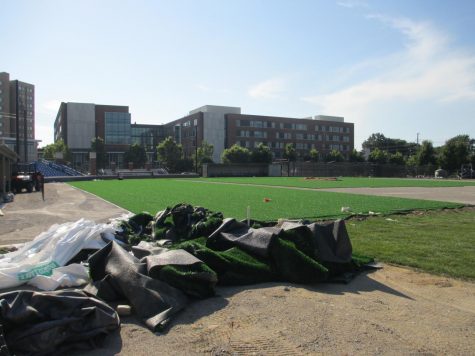 Construction on Nobby’s Ballpark is underway.

For Mather Park, home of the varsity softball team, the department chose Hilltopper Infield Mix, an artificial dirt, to replace the current dirt infield. Though the staff originally considered using artificial turf, the idea was ruled out after consulting with Head Coach Josie Henry and looking at other collegiate softball parks around the area.

Hilltopper is a polymer that is made to look and play like real dirt, but is easy to dry. With University Athletic Association play now occurring at the member schools instead of in Florida, weather becomes an issue, especially in March.

“It’s really critical that we get games in. We were looking, obviously, to create a situation for our fields, where pretty much we’re guaranteed to get the games in,” said Backus.

When water collects on the Hilltopper surface, it can be squeegeed off, similar to a tennis court. The hope is no games will be cancelled this season. Hilltopper will also be used in the new bullpens which will be located outside the field. The previous field contained pitching bullpens within foul territory, an unusual safety hazard for both pitchers and fielders. The new bullpens prevent accidents and make the park more typical for softball.

Nobby’s Ballpark will also be getting an artificial infield, however artificial turf will also be involved. AstroTurf will be used to replace the infield grass. The model selected, Diamond 3Di, contains a feature that prevents the infill from flying into a fielder’s face, which according to Backus, is “one of the reasons we chose AstroTurf.”

Artificial dirt will replace the dirt that used to be on the field. Also made by AstroTurf, the material will cause the ball to react in the same as real dirt.