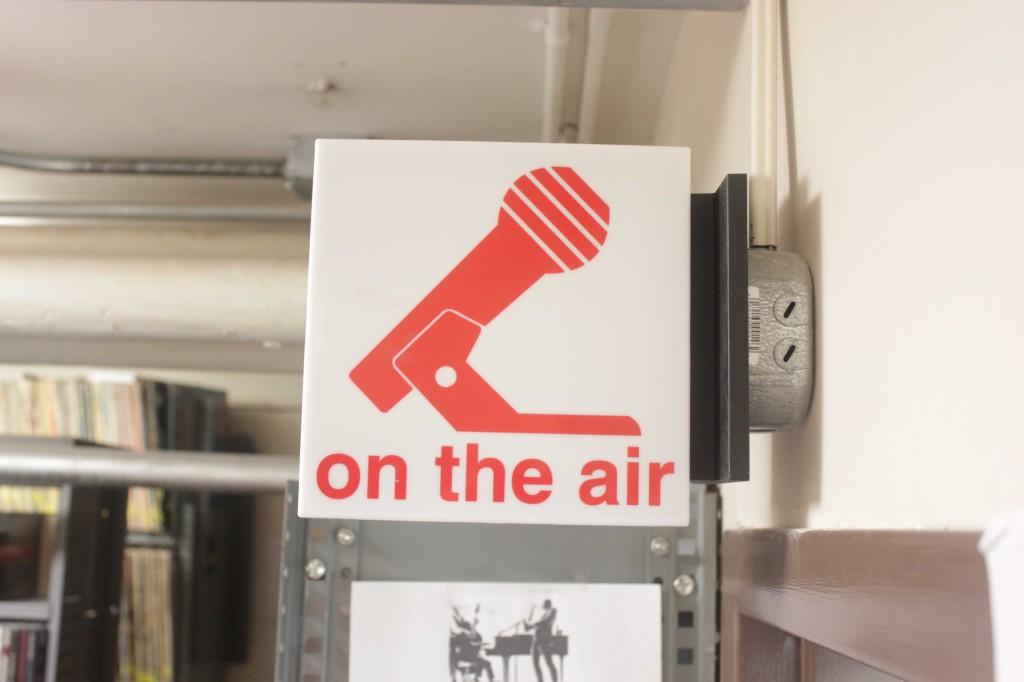 I stood outside the Mather Memorial Building, hoping that someone inside heard me ring the doorbell. It was cold, and I usually was not walking around campus at nine in the morning.

Thankfully, someone came to my rescue and I rushed through the open doors of the campus radio station.

Once inside, I could not help but marvel at countless stickers and graffiti-style decorations coating the walls. I was fairly new to the building, having been inside only twice, but it already reeked of nostalgia.

Studio C was hectic as the early morning show “Breakfast Toast” wrapped up and programmer Brian Tietz prepared for his show, “Swing-a-Verse.” Before I knew it, Tietz was speaking into a microphone, live on the air, announcing the first song “Taffy,” by Johnny Hodges and Wild Bill Davis.

According to Tietz, his show “is pretty free-form. I don’t plan it out. It’s sort of the music I like and am in the mood for.” “Taffy” was a smooth song, with a laid-back feel. It certainly set the stage for a jazzy and lazy show that is perfect for any morning listener.

Tietz, a graduate student at Case Western Reserve University, has been involved with WRUW since his junior year in 2008. However, his interest sparked much earlier than that.

Beginning his freshman year, Tietz has actively participated in CWRU’s Swing Dancing club. He and a friend decided they wanted to share their love of swing music through a unique show on WRUW. “We wanted to put over the radio what we liked to dance to,” said Tietz. Thus, “Swing-a-Verse” was born.

The show has a surprising variety to it, with upbeat jazz tunes mixed with slow bluesy songs. Among my favorite songs featured in this past Tuesday’s show are “The Oom is Blues” by Quincy Jones, “Meditation” by Eddie ‘Lockjaw’ Davis, and “A Smooth One” by Georgie Auld.

All playlists from all past shows, not just “Swing-a-Verse,” are available online at the radio station’s website, but the songs do not repeat as much as more popular stations. Our campus radio station hosts a stunning collection of over 100,000 CD’s and over 100,000 albums and 45s. “If it exists, it’s probably down here in some form or another,” claims Tietz.

Most of the music used in the show is now digitized and more easily accessed through a computerized database. However, I did watch Tietz put a song on air from an old, scratchy record. This authenticity made his show even more interesting.

Though many people are not into jazz, or consider it old and outdated, “Swing-a-Verse” includes tunes from all ages. Most jazz and blues music was conceived in the 1930s and 40s, but Tietz “will still play anyone who’s done it since.”

WRUW, like dancing, is just another of Tietz’s hobbies. It may just be a hobby to him, but his effortless skill shines through his smooth show with flawless voice presence and unique selections.

“Swing-a-Verse” brings something new to the radio table, even though not all the music is currently popular. Tietz shared, “For some people, it’s a fresh, new thing.”