A new and improved “Uncle Vanya” 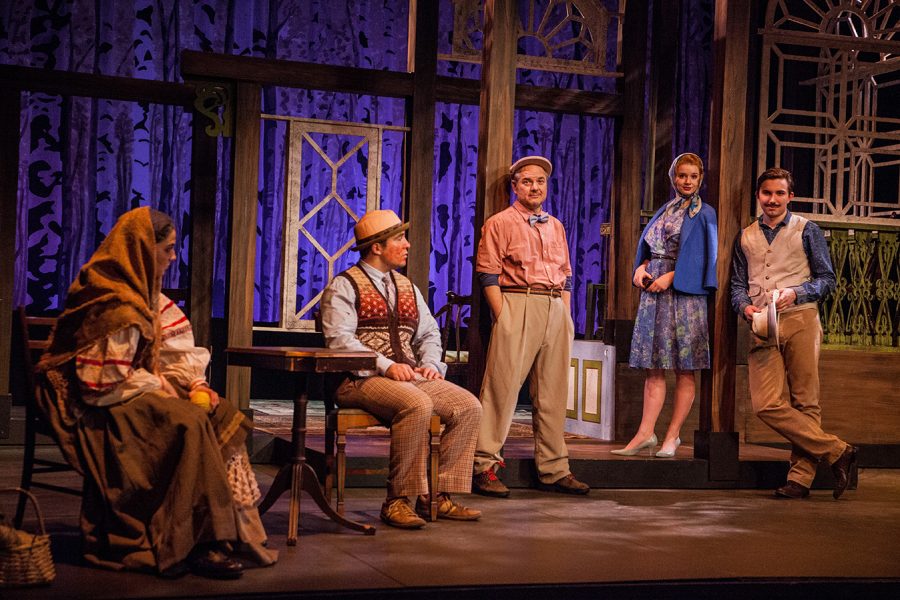 The CWRU Department of Theater's production of "Uncle Vanya" ran at the Eldred Theater for two weekends in February.

One country house. A new, attractive wife. Boredom. Tea in the sunlight. Unrequited love. Unexpected humor. A gunfight where not a single person is hurt. What could be more interesting?

As the third theatrical production of the Eldred Theater’s 2017-18 season, the Case Western Reserve University Department of Theater performed “Uncle Vanya.” The department put on six performances between Feb. 16 and Feb. 25. The play tells the tale of a professor and his young second wife visiting their rural home where everyone is overtaken by arduous day-to-day living.

Anton Chekhov’s original work titled “Uncle Vanya” was based off of his own earlier work, “The Wood Demon,” and has the infamous reputation of being quite dry. This is a trend with much of Chekhov’s work, including “Platonov,” “The Swan Song” and “Ivanov” with a sort of forced, awkward humor.

The titular character, Vanya, was played by assistant professor David Vegh due to an artistic decision to have an older character play the part, and to involve a professional actor.

Director and CWRU Professor Christopher Bohan took a number of specific artistic choices in his interpretation of the play to liven the dialogue outside of the more traditional and stale productions of “Uncle Vanya” and to incorporate a greater degree of action and movement.

To move the play away from the script, Bohan focused on physicality and dynamic stage composition where “rehearsal was an exercise in incorporating the movement of the stage with the movement of the dialogue.” From this came the idea of a rotating set, which turned to different locations in the story, to portray real physical labor.

According to Bohan, the original driving seed for this interpretation of “Uncle Vanya” was “regret,” later transitioning to the idea of “usefulness.”

As many of the regrets in this play center around the sister of the title character, Vanya’s sister, Vera (Harper Case), Bohan made the untraditional decision to include ghosts in representation of these characters that had passed away.

Despite having no dialogue, Vera’s character in this production gave Vegh the opportunity to interact with somebody on stage.

“It was great for me to have an actual actor to interact with on stage, as opposed to simply having to imagine a character that I’m continually referencing but the audience never actually has an opportunity to visually connect with,” he said.

With Bohan’s physical and movement-oriented approach to the script, the actors experienced a large amount of creative freedom in creating their characters.

“I think Marina served to progress everyone along in their journey with the sadness and regret they held within them,” said Sara Young, who played Marina. “She is unshakeable… and my goal with Marina was to be what people needed in order to move on.”

With this, Sara took inspiration from her life, and incorporated the natural unscripted moments that stemmed from understanding the character to an integral level. Working through rehearsals, she found the strong and “tree-trunked” identity of Marina, and continued learning this character’s movements. In this, Marina often reacted grunts, laughs and yawns as just truthful reactions to the events in the scenes.

Additionally, specific technical decisions pushed by the lighting designer, Mo Patterson, and the costumer designer, Caitlin Cisek, helped contribute to the scenic elements. The costumes, rather than being period-specific, were meant personalized to each character and differentiated between different ages and states of wealth.

The lighting helped ingrain a “sense of mysticism” into the production; greens alongside deep reds and blues conveyed the intensity in emotions. To further add to the mood of different scenes, the sound featured more modern music including Bon Iver and The Budos Band.

With such specific choices, it is evident that the central ideas were conveyed through the interpretation of the script, movement, set construction, lighting, sound, character development and costumes. As one student firmly stated, the production’s “technical mastery and amazing directing melded together into a Chekhov show unlike any you’ve ever seen.”