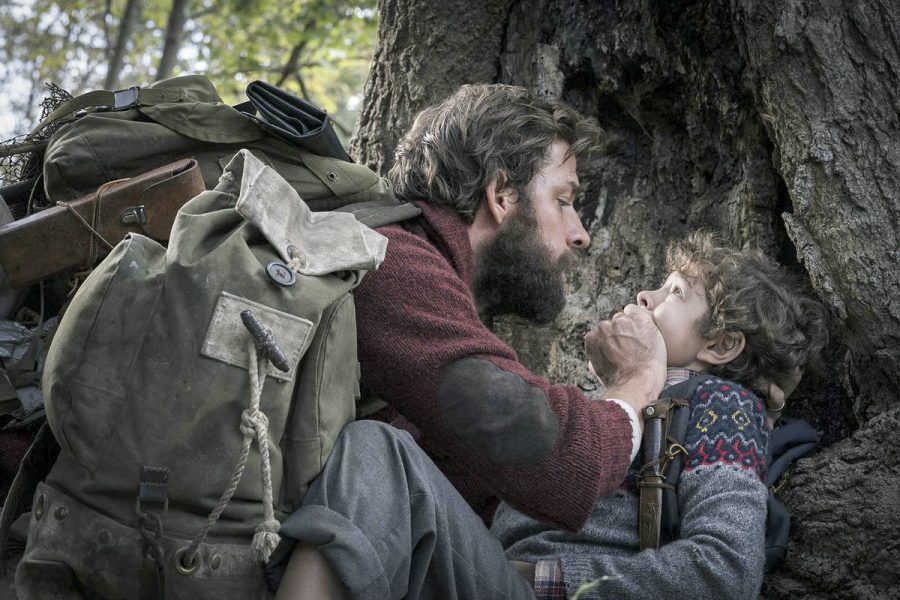 Since its release on April 6, “A Quiet Place” has been shocking and engrossing audiences. It is a passion project for John Krasinski, the director, co-writer and star of the film along with his wife, Emily Blunt.

The film takes place in a post-apocalyptic near future, where most of the human population has been wiped out by deadly, blind creatures with hypersensitive hearing. Isolated from civilization and faced with the possibility of being hunted at any moment, the Abbott family attempts to survive and remain a loving, functioning family, while trying to be silent.

“A Quiet Place” is a movie built on and driven by pure tension. Krasinski proves himself as a director by using filmic language and paying careful attention to detail, bringing the writing of the screenplay (by Bryan Woods and Scott Beck, along with Krasinski) to life. Since the story requires characters to remain silent, much of the dialogue is non-verbal. Visual storytelling techniques are used to show how the characters go about their days, both in regular and dire circumstances, without making noise.

We see early on in the story just how dangerous the monsters are, and they leave an impression that even the slightest misstep can result in death. This impending doom and the extreme juxtaposition of silence and sound creates an atmosphere of dread from beginning to end, which enhances the viewing experience.

Every sound this film makes is chilling to the bone. Objects falling, animals yelling and even footsteps become liabilities for our protagonists, and we are forced to watch them carefully navigate around obstacle after obstacle. Most of the scares are clever and positively real (though there are a handful of false ones, albeit not too offensive), bringing out the heart pounding suspense of moments where life and love are on the line.

This brings me, once again, to the writing, and the acting. The dialogue of this film always sounds natural to the ear, giving the story a good flow which contributes to its superb pacing. The characters come across as genuine, and, unlike many other horror films, the majority of their decisions seem logical and realistic. Not all of their actions make perfect sense, but the characters are treated as intelligent, as well as respectable, and therefore so is the audience.

The cast of the film is small, mainly featuring Lee and Evelyn (Krasinski and Blunt) and their two children played by the very talented Millicent Simmonds and Noah Jupe. The performers have excellent chemistry, and are masters of capturing not only the primal emotion of fear, but the subtle nuances found in melancholy, nostalgia, joy and love. What’s even more impressive is that they accomplish this mostly without the spoken word (body language and facial expressions are key here), and the performers make it look easy.

Furthermore, it’s clear from scene one that Krasinski knows what he wants from himself as an actor. He has a superb understanding of the way this dialogue can be effectively delivered and always seems in control. His delivery is both heart wrenching and poignant, and he steps into the role of a caring, protective father figure naturally. Off and on camera, he is one of the highlights of this movie.

No film is perfect, but for what it is, “A Quiet Place” is darn well close to being as good as it can get. It’s a spine-tingling thriller with a real heart lying in its narrative and fantastic performances. There’s a reason this film is getting so much attention lately, and in my opinion, it deserves its praise. It’ll keep you on the edge of your seat, from fade in to fade out.