A space for students 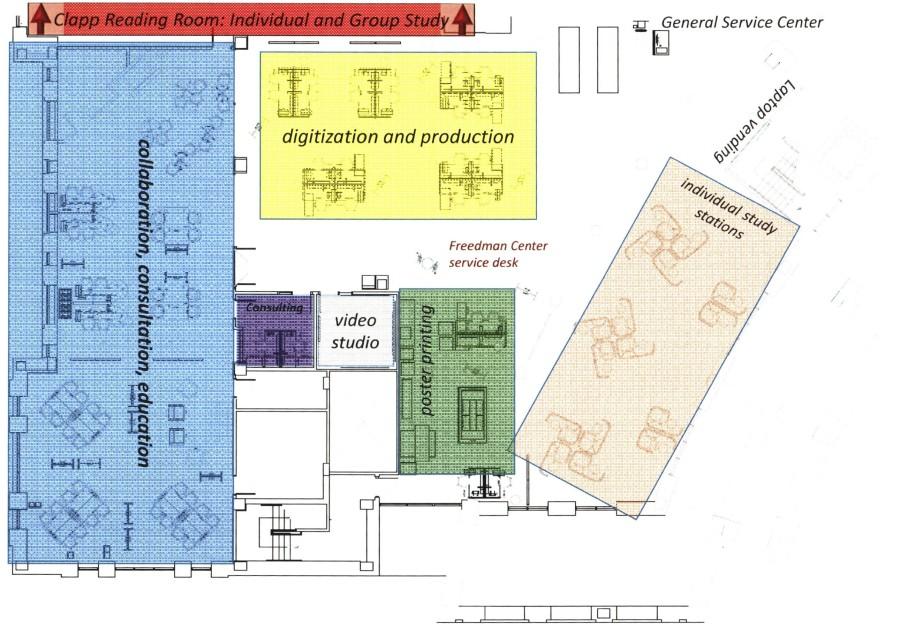 Many resources currently housed in the glass-enclosed Freedman Center will be moved out onto the open floor.

The Kelvin Smith Library is currently undergoing a massive overhaul of its spaces. To keep plans in line with student needs, last year KSL announced a student redesign contest, opening up the first floor and beyond to suggestion from student teams.

Now, the winners have been announced and changes are underway.

Out of sixteen letters of intent for the Student Redesign Competition 2.0, three teams made proposals before a panel of library administrators, an interior designer, and representatives from several Case Western Reserve University departments. The first place team was awarded $2000, the second place team $1000 and the third place team $500.

The first-place prize went to sophomore Marc Bouchet, senior Alexis Schilf, and junior Connor Swingle. For their proposal, they surveyed 119 students about how they would like to use the library and took a timelapse video of Cramelot café to see how students use the space.

They suggested that the library make clearer, more intentionally designated spaces for different library functions, use some existing furniture in different ways, and make more spaces for collaboration.

According to the team’s survey, most students work in groups at least once a week and would like more collaboration spaces. Students also reported that they want access to whiteboards for group work, and most students prefer ergonomic chairs to casual or leisure seating.

Arnold Hirshon, associate provost and university librarian, confirmed that the library is considering extended hours, at least for coffee if not for the full menu, as has been done during finals and midterms in the past. Library staff is also working to implement more types of seating, though the proposed glass wall is not currently planned.

Another change being made as a result of this proposal is the addition of taller, café-height tables near the windows in the cafe, and more will be interspersed through the building for students who want the option of working while standing up.

Sai Somasundaram and Chang Yoon Doh, sophomores, made up the second place team. Like the winning team, they also suggested more collaborative group rooms. In addition, they suggested a dedicated area on the second floor for student inquiries and higher quality video equipment and an online reservation system for equipment and rooms.

The planned changes to the Freedman Center will incorporate more group work spaces, and the library staff is looking into software for an online reservation system. A basic reservation system would cost around $5,000 to $10,000, and a more advanced system linked with card-swipe doors to rooms could run much more, as well as involve renovations on top of the program itself.

The third place team, master’s student Nicholas Barron and senior Tom Dietrick, suggested an online library calendar including events and available spaces, improved signage, and some changes to the second floor study space including removing an old copier against one of the walls. The library staff is looking into ways to make the signs clearer and more helpful, and they have already removed the copier.

This contest took place at the same time as extensive changes to the Freedman Center were under way.

Inside the glass, where much of the Freedman Center’s resources are currently located, there will be consultation spaces with large screen monitors, demonstration stations for how to do things like digitization, and the video studio. The KSL Writing Center location, currently in the glass room, will be moving down one level to a reserved table on the library’s lower level.

Outside of the glass, there will be scanning equipment, the 3D printer, poster printers, and an area where staff can work with students to prepare posters for printing.

”The whole idea is that we want to draw people in and have people use the stuff,” said Hirshon. “One of the problems we’ve had with the glass room is that people kind of stop at the door and think that they can’t go in, and we don’t want that anymore.”

Driven by a combination of ideas from the redesign contest and changes in the space as a result of the alterations to the Freedman Center, the first floor will be changing considerably.

“Though technically this is a Freedman Center redesign, it drove a lot of other changes around the rest of the first floor, and those changes driving changes on the second and third floor,” said Hirshon.

The floor will be much more clearly zoned. The right side of the first floor, with Cramelot, books from the Cleveland Public Library, and the art gallery, will be a more relaxing, social area. On the other side of the staircase and open lobby, there will be a combination of old furniture and new. That will include glass whiteboards on rollers that can be grouped together to make more whiteboard area.

In addition, the library is ordering semi-enclosed work stations, not available on the market yet, to provide students a more focused study option. The stations will have walls about four feet high around a chair, a small desk, a laptop arm, and a footstool. All of the stations will also have power outlets.

Some library changes will also be making their way up the winding central staircase. One of these changes is that some computers from the first floor are being moved to the second and third.

“We’ve never had anything on the third floor,” said Hirshon. “If you go up to the third floor right now, you’ll see some chairs up there, right when you get off the elevator and the staircase, in that enclosed area. That space has been underutilized. [The relocated computers] will create a lot more use of that space while still keeping that floor as a quiet floor.”

Some tables from the first floor will also be moved to the third, and the door closure on the quiet reading room will be replaced with a less noisy alternative.

Many of these planned changes are already underway, and more will be completed as the year goes on, though the library staff will be mindful of student needs when they close off parts of the library to renovate or add furniture.

“We’re always mindful of the time of year when we do any type of construction throughout the building, so we always try to time it so it’s nowhere near midterms and finals,” said Gina Midlik, planning, budgets, & assessment team leader for KSL.

When they close an area, library staff will also post signage in advance and make alternative rooms and spaces available.

In addition to the changes being made now and planned for the coming months, the library will also be holding another contest, this one to decorate the large pillars on the first floor of the library.

Students are encouraged to submit photos, art, or other ideas to bring some visual interest to the white pillars. The competition is open to individuals and teams from CWRU and the Cleveland Institute of Art.

Students in the space

As these changes are made to the library, student use of the space is steadily increasing.

According to Hirshon, this has not always been the case. As recently as five years ago, the library was an underused resource, he remembered.

KSL decided to stay open over Labor Day weekend, and Midlik noted that even over the holiday weekend it remained full of students working and relaxing.

Midlik said, “The holiday doesn’t seem to be an isolated incident—there seems to be an overall increase in students using KSL throughout the day since the beginning of the semester.”