A tale of two matches 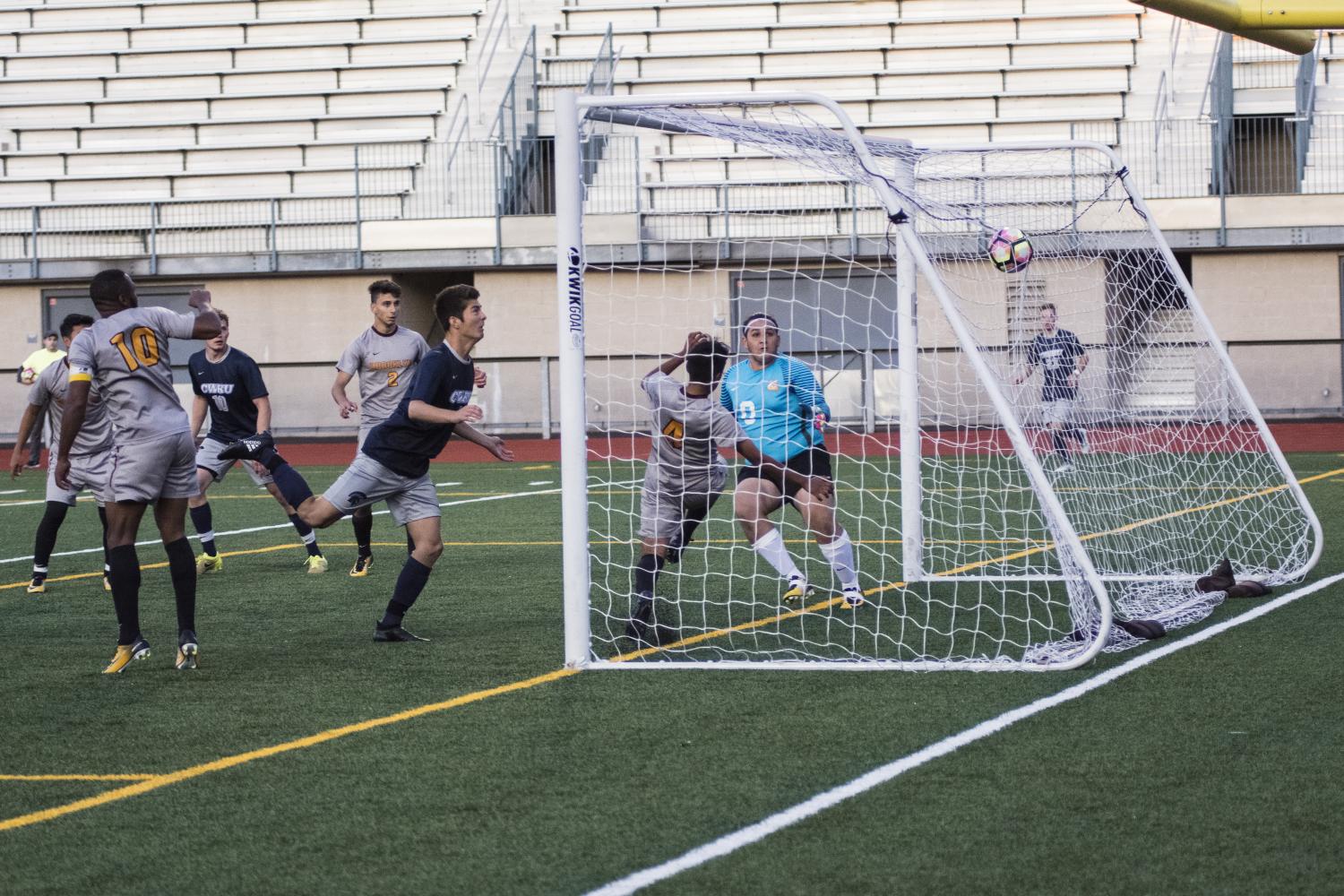 Nicholas Bertrand heads in the first of 10 goals for the Spartans in their win over Brooklyn.

Case Western Reserve University’s men’s soccer team scored 10 goals this weekend, but still walked away with its first loss of the season. The Spartans played two games at home, each with very different results. The team’s defensive prowess remained on full display in the first 45 minutes of competition, and their offense exploded for the last 90 minutes.

To start the weekend’s contests, CWRU hosted the No. 2 Calvin College Knights. Throughout the entire first half, neither team was able to score. However, the Spartans led the offensive battle with a 7-4 edge in shots against the Knights. While Calvin College was seen as the favorite to win, the first half had spectators wondering if the home team would be able to pull off the upset. Then the second half began.

Fourth-year goalkeeper Calvin Boyle had survived nearly 250 minutes of gameplay in the season without allowing a single shot to get past him. But, against a school with his same name, Boyle was finally outdone. Under five minutes into the second half, the Knights scored their first of three goals on DiSanto Field. The crowd that had hoped for the Spartans to claim victory instantly lost much of its former hope, but the bleachers were still tense with anticipation.

CWRU would go on to have six shots throughout the second half, but none were able to get to their destination. Meanwhile, their opponents kicked their way to a 3-0 win, reflective of their overall season record of 3-0-0. The loss put the Spartans back to 1-1-1 on the season.

“From our loss to Calvin,” says second-year midfielder Zachary Senft, “we’ve really focused on being sharper in key moments because that was the difference between us winning and them. … This is something we need to and will improve on moving forward.”

Following the difficult loss, the Spartans took their home field again the following evening to defend against the Brooklyn College Bulldogs. Much like their first game of the season, the Spartans scored early. In the third minute, second-year defender Nicholas Bertrand connected on a shot, putting the home team up 1-0 against the Bulldogs. Throughout the half, the Spartans would score four more goals, including another by Senft.

Up 5-0 at halftime, CWRU looked poised to make a statement about their home field after the loss to Calvin College the night prior. By the end of the game, the Spartans had scored ten goals, and the Bulldogs had only managed to have eight shots in total, with none of them turning into goals. After allowing three goals to get past him against the Knights, Boyle redeemed himself by making three saves against Brooklyn College. The game was a poetic reversal of fortunes, and it showed the resilience of the CWRU men’s soccer team.

The weekend moved the team’s record to 2-1-1 on the season, and finished the first half of a four-game home stand. The Spartans lost to No. 7 John Carroll University on Wednesday, Sept. 13, and will complete their home stand by taking on Marietta College on Saturday, Sept. 16.