A tale of two talents 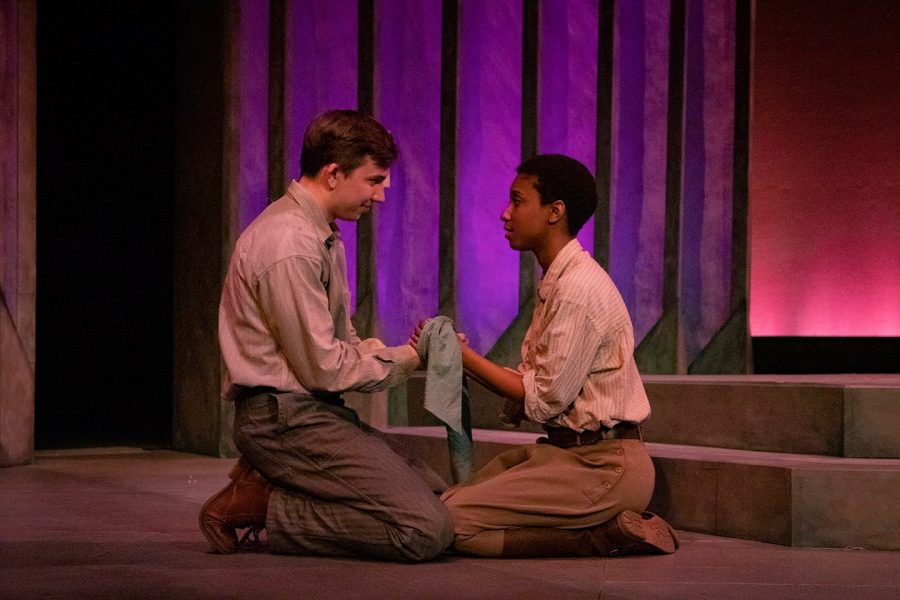 Graduating fourth-year student Matt Thompson not only excels in pre-medicine, but he also shines on the theater stage. Thompson is a double-major in biochemistry and theater. He has been involved in performing arts since age four.

Inspired by his older brother’s violin abilities, he took up the instrument himself. This musical ability marked his first exposure to the performing arts world and became a hobby he continues to this day.

More poignant than his fond early memories of his brother’s violin sonatas is his recollection of a theater production on the Great Lakes Theater stage in downtown Cleveland. A unique rendition of “A Midsummer Night’s Dream” encouraged Thompson to pursue theater performance himself.

“It got me really excited. We had a pretty good theater program at my high school, so I auditioned and started doing plays and musicals my freshman year.”

Thompson was thrown head first into the musical ”Godspell.” He was on stage the entire show and loved it. After taking notes from directors and older performers throughout high school, Thompson jumped at the opportunity to craft his own student-led production of David Auburn’s Pulitzer Prize-winning show, “Proof,” with a close friend and talented actress.

The two had previously read the script in their Advanced Placement Literature course. Several summer rehearsals later, they debuted “Proof” to welcome students back to campus during their senior year.

“No one else had ever done that at our school before, so we were super excited about it,” said Thompson.  It was cool to take all the stuff that we learned from four years of acting, and do it ourselves.”

Thompson knew he wanted to continue acting in college, but knew his end goal was something different entirely: becoming a physician.

“I came in [to Case Western Reserve University] knowing I wanted to become a better actor and be involved in theater as much as I could be. But, I knew that pre-medicine was the top priority.”

Although it is difficult to balance at times, Thompson felt inspired to pursue a theater degree alongside pre-medicine. He spent his Spring 2017 semester abroad in London, at the Royal Academy of Dramatic Arts. Thompson made dramatic strides as an actor and returned excited to continue his endeavours as a performing artist.

“Of course it’s work,” said Thompson, “but it’s work worth doing, because it’s something that [I] love to do.”

The unique blend of arts and sciences turned out to be incredibly beneficial for Thompson’s future career as a physician. Performing arts and medical practice tend to require a similar skillset.

“Good acting isn’t just about your emotional projection, “ said Thompson. “ It’s about listening and responding genuinely to your scene partner. The more in tune with your scene partner you can be, the better your scene will be. I think in terms of a doctor-patient relationship, it’s much the same.”

It won’t be long before he’ll have the chance to apply those skills. Thompson closed his CWRU theater career last weekend, starring as Orlando de Boys in “As You Like It,” and will be graduating from the university next month. Next stop: medical school.

“My first show at Eldred was “A Midsummer Night’s Dream.” So, to close out with another Shakespeare comedy and to get married to [fourth-year student] Nailah Matthews again, this time as Orlando and Rosalind, and previously as Lysander and Hermia, was ironically full circle. It was a lot of fun.”

Thompson is incredibly grateful for the mentoring he’s received, the amazing people he’s met and the growth he’s had as a performer throughout his time at CWRU and throughout life.

“The constant goal as an artist is to do better, and to make the people around you better in any way that you can,” said Thompson. “You bring them up with you.”

In the arts and sciences alike, Thompson believes the true reward is growth.

“The challenge is always to come on stage the next time a better actor than you left the last time.”

Whether that stage is the theater or the exam room, Matt Thompson will surely continue to better himself and those around him.