A trip into the Cult of the Monster Truck 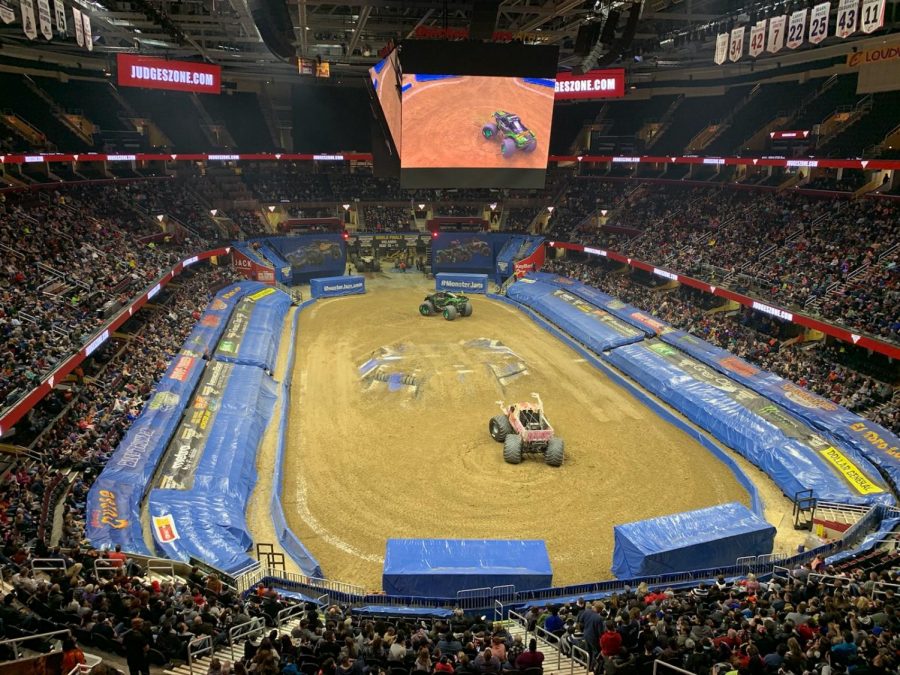 Monster trucks, louder than expected, drive at the Quicken Loans Arena as part of Monster Jam.

The first thing I learned about monster trucks is that they are loud. They are the kind of loud that rips through your ear drums and leaves you temporarily deaf. They make you want to cover your ears and shut your eyes like a child because these monster trucks were so loud that frankly, they sort of scared me.

The best way to protect my ears from the thunderous roar of the trucks’ oversized engines was to spend money. When Monster Jam, the world-renowned touring monster truck revue, stopped by Quicken Loans Arena, people were selling bulky noise-cancelling headphones at the merchandise table for $20. They were the kind worn by people who wave around orange sticks to guide planes on airport runways. The special edition headphones that were shaped like tires and could light up cost $35.

Walking through the metal detectors to enter the arena, I noticed several attendees already had their own ear plugs dug deep in ear canals. They were the superfans, those who understood that each impossible jump from these trucks, each life-threatening stunt, came with a deafening rumble. Seeing these massive trucks defy the laws of gravity and every expectation of safety made the momentary deafness worth it. I was knee deep in the Cult of the Monster Truck.

As I wandered around the winding hallways of the arena before the show began, I deeply considered buying a pair of headphones. At the merchandise tables, these headphones and the relief they promised were stacked invitingly next to gaudy t-shirts emblazoned with illustrations of the individual trucks and their invented personalities. In an arena that has hosted a number of music’s greatest stars as they stopped in Cleveland, a cabal of comically oversized cars were the rock stars of the night.

I decided to spend my money on a plastic platter of arena nachos and a Diet Coke instead.

The second thing I learned is that there is a God among monster trucks, and its name is Grave Digger. Fan favorites were not determined based on who displayed the greatest technical skill and agility in maneuvering these massive vehicles. Monster Jam’s biggest stars were decided simply by whoever was the most willing to die that night.

Grave Digger, a green truck stylized with purple accents and skull imagery, had flipped over every time it rolled onto the dirt track. Sometimes a ball of fire would erupt from its overturned underbelly. Sometimes the front of the car would fall off entirely. But, without fail, Grave Digger’s driver would emerge from the wreckage, turn to the audience and flash a grin and a thumbs up. The crowd ate it up every single time.

During an intermission between the introduction and a section where the trucks competed to see who could do the best donuts, a commercial played on the jumbotrons advertising officially licensed Monster Jam toys. Over the country music blaring through the arena’s speakers, a shriek of delight exploded all around me. Aside from the parents, a good number of whom were already fast asleep, I was the oldest person in my section of the audience. Nobody there was old enough to drive. Hardly anyone here was even born in this century.

The last thing I learned is that the monster truck industry might have a gender problem. After the intermission, it was time for the one-on-one races. These looked mostly staged. Oftentimes, one truck would speed off immediately with the other remaining stationary for a good 10 seconds.

Soldier Fortune—a truck wrapped in camo pattern, one of only two that night driven by a woman, and an undeniable monster truck star—was set to face off against a truck named Blue Thunder. The two trucks were toe-to-toe for most of the race, but at the last bend, Soldier Fortune bumped Blue Thunder, causing it to tip over. The crowd cheered as Soldier Fortune crossed the finish line, and a team of people came out to push Blue Thunder upright again.

Then, a bombshell announcement rocked the arena: Soldier Fortune had been disqualified. Apparently, knocking another truck over during a one-on-one race was not allowed. It was the second time she had been robbed of a win that night at the hands of a male driver, the first time was during the donut competition.

Blue Thunder’s driver stepped out of the car to overwhelming boos. He wanted the audience to know that he didn’t care if we didn’t like him, and that our derision was just going to motivate him to keep winning. I was inexplicably irritated by his smugness, and wished Monster Jam would have allowed Soldier Fortune to emerge victorious.

“Sexist!” I heard someone behind me yell to no one in particular. Was this the hill Monster Jam was willing to die on?

Blue Thunder had won the tournament, and there was nothing we could do about it. The remaining trucks were now driving out one by one for the freestyle competition. The earlier outrage over Monster Jam’s gender disparity could not have not have disappeared any faster. The world of monster trucks may very well have a gender problem, but it was not going to be solved tonight.

The freestyle section was a last chance for each of the trucks to impress with their most show-stopping tricks. This is exactly what the audience wanted to see, and it was certainly more important than advocating for substantial female representation in the monster truck industry.

Still, the appeal of this monster truck spectacle was not lost on me. These were mechanical gladiators going toe-to-toe in the modern-day Colosseum. These were Hot Wheels played with and tossed around carelessly by the gods. Monster Jam was a WWE Smackdown with deliciously high stakes.

Grave Digger was announced as the overall winner of the night after a freestyle run in which the driver managed to get the truck air bound, land on the back two tires and bounce several times. Soldier Fortune was second. Grave Digger’s driver stepped out of the car to the deafening cheers of the crowd, rousing most of the parents awake. An announcer hustled a microphone over to him. He thanked the audience for coming and made one last request: He wanted everyone to cheer one last time, as loud as they possibly could.

For the first time that night, I could no longer hear the hum of the monster truck’s engine.