A vintage feel, no trouble here 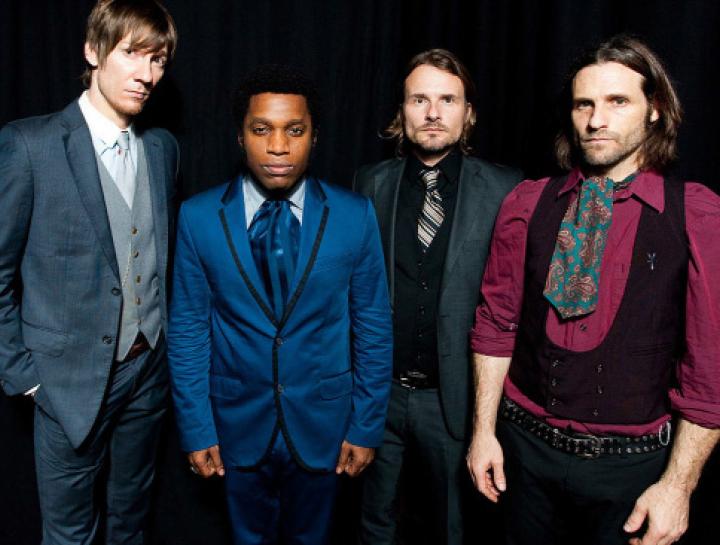 “Thank you for participating,” yelled sweaty singer Ty Tylers, a smile half-concealed by his microphone.

Audience members yelled back, thrusting their hands (most of which held beer cans) into the thick concert air. All those uprised fists and alcohol were the ultimate thumbs up to the music, signalling that the band did what it was supposed to do.

Vintage Trouble rushed into “Blues Hand Me Down” and walked off the stage for what could have been the end of the show.

Instantly, the crowd erupted with applause. Some were dancing to the song that had just ended. Some were discussing the show with complete strangers. Some were fist-pumping the air, still running off of adrenaline from the preceding hour. But none of them were ready to leave.

The members of Vintage Trouble filed back onto the stage as quickly as they had left it, taking on two more songs before ending the exciting night.

It was easy to forget the opening act’s issues after experiencing Vintage Trouble’s comfortable stage presence. When I arrived at the Grog Shop, DJ Charles McGaw had his equipment set up in the middle of the stage and seemed good to go. Usually bar concerts will start anywhere from 20 to 30 minutes after their scheduled starting time, so as McGaw fiddled with his equipment and downed a couple of drinks, I had no worries.

The next half hour passed, and I thought maybe he would start playing. But no dice.

Music was playing in the background, but it just seemed like a playlist. I’m fairly certain he was not performing, maybe because some technical difficulties got in his way, and the Grog Shop put together some music in the meantime.

Ninety minutes passed before there was any news of a performance, and it never seemed to bother the beer-clinking crowd.

Personally, I was starting to get antsy, so to kill time, I walked around the Grog Shop to get an idea of what Vintage Trouble’s fans, appropriately dubbed “Troublemakers,” were like. While I stood in a back hall to take note of the sticker-plastered walls, a 30-something chick approached me and asked where the bathroom was, telling me, “I gotta put these on!” while proudly displaying a bunched-up pair of Vintage Trouble panties in her left hand.

Though the Grog Shop is a smaller venue, it was packed for the show. People were lucky if they found seats while they waited, especially if it was by the bar.

I waited near the back of the venue, but knew when the band had taken the stage by the crowd’s response. Four well-dressed men decked out in 50’s style wardrobe prepared to play, and their assortment of neckties, hats and drab suits amazingly brought a new feel to the Grog Shop; a vintage feel.

The audience lost its mind as they pushed off the show with “Pelvis Pusher.” Tyler engaged the crowd with his off-the-wall dancing, and as he spun around on the stage with more confidence than I could ever muster, it felt like he was dancing with each and every one of us. Soon, everyone sang right along with the repetitive phrase, “One, two, three, push your pelvis with me.”

Tyler chatted with the crowd, telling stories about the band’s rise to fame, the need for love in a cruel world, the story of his parents meeting and even a few humorous anecdotes about accidentally mixing up the words “Cleveland” and “Columbus” at a venue days before.

Instead of just standing there singing, Tyler whipped the microphone stand into the air several times, flinging it above his head while he screeched out the highest of notes. His knack for ridiculous dancing had him jumping up and down, spinning in circles, and waving his hands high in the air.
It was a Renaissance of 50’s fast dance. Later, he walked through the crowd with his microphone and jumped up on top of the bar to get through the last song of the night.

At one point, he had the entire audience lower themselves down to the floor, and I felt like a college student in that scene from Animal House where everyone dances to “Shout” by Otis Day and The Knights…

…except for the fact that my friend and I were the only two college students there; the rest of the audience were mostly well past their thirties, some well past retirement too.

Regardless of age, everyone was moving to the music. There was plenty of fun dancing, and also a few chances to slow dance.

Each member of Vintage Trouble put all their emotions into performing their songs. Guitarist Nalle Colt squeezed his eyes shut and clenched his teeth, pulling physical expressions out of his long guitar solos. His playing was modest, unlike a lot of modern anthem solos, and based off of audience whoops and claps, inspiring to everyone there. I caught bassist Rick Dill singing along with his parts as he stretched over the bass guitar, practically pulling each note out of the instrument with every movement.

The band put on a great show not by playing a few ditties, but by truly involving the audience. Very rarely have I experienced such a connection with live music—each performer bravely shared themselves through their instruments, letting everyone understand the emotion that went into each song. Whether it was bouncy, depressing or sexy, Vintage Trouble understood what it meant to have musical variety and executed it into something almost indescribable.