A walk down Euclid, a step into Paris 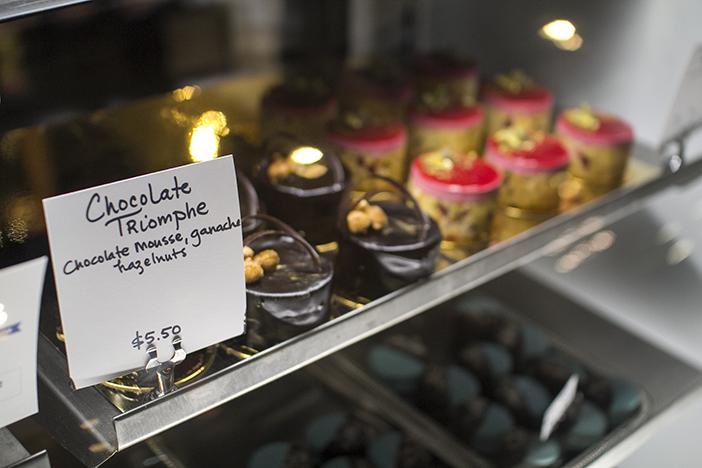 “Bringing a little piece of Paris to Northeast Ohio” reads Coquette Patisserie, a new bakery that opened on Jan. 17 at 11607 Euclid Avenue, near Constantino’s and across from the Cleveland Institute of Art. Indeed, Coquette Patisserie does capture a slice of Paris, from its décor to its picture-perfect (Instagram-perfect, too) pastries.

With familiar and popular French pastries such as macarons and tarts, Coquette Patisserie also brings in the new and unfamiliar savory pastries such as Smorgastarta and chicken liver mousse éclair. Both are built the same way as their pastry cousins, but instead of sweet ingredients that most are used to, Smorgastarta has housemade brioche and other savory ingredients, topped by house-cured salmon arranged in a floral shape, while chicken liver mousse éclair has housemade chicken liver mousse, as its name suggests, and pickled shallots and lingonberries. These pastries fit in with co-owner Shane Culey’s philosophy of trying something new and unique.

Britt-Marie Culey, the other co-owner, graduated from Le Cordon Bleu and did stints in France as well as New York before coming to Cleveland in 2008 with her husband, Shane. What started as a wholesale and catering business burgeoned into something bigger as they started having people ask about a brick-and-mortar store. They soon realized that they needed a shop and finally settled in University Circle, which in their eyes has their target clientele as well as a convenient location with easy access to public transportation.

I personally tried out the Tart Citron, a beautiful lemon tart topped with a sliver of white chocolate and a thin slice of lime. It was tart, tangy and sweet at the same time, encased in a crunchy but delicate crust. Checkout was easy, too, as the store was equipped with an iPad that had a credit card plugin.

Coquette Patisserie also has an alcohol list, curated by the owners to complement the pastries. There is American pale ale, champagne and La Chouffe, which is Belgian strong ale. Like the pastries, the alcohol list tries to “challenge people’s perception of things” says S. Culey. A good example of that is the Jolly Pumpkin, a Michigan beer.

The menu varies seasonally since the ingredients are local and season-based. Coquette Patisserie also has cured meats from Melissa Khoury, a local Cleveland woman.