A walk to fight cancer 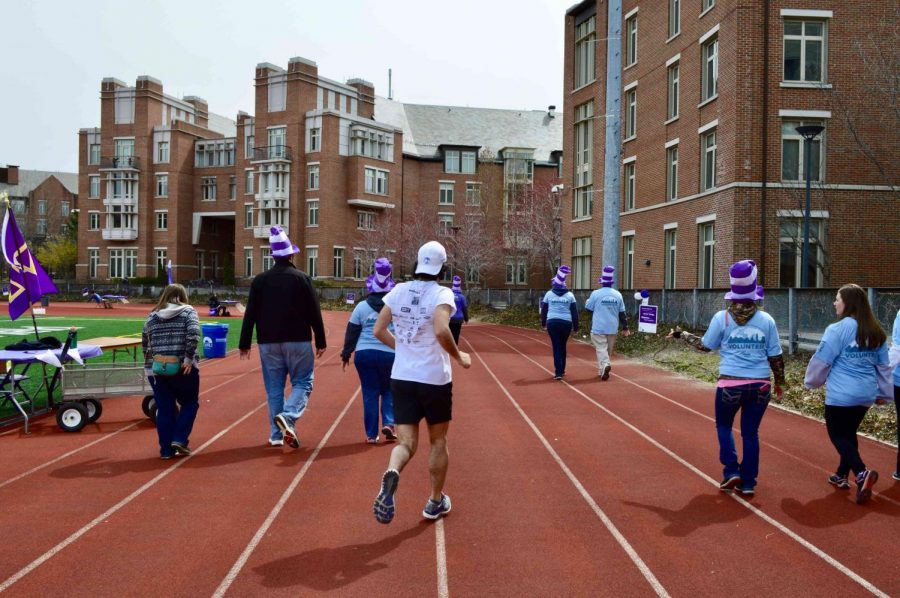 Rakuten Overdrive employees and other participants of Relay for Life walk on the Bill Sudeck Track to fundraise for cancer research.

Case Western Reserve University held its 11th annual Relay for Life event at the Coach Bill Sudeck Track on DiSanto Field. The goal of the fundraiser was to raise money for cancer research through a team-based approach.

Every year, the 15-hour-long event consists of a relay where at least one member from each team must be walking around the track at all times. According to the American Cancer Society (ACS), “cancer never sleeps…and for one night, neither do we.”

CWRU Relay for Life teams raised money for the ACS throughout the year, and, on the day of the event, set up carnival-style games, food vendors and toy shops, which were stationed around the Sudeck Track in continuation of their fundraising efforts.

Various CWRU Greek organizations, clubs and local businesses participated in the fundraiser on Saturday, April 21 and Sunday, April 22. Participants arrived waving fraternity flags or wearing silly costumes. Attendees from Rakuten OverDrive, a local audiobook company, even donned huge purple and white hats to match the event’s Dr. Seuss theme under the mantra, “Cancer: not here, not there, not anywhere.”

Money raised for the ACS helped not only the global fight against cancer, but also the fight on a local level.

According to third-year student and head of the Relay for Life planning committee, Ian Parker, “[The ACS] funds ten different cancer researchers at [CWRU] and in University Circle, so the money we raise here goes straight back into the community.”

Although most of the money raised in Relay for Life goes towards cancer research, the ACS also funds resources such as the Hope Lodge, which provides cancer patients with a place to stay throughout treatment.

Parker said, “One of the things my grandfather went through [during his fight against cancer] was trying to find a place to stay near him because it was just so expensive. What they’re doing is great.”

Through the joint efforts of dozens of CWRU organizations, individuals and local businesses, CWRU’s 2018 Relay for Life fundraiser raised approximately $40,000 for cancer research.