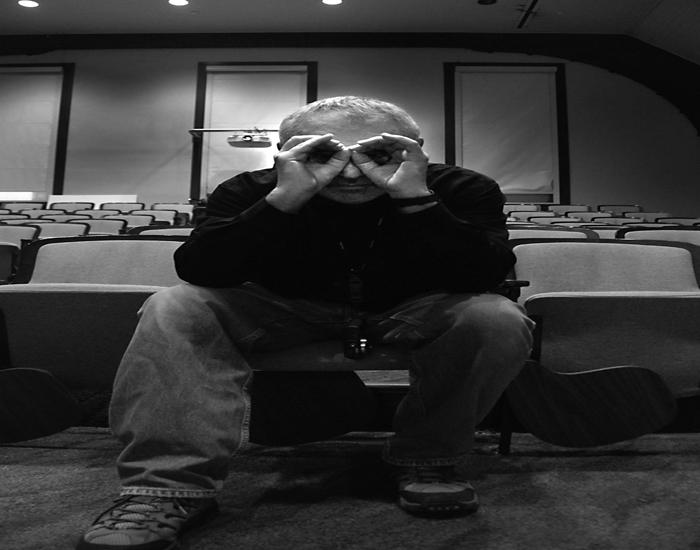 The book catalogues contemporary photographers and artists over the past 20 years, starting with Minor White, Frajndlich’s mentor, whom he met at CWRU. Frajndlich’s photographs become characterizations of his contemporaries by opening up their personalities in relation to their work. Frajndlich became known for his photographs in Art News and Vanity Fair, portraying beloved artists such as Dennis Hopper, Andy Warhol, Robert Rauschenberg, Yoko Ono, and Ed Ruscha. His portraits and self-portraits represent an aggressive and post-modern shift in the depiction of people and the items that represent them.

In an exclusive interview with Frajndlich, he illuminated his work and issues on the identity of the artist. “Even though we know these people’s pictures and we know their really strong images, we don’t know them.  Most photographers hide behind their images and they are anonymous,” says Frajndlich.

In “Penelope’s Hungry Eyes,” Frajndlich accomplishes this by capturing an array of photographers that one may have overlooked or never heard of, or be extremely familiar with. A strong identity is created in every photo that deepens the relationship with these artists and motivates its viewers to walk away with a background in which to explore more sources.

After dropping out of Northwestern University while pursuing a doctorate degree in English, Frajndlich was informed by a student in the Department of Architecture at CWRU of a darkroom that was rarely used. Frajndlich seized the opportunity and began printing his photographs and selling them on Hessler Street for $7 dollars each. He lived in a house on E 115th St. and paid $32 dollars a month in rent, which he managed by selling his photographs and working eight hours a week at a deli where University Circle Convenience now stands.

In 1970, Minor White, a professor at MIT and a widely known photographer, came to CWRU to hold a three-day workshop for photographers on campus. Frajndlich interviewed White for the CWRU Observer, took a few photographs of White, and attended his workshop. “On the second day that Minor was here, I finally got up the nerve to ask him to look at my work. I didn’t really know who he was. If I did I would have been too intimidated,” admits Frajndlich. “He looked at it and basically told me it was sh**.”

White, at the time, had just received a Guggenheim Fellowship Grant and asked Frajndlich to come live with him in Boston, where White would teach Frajndlich how to photograph and Frajndlich would edit White’s writing in return. Frajndlich stayed with White for a year and returned a few years later to continue working with him, after which he received a Kodak grant to travel abroad and began his long career in photograpy.

Frajndlich has been taking photographs for 43 years and doesn’t plan on stopping. According to Frajndlich, “the visual language is universal.”

His future plans consist of publishing a large collection of material on Cindy Sherman, an American photographer who recently debuted an exhibition of over 170 works at MoMA in New York City. His photographs of Sherman were accumulated over several shooting sessions, including one in Akron in 1984 and an assignment for Vanity Fair. He is also planning a gallery in Frankfurt of a Japanese Butoh dancer, with whom Frajndlich travels the world, and capturing the dancer’s relationship with space in photographs.

Frajndlich and Professor Adams will be at the Tregoning & Company gallery on 1300 W 78th St. this Saturday, March 24, to host another talk on “Penelope’s Hungry Eyes.” The featured exhibit in the gallery includes images from the book, and Frajndlich will be there for book signing between 3:30 and 6 p.m.