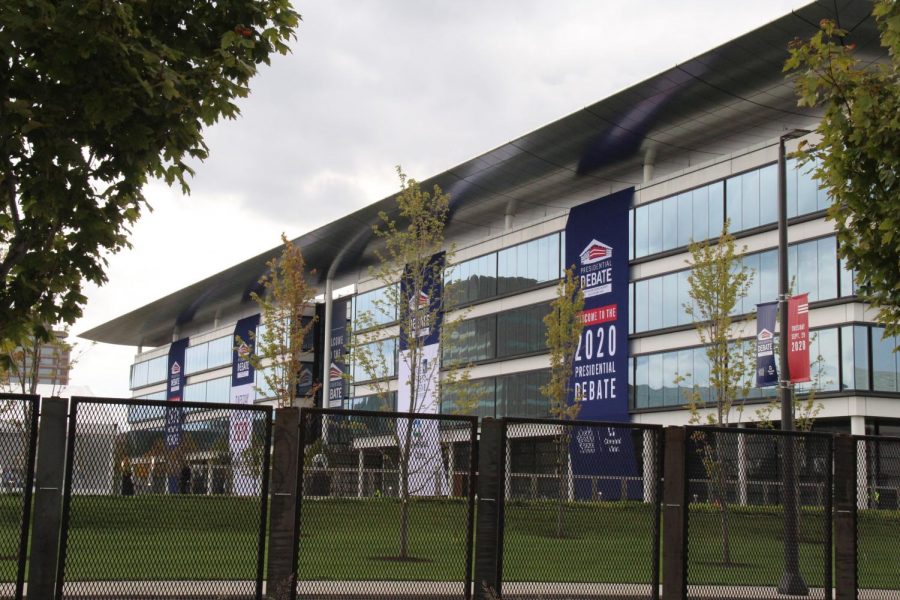 A press pass can get you just about anywhere. This week, it got our executive editor into the first presidential debate.

A press pass is powerful. Like the Green Lantern’s ring or Harry Potter’s magic wand, it imbues its wielder with a special ability—access. With that press pass hanging from your neck, you have the authority to go almost anywhere and talk to almost anyone. The first draft of history belongs to you. You’re a member of the news media, a group as fabled as any.

I didn’t really understand any of this, though, when I secured my press pass for the first presidential debate, hosted jointly by Case Western Reserve University and the Cleveland Clinic, two days before the candidates took the stage in the Health Education Campus (HEC). Sure, I logically knew what having the pass meant—but knowing and understanding are completely different.

The following day, Monday, was when I first started taking advantage of my pass. I explored everywhere I could get into.

I was the among the first—if not the first—media person to check into the Media Filing Center, the lavish room where I would later watch the debate with other credentialed journalists. After checking in, I sat at my assigned desk, in one of the back corners, for several minutes, taking in the cavernous grandeur of the almost empty room.

The Commission on Presidential Debates (CPD) had taken social distancing seriously when they designed the room’s layout. Every media person was allotted a socially distanced desk with an ethernet cable and a multi-socket extension cord. A (very comfortable) chair was also included. In total, there were approximately 100 media stations. The defining feature of the room, though, was the multitude of TVs. From where I was sitting, I could watch all the major American news networks, easily comparing FOX to CNN to ABC, for instance. These features, even in Monday’s stillness, created a serious atmosphere.

After taking that in—and starting to feel the true magnitude of the occasion—I went to the debate stage in the HEC, which was surreal, to say the least. The Sheila and Eric Samson Pavilion, a monstrous open space in the center of the building, was completely dominated by debate paraphernalia. The part of the stage that could be seen on TV was only a small portion of what took up the room.

Out of the cameras’ eyes, there was a mess of metal scaffolding and pipes holding up the vast array of decorations and pumping cool air right on top of the two candidates. Instead of an American dreamscape, the debate center felt like a juxtaposition of pomp and utility in a room that’s main qualification to house it was its size. Seeing that drained the debate of some of its mystique—but it also made it seem more tangible, more real.

The rest of Monday passed quickly as I coordinated my personal coverage and The Observer’s comprehensive coverage of the debate. I scoped out the area immediately outside the restricted zone, hoping to determine where protests would likely emerge the following day. Chris Markham, our director of print, and I gathered supplies for our reporters that were going out into the field the following day. Mainly, though, I mentally prepared myself to face uncertainty. I had little idea what covering the debate would be like.

I woke up on Tuesday with butterflies.

Starting the day again at the Media Filing Center, which was still pretty empty, I got my bearings. The silence of the morning and early afternoon helped me. The calm before the storm, if you will.

At around 3 p.m., I started walking around, talking to some of the people that were already on the streets and observing the proceedings.

One of the first groups I talked to was composed of young men who had come to protest together from a Greater Cleveland-area university. One carried a sign that said “Love mony” on one side and “Hate money” on the other. The first misspelling of money was intentional—it was unclear to me, though, what the intention was. They were asking whoever they met, simply, which side of the sign they agreed with more. They claimed to have no further ideological goals than merely surveying.

A little later I talked to a man dressed in chainmail, a metal helmet and a tunic with the red Templar cross. Politically, he thought of himself as an independent—and he didn’t attend the protests to get involved with the nitty gritty of politics. He attended the protests at Wade Lagoon, and many previous protests throughout Cleveland, as a peacekeeper. “I have a way about me,” he explained. I’m not sure if he understood the violent history of the medieval Templar knights whose insignia he wore.

After talking to more people and helping see The Observer’s other reporters off, I returned to the Media Filing Center. By this point, I had begun to understand press pass’ power. It helped give me the confidence and authority to talk to whomever seemed interesting. Plus, it was incredibly satisfying to walk past someone, notice their media pass and nod, as they nodded back; we both belonged here. Not until the debate was over, though, would I just begin to understand the immense responsibility of covering a presidential debate.

The Media Filing Center was more or less filled about an hour before the debate was scheduled to begin. Reporters sat at their desks, set up with all their equipment. The clacking of fingers on keyboards filled the room. Talking was infrequent and soft. I’m not sure if the coronavirus, the significance of the event or something else entirely fostered this seriousness. I spent this hour observing the other reporters and taking in the moment.

A few moments before the debate, we were struck with technical issues. The CPD staff was having trouble getting the TVs on the same channel with sufficient volume. Some reporters were getting antsy, demanding the problem be sorted out. Luckily, the debate didn’t start quite on time. Those precious minutes allowed the staff to get everything figured out. No harm done.

When the debate began in earnest, the intensity skyrocketed, even though there wasn’t much of a visual change compared to what the reporters were doing before. Typing on computers was still the main activity. Everyone seemed to be taking notes. I followed suit. It struck me that in 40 or 50 years, there will be some students pouring over the newspaper articles we produced in that room, trying to untangle all the confusing threads of what will then be distant history. That notion humbled me.

No one moved for a while after the debate ended. There was pressing copy to get out, after all. Without any immediate need to submit any of my writing, though, I was in a considerably different mental state than many of the other reporters, I would imagine. Still, I didn’t want to be the first to go. I wanted to stay as long as I could and see as much as I could. After a while, some reporters began to go on air, either on the radio or on camera—all in the Media Filing Center. I heard the soothing voices of NPR reporters and foreign languages indecipherable to me from reporters that looked like they came from all across the world. I had never thought about where these after-action reports locationally came from, but I guess it makes sense that reporters do them from wherever they can.

After those reports started to wind down and people began to file out, I left—with a newfound understanding, not knowledge, of the power and responsibility of the press pass.