Actress Turned Nursing Home Queen: On the Importance of Independence 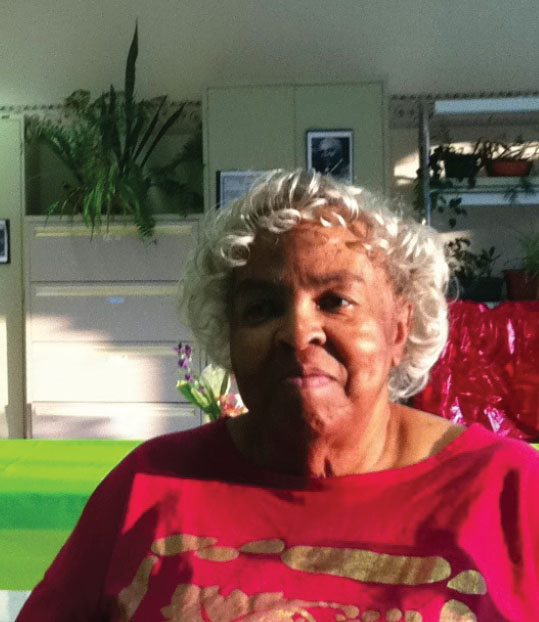 Watson reflects on a life of performing and parenting in the activities room of Eliza Bryant Village, the nation’s oldest African American nursing home in operation.

Eighty year-old Jessie Watson ambles down a green- and bamboo- colored hallway of Eliza Bryant Village, gripping her bronze cane in one hand and a brown railing in the other. Her slow pace and pride in her ability to walk have earned her the nickname of “Slow Motion” among the staff.

Once she reaches the end of the hall, Jerry Hill, the dietary supervisor at EBV, pauses to talk to her. “I’m working on a screenplay all about this place,” he says with a smile, “you’re my leading lady, Miss Watson.”

Watson looks at him skeptically and chuckles. When he turns to leave, Watson, in a faux British accent, says, “I hope to see you in the theater.”

Of the many roles she has played in life, her favorite were on stage.

Rocking back on her bed with her hands clasped, Ms. Watson recalls the adventures and dreams of her late teens at Karamu Theater. Fitting the Swahili definition of karamu, the theater was a place of enjoyment for her. She says her role in The King and I as Tuptim afforded her the greatest romance of her young life. Her freckled and subtly wrinkled face lights up as she remembers.

“I had this thing about liking to act¾ trying to,” she says, “because I was going to BE somebody.”

Since her time in the theater, Watson has been many somebodies from tomboy, to actress, to typist, to church secretary, to wife, to mother, to divorcee, to grandmother. Most recently, Watson has earned herself the role “The Queen” of Eliza Bryant.

Every Sunday, Watson dresses up, making sure silver ringlets of hair hang delicately across her forehead beneath a silver sequined beret. Her garb and mannerisms elicit images of royalty for the staff at Eliza Bryant Village. For Watson, her jurisdiction and domain are modest.

“I’m the queen of this bed,” she says, slapping the mattress, “this raggedy gown, and that’s about all I’m queen of.”

Even before becoming “The Queen,” Watson enjoyed control and independence. She never became domesticated, she says, because she would stay outside and play with her seven brothers instead of listening to her mother. Even as an adult, she pursued autonomy as she and her husband divorced. “I couldn’t keep my marriage together,” Watson says, “because I had strong ideas as to what I should¾what I was aspiring to do.”

In some ways, the story of her marriage is in her hands; they are scarred, not from cooking and cleaning, as her husband had wanted, but from a childhood of backyard baseball and bike riding; an adulthood of childcare and Church work. Regardless of her age, Watson has always enjoyed control.

What she cannot control, even now as Queen, are time and aging, but she doesn’t seem to mind.

“I take the aches and pains that I have to,” she says, “I’m not ready to die yet. I have no control over it should it happen, you know. But, I’m willing to accept aging.”

Straightening out her green velour sweatpant, and red and white striped shirt, Watson stands at the fullest posture her age allows, and walks out of her room towards a Jamaican nurse who calls her “The Queen.”

Watson wags her cane jokingly at the nurse, imitating the Jamaican accent, “Your wish is my command,” she says and continues down the hall, an unexpected stage for the aging actress.