Campaigning for Clinton, actor Adam Scott made appearance on campus 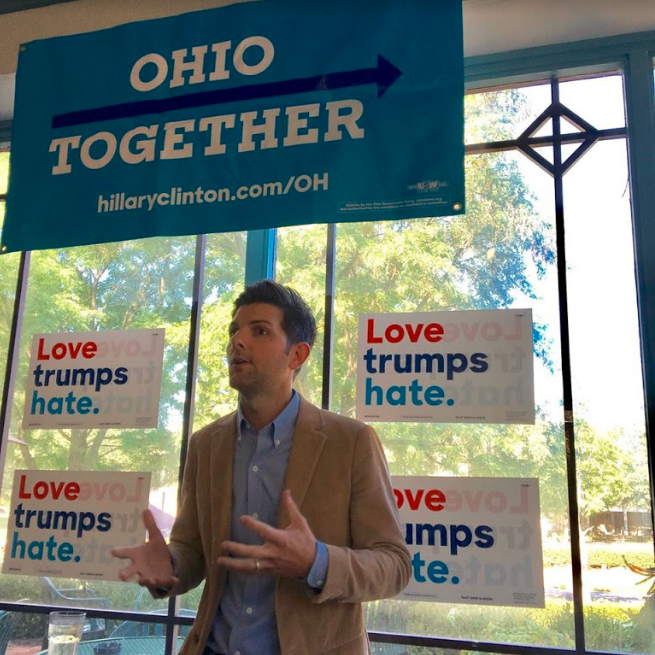 Adam Scott is speaking in front of audience from CWRU and the Cleveland community.

If you’ve seen “Parks and Recreation,” you most definitely will know the calzone-loving politician and former Pawnee city manager, Ben Wyatt, played by actor Adam Scott. But what you might not know is how similar Scott and Wyatt are in reality, as both are mature and oriented towards their community. On Sept. 25, at 11 a.m., Scott came to The Coffee House at University Circle on Juniper Road to talk to students at Case Western Reserve University and members of the Cleveland community about registering citizens to vote in Cleveland and being politically engaged in supporting Hillary Clinton’s democratic values that “let all individuals have a voice.”

“Love Trumps Hate” posters could be seen on the glass windows when entering the side room of The Coffee House that fit around 40 people inside. Student volunteers were ready at the front of the room to help with voter registration for students who had not updated their place of residence yet. A Cleveland native who was ecstatic to meet Scott had brought her two-year-old son, who was wearing a green t-shirt referencing Li’l Sebastian from “Parks and Recreation.” Many CWRU students were not only here to meet Scott, but also to hear what he had to say about Clinton and his viewpoint on the United States’ current political situation. People were introducing themselves to one another before the event began and the room was full of conversation and excitement.

After many false alarms, Scott finally arrived and everyone in the room was wide-eyed and enthusiastic to hear him speak. He calmly entered and introduced himself to the main coordinators, volunteers and interns from the Clinton campaign. Scott captured everyone’s attention at once when he began speaking. He gave a brief and pathos-driven speech regarding the importance of voting and using one’s rights to make an impact on society. Scott also mentioned the previous election when Mitt Romney ran against Barack Obama and how he spoke up then just as he does now. He used this experience to tell the audience that it is “more important than ever before” for voters to speak up about their opinions.

By describing Clinton’s opponent as misrepresentative of the United States and unabiding with the American values of treating every individual with respect, Scott emphasized that “this election is vital for young people to take part in.”

He also made one particular statement in his speech referencing volunteers that touched everyone in the room: “I want my children to grow up to be like you.”

After finishing his speech, Scott brought his personality to each individual conversation and took the time to take pictures with every person in the room. There was a long line that extended outside of the building and one-by-one students and Cleveland natives spoke to and thanked Scott. Some conversations included how much students loved watching him as Wyatt in “Parks and Recreation” and how much of an impact he has made on their lives by visiting CWRU in person.