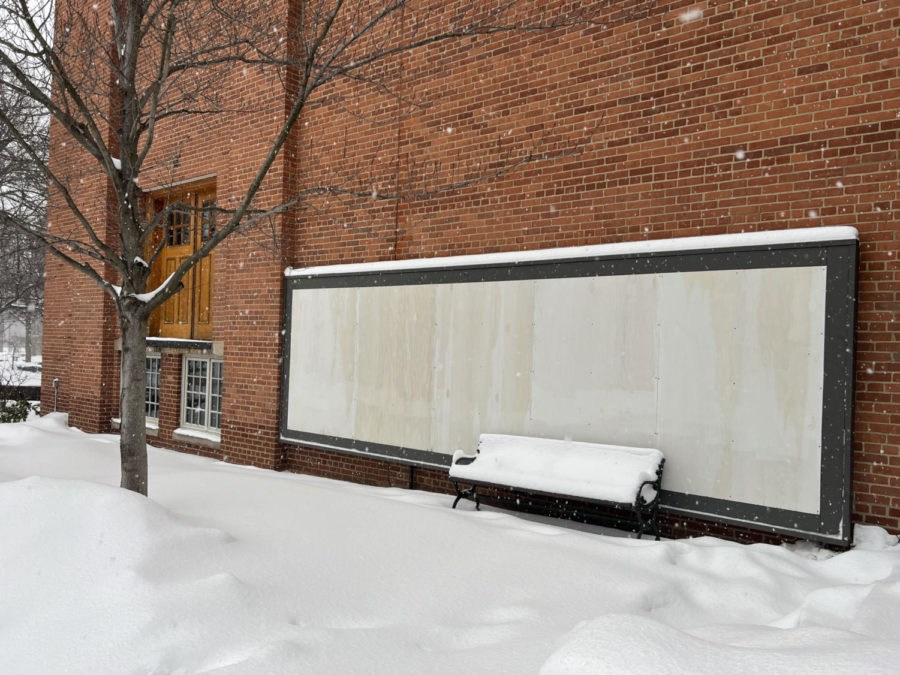 The newly built Advocacy Wall on the side of Eldred Theater offers a fresh and well-frequented space for the student voice to be heard.

In June 2020, at the height of the protests surrounding racial injustice and police brutality against African Americans, the Spirit Wall between the Thwing Center and the Tinkham Veale University Center was painted over with the statement, “BLACK LIVES MATTER,” along with a list of those murdered by police officers, including the (at the time) recently deceased George Floyd.

In doing so, the space traditionally used by student organizations to promote their events transformed into a lasting mural and a declaration of values. Trouble arose in August 2021 when all students finally returned to campus after several remote semesters. Rules around the Spirit Wall were questioned when a student attempted to paint over the mural early in the semester, leading to discussions over what should be done. The Student Presidents’ Roundtable (SPR)—a board composed of the presidents of all the major umbrella student organizations, including the Undergraduate Diversity Collaborative (UDC), University Media Board (UMB), University Program Board (UPB) and Undergraduate Student Government (USG)—came together to find a solution. Fourth-year pre-law student and SPR Chair Jim FitzGibbon organized meetings with all those concerned, including the Black Student Union (BSU), UDC and USG, with the end result being the new Advocacy Wall.

“These discussions resulted in three primary objectives,” FitzGibbon said. “First, we wanted to maintain some form of mural to the Black Lives Matter movement, which is important to many students at CWRU and has had a transformative impact on our society. Second, we wanted to return the Spirit Wall, or some iteration of it, to its original purpose of providing a space for all students to post advertisements, messages and more. And third, we wanted to increase expression spaces on campus in general, as the free exchange of ideas is vital to the role of universities in our society.”

On Jan. 24, the Advocacy Wall was finally finished, being placed on the side of the former Eldred Theater, in the middle of the Case Quad. With Eldred soon to be renovated into a student center, it was picked for its central location and visibility. The renovation of Eldred is expected to be completed in August, by the start of the fall semester. SPR will also be heavily involved in this process to ensure that the student voice is heard as the former theater is converted into a student center with study spaces, meeting rooms and performance spaces.

As to why SPR was central to the project, FitzGibbon explained, “The SPR works with issues that impact the entire campus community as well as multiple constituent boards. The Spirit Wall is used by all eight boards of the SPR. Thus, we wanted to tackle this issue as a group, as this would ensure that each board had a say in the process.”

“The free exchange of ideas is an integral component to university life. By increasing the amount of space through which students can share their views, and by creating a dedicated space for the expression and advocacy of those views, we can live up to the mission of [CWRU] to promote a culture of global citizenship,” Fitzgibbon added. “It is the hope of the SPR that this new space will provoke discussion and understanding regarding the multitude of causes supported across the university, ultimately creating a stronger campus.”