African American Art alumni exhibit explores the past and present 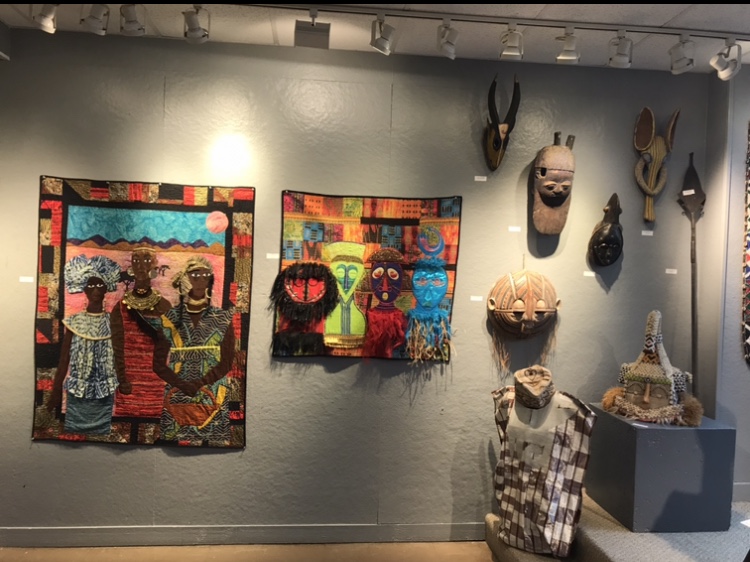 When entering the African American Alumni Art Exhibition at the Case Western Reserve University Art Studio Gallery, you see West African traditional fabrics and masks, then modern quilts and photographs of LeBron James. It tells the story of West African culture, what they went through and what their sons and daughters are creating now.

“It’s about how powerful African American people must be, because in their lineage there is a person who suffered coming across the Atlantic in a slave boat and the mistreatment of slavery,” said artist Napoleon Dismuke, whose three paintings about slavery are right next to the Art Education Director Tim Shuckerow’s ethnographic collection.

“There is someone in my lineage and the lineage of every African American who suffered that. The beauty of some of the masks in Tim’s West African collection is that they are showing the power of the African people.”

The display features work by eight CWRU alumni and one faculty member.

The work of Shuckerow’s former students often display the influence of these traditional art forms, so having the two featured side-by-side adds context to the modern works by featuring works by their artistic predecessors.

Shuckerow has given presentations in over 200 schools, with many of the artists featured in the exhibit having also participated in them. Shuckerow, along with Nigerian husband and wife duo Bodunde and Grace Motoni (whose work is also on display in the gallery) demonstrate traditional drum rituals and costumes to students, enabling them to learn culture through practice, instead of through a textbook.

“You can see the objects that are being used in the artwork,” said Shuckerow. “You see the mask on this quilt (points to Sandra Noble’s “Diversity”), and then you see the traditional mask here (points toward mask with similar design).”

Shuckerow became a counselor to the king of Bafounda, Fó Tchio in Western Cameroon. The ceremonial robe gifted to him is part of the display.

One piece by Carver features Shuckerow as Maharishi Mahesh Yogi, the spiritual teacher to the Beatles, with four alumni around him representing the British pop icons.

“He taught us how to educate our children,” said Carver. “Without him, we wouldn’t be as good as we are.”

Carver’s other mixed media pieces similarly work with modern icons, often with a connection to baroque art. “What it Has Come to Be” is based on “The Supper at Emmaus” by Renaissance painter Caravaggio, but replaces Christ and his disciples with icons of social justice. Boxer Muhammad Ali is Christ, with Black Panther Party leader Fred Hampton, actor and activist Harry Belafonte and presidential candidate Bernie Sanders sitting around Ali.

Although Sanders may seem out of place in this collection of black icons from the 50s, 60s and 70s, Carver said that Sanders comes from the same tradition of creating a cross-racial “rainbow” coalition that Hampton tried to establish.

Carver uses ceramic tiles to add texture to an image of Miles Davis with his trumpet. The rising and falling squares and rectangles are meant to show the fragmentation of his life and work; Davis went from being a relatively straight-ahead standards player when he began his career in the 40s, to creating music with hip-hop producer Easy Mo Bee, who would go on to work with The Notorious B.I.G. towards the end of his life in the late 1980s.

Photographer and co-curator Georgio Sabino III focused on two of his most famous subjects, James and the Cleveland Cavaliers, and Barack Obama. His photographs of James featured a mix of standard photography and pop art collage, inspired by artists like Keith Haring and Roy Lichtenstein. His work brings about a dual nostalgia for both the pop art that he quotes and for the historical figures he celebrates.

“We all tie in what we see about the African American community,” said Sabino. “With the use of color, of patterns. Here I’m showing [James]’ thought process, what he’s thinking, whether he is a Laker or like, on the top-right, if he is listening to music and dancing. To show what he can accomplish with his form of art.”

It took four weeks for the curators to set up the exhibition. Though each artist’s work is grouped together, Noble’s tapestries are spread out throughout the room, giving her vibrant tapestries room to breathe with the added context of other pieces, with the work of the co-founder of the Cleveland African American Quilt and Doll Guild unifying the various styles of art. Her pieces especially benefit from Shuckerow’s collection, as the geometric patterns and color of her work has a similar form to works from the West African tradition.

“I liked masks when I was an art teacher,” said Noble, a part-time faculty member at CWRU. “When I did that one piece with the masks (‘Diversity’), I was thinking about diversity. That everyone is not alike just because we are one color, that not everyone comes from the same culture, as far as Africa is concerned. We need to recognize our differences, but at the same time, we need to recognize our similarities. There are so many instances where people are clumped together and not recognized as individuals.”

The exhibit will run until March 6, with a closing reception from 5 to 10 p.m. There will be a closing panel discussion featuring Carver, Noble, Jerome White, Sabino, Arnold and Shuckerow as moderators from 7 to 8 p.m.

“The idea of making art and seeing art is something that you have a talent for, and it’s honed to then see art in anything,” said Dismuke. “The only thing you have to realize is that art comes from Mother Earth.”