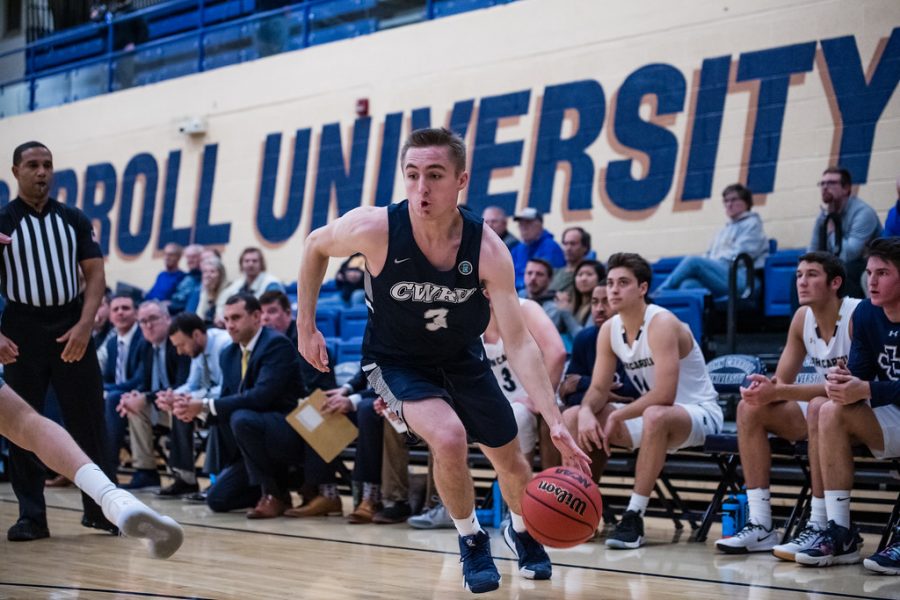 While most students were finishing their exams or heading home, during winter break, members of the Case Western Reserve University men’s basketball team were hustling for loose balls, setting screens and driving to the basket. The team secured three wins and one loss since the end of finals in mid-December. After starting out slowly, the team’s record has now improved to 8-4. Head Coach Todd McGuinness partially attributed the team’s better fortunes to improvements in defense.

“We got a little bit healthier and started playing better defense,” said McGuinness. “We changed a few strategies on defense which have really helped.”

On Dec. 18 and 19, the team played in the 2019 HoopMIA D3 Holiday Shootout, an annual event held in Miami, Florida that attracts D3 schools from across the country. With strong performances on both days, the Spartans were able to secure wins over Alvernia University and the University of Massachusetts Dartmouth by scores of 65-64 and 90-83, respectively.

A true nailbiter, CWRU’s first game, against Alvernia, came down to the last possession. Trailing by three points, with the shot clock already turned off, fourth-year forward Michael Hollis made a clutch layup to bring the Spartans within one point of Alvernia. Enacting a tried-and-true strategy, the Spartans quickly fouled Alvernia after the inbound pass. Since the foul wasn’t during a shot attempt, Alvernia was awarded a one-and-one opportunity, where if they made the first free throw, they would be able to shoot a second. Alvernia missed the first throw and, thus, were ineligible for the second, giving CWRU the ball back with plenty of time to make a play. Hollis initiated the play, passing to third-year guard Ignas Masiulionis, who was able to score two points and put the Spartans up by one with seven seconds remaining. CWRU was able to hold on for Alvernia’s last possession, securing the win.

CWRU’s second game of the shootout was equally entertaining. Throughout the entire first half and through three-quarters of the second, the UMass Dartmouth Corsairs dominated the Spartans. The Corsairs led for that entire time, almost 90 percent of the game. However, as the game got down to crunch time, the Spartans kicked it into another gear. With 5:20 remaining in the game, first-year forward Cole Frilling capped off a 15-4 CWRU run with two free throws, giving the Spartans their first lead of the game. For the next three and a half minutes, the Spartans and the Corsairs battled, with neither team able to secure more than a momentary lead. With only 1:47 left in regulation, the game was tied. Then, third-year guard Antonio Ionadi sunk a three-point shot, starting a run that, buoyed by a Frilling steal, was able to put the Spartans up by five points with a minute remaining. Although the Corsairs attempted to come back, a clutch offensive rebound secured by fourth-year Sam Hansen secured the win for CWRU.

Many Spartans performed notably well in the HoopMIA Shootout. In particular, Frilling’s performance against UMass Dartmouth was spectacular. Frilling notched his third career double-double and led the team in scoring with a statline of 27/10/1 and three steals in 35 minutes. Hollis also had strong performances in both games, recording consecutive double-doubles and leading the team in rebounds.

After taking a 15-day break off for the holidays, the Spartans returned to play two more games, against Albion College and Carnegie Mellon University, before classes began.

Although the Spartans maintained a healthy lead into the final half against Albion, they were unable to respond to a strong run in the game’s closing minutes. The Spartans eventually lost, 74-69, ending their five-game winning streak, which included zero losses in the month of December. With their victory, Albion improved to 9-2.

CWRU rebounded with a strong performance in their first UAA conference game at home against Carnegie Mellon. The Spartans took the lead with a little over 15 minutes remaining. Refusing to let Carnegie Mellon come back, CWRU led until regulation ended, winning 88-81. Frilling, once again, had a big game, leading all scorers with 27 points. Coach McGuinness, however, stressed the team’s success came from all contributions from each player.

“[We] have a good group of players that enjoy playing basketball and play hard in games,” McGuinness explained. “With our team, any player could be our leading scorer every night.”

CWRU will face their next conference opponent, No. 13 ranked Washington University in St. Louis, at home on Friday, Jan. 17 in Horsburgh Gymnasium at 8 p.m.