After opening victory, Spartans to take on Oberlin 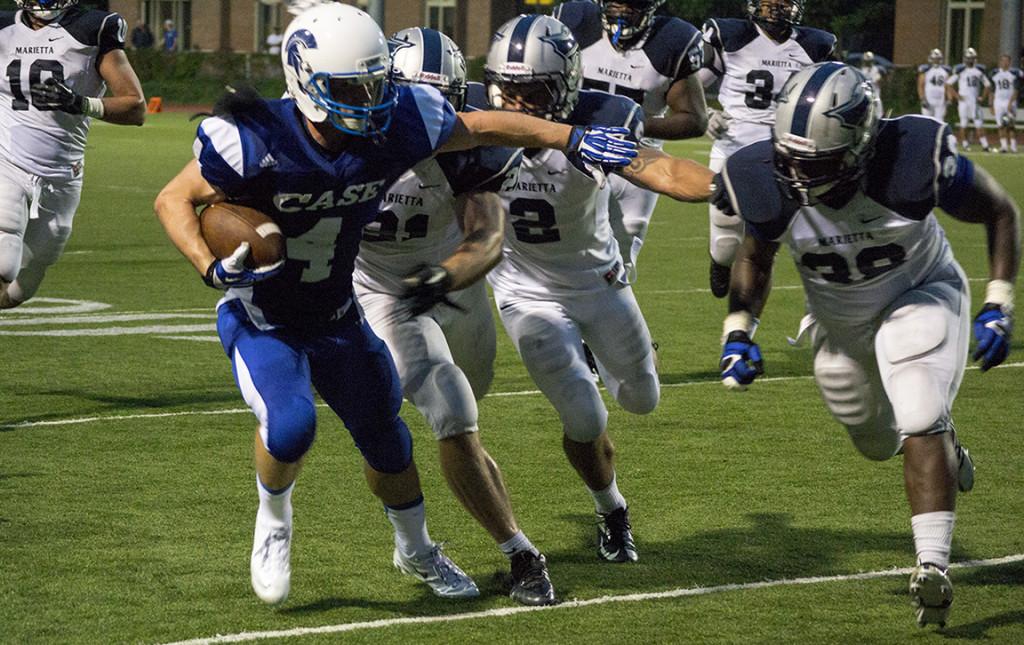 After their victory against Marietta, the Spartan football team is heading to Oberlin this Sunday to take on the Yeomen at Savage Stadium.

Last Saturday, the Spartans took down the Pioneers 37-16 under the lights at Case Field in the season opener, putting up impressive numbers on both offense and defense. Despite several problems, including an unsportsmanlike conduct penalty on the opening kick return, Case Western kept the lead and never lost it, cementing their lead in the second half and maintaining it against a Pioneer resurgence in the fourth quarter against the Spartans’ third and fourth strings.

“We feel happy with the way we played in the first game,” said head coach Greg Debeljak of the victory. “We feel confident, but we know we have to improve.”

Historically, the Spartans have done very well versus Oberlin, going 31-5, including an ongoing 28 game win streak. The last time the two teams met, in 2012, the game went into overtime but eventually resulted in a Case Western victory after a pass by then-sophomore quarterback Billy Beecher. It was his first pass for a touchdown in collegiate play.

But despite that comparative squeaker during the two teams’ last match up, head coach Greg Debeljak says the Spartans are ready to hit the road. “I don’t think going on the road affects us as much as people would think,” he said. “We don’t view it as a disadvantage.”

Oberlin, located in nearby Lorain County, has a particularly strong ground game, presenting another challenge for the Spartans young defense. In Friday’s home opener, three Spartan sophomores, Everett Dishong, Gavin Sandidge and Aaron Weisberg put up impressive tackling numbers. Dishong had 12, with 1.5 for a loss, Sandidge had 12 with 2 for a loss and Weisberg had 8 tackles, including 4 pass break ups.

Though still relatively unproven, the defensive squad will be tested by Oberlin running backs Moses Richardson and Blake Buckhannon, who put up 108 yards on 20 carries and 38 yards on 12 carries, respectively. Buckhannon also wracked up 59 yards on six catches in the air.

Also indicative of Oberlin’s power on the ground is sophomore quarterback Lucas Poggiali, who put 110 yards rushing on the board last year, along with a single rushing touchdown.

To Debeljak, Oberlin’s ground-based offense will be a test of his defense, but one he feels will be fruitful. “We certainly recognize that right now [running] is probably the strength of their offense, and we’ll do some things with game planning to take that into account,” he said.

Opposing the Spartan defense will be a marquee offense, headed by running back Kenny Riordan and quarterbacks Billy Beecher and Erick Olson. The Spartans have structured their offense to highlight the strength of their backs, with Beecher and Riordan combining for a strong presence on the ground while Olson compliments them in the air. Riordan, a senior, rushed for 51 yards and two touchdowns in last week’s game, showing a strong recovery from last year’s injury that ended his 2012 season early.

Manny Sicre, a junior, also managed to put 37 yards on the board, including a 24 yard carry, despite almost not dressing for last week’s game due to a high ankle sprain. He is expected to dress for the Oberlin game, though the transition from Case Field’s turf to Savage Stadium’s grass may prove problematic.

Beecher and Olson both had a solid offensive presence versus Marietta, with Beecher collecting 127 yards, and Olson putting up 119 yards and a touchdown.

It remains to be seen if freshman John Mangelluzzi will replicate his showing from last week’s victory, where he put up 96 receiving yards including a 42 yard reception. Though he is less experienced than some of his counterparts, the sheer athleticism he showed in last week’s game seems indicative of a promising collegiate career.

“He’s certainly a kid we recognize as talented and we’ll devise ways to get him the ball, but slowly. We’re not going to throw a lot at him, because he’s still mentally trying to figure things out,” said Debeljak of Mangelluzzi. “But physically, he’s obviously a talent, so we’ll try and find ways to get him the ball more and more as the year goes on.”

The Spartans will play Oberlin at Savage Stadium on Sunday at 1 p.m. Their next home game is versus Linfield on Sept. 28.