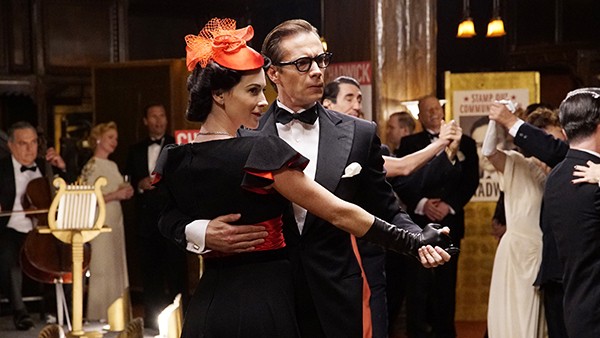 ‘Life of the Party’ begins with Wilkes losing control to the Zero Matter void, prompting Carter, Jarvis and Sousa to concoct a plan to take some from Frost. But with Carter seriously injured, she needs to ask for help from none other than Underwood, who has been locked up by the FBI. Unsurprisingly, Underwood betrays Carter and the gang, but is then promptly captured by Frost, but Jarvis manages to recover the blood sample to finally let Wilkes regain his corporal form.

On the same night, Frost shows expansion of her Zero Matter powers when she is betrayed by her husband in front of the Council of Nine. The Council of Nine quickly becomes the Council of Four with Frost in control. Everett does an excellent job portraying the power hungry Frost. You can see the craziness in her eyes and her smile and the power in her posture. Additionally, the beginning of the scene is shot from up and behind Frost, making it look like she is towering over the council.

Meanwhile, Carter is sidelined with Sousa, monitoring Jarvis and Underwood. Sousa admits his engagement broke off because of Carter and then the two almost kiss, bringing the Carter-Sousa-Wilkes love triangle to the forefront. But, as is typical of “Agent Carter,” it is quickly discarded to focus on the action. Carter and Sousa handle the encounter later on like normal adults, awkwardly talking around the subject.

Carter does eventually have a heart-to-heart with Jarvis in ‘Monsters.’ In the scene, she expresses her conflict over trying to choose the right man. D’Arcy switches well from his normal comedic role, to a serious role and his chemistry with Atwell plays really well on screen. Their chemistry shines even brighter in the last scene after Jarvis’s wife Ana (Lotte Verbeek) is shot. Ana had been worrying for both episodes about Jarvis’s safety, and Jarvis’s guilt comes through in D’Arcy’s expressions. Atwell does an excellent job of showing Carter’s concern for her best friend, something both the actors and characters have built throughout the series. D’Arcy shows his strength as an actor in the preceding scenes, visibly taking charge when he realizes her life is threatened.

The reason Ana worried so much, Whitney Frost, tortured Underwood after council member Vernon Masters couldn’t do it. Regan portrays Underwood well in the scene with Masters, coldly and bluntly stating how she is resistant to torture. Her wisecracking continues with Frost, but ends immediately when Frost chokes her with Zero Matter. Underwood is obviously shaken to the core, and Regan does an excellent job carrying this over into later scenes.

“Agent Carter” is trending in the right direction in the latter half of the season, with Frost a formidable foe and Carter needing to finally make a decision in her personal life.