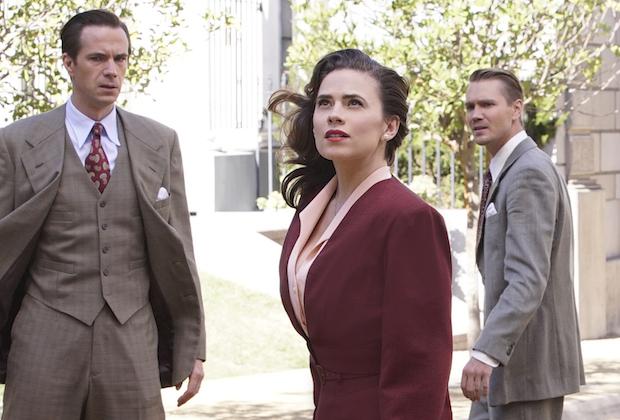 Though the end of the season-long plot was a bit anticlimactic, “Agent Carter” ended its sophomore season on a high note, punctuating what it does best, humor an inter-character relationships.

The finale centers on Peggy Carter (Hayley Atwell), Daniel Sousa (Enver Gjokaj), Edwin Jarvis (James D’Arcy), Jason Wilkes (Reggie Austin) and Howard Stark (Dominic Cooper) trying to stop Whitney Frost (Wynn Everett) from building a portal to another dimension. After the explosion ending last episode, Frost absorbed all of the Zero Matter that was inside Wilkes, and the protagonists barely escaped. Then Carter and company get some unexpected help in Joseph Manfredi (Ken Marino), who wants to save the cracked Frost from the Zero Matter he thinks is destroying her.

After learning about the portal, scientists Wilkes, Stark and Aloysius Samberly (Matt Braunger) get to work building the portal to lure Frost and then use gamma radiation to destroy Zero Matter for good. This leads to the anticlimactic end of the Zero Matter plot as Frost falls for the trap and all of the matter is simply sucked into the other dimension. After saving the world, all the protagonists get the nice ending they deserve. Wilkes works for Stark, Jarvis is reunited with Ana and Carter and Sousa end up romantically involved, finally putting an end to the two season long question.

The one aspect that differentiated “Agent Carter” from its Marvel television siblings “Jessica Jones,” “Daredevil” and “Agents of S.H.I.E.L.D.” was the light-heartedness and humor. In the finale, the show really emphasized this, especially with the return of Stark. The womanizing, genius billionaire stole every scene he was in with throwaway one liners, pulled off excellently by Cooper. A great example would be Stark unsuccessfully golfing into the portal while the protagonists wait for Frost. The fusion of the nonchalance and seriousness define “Agent Carter.”

While it’s great to build a show on humor, a spy thriller needs to have thrilling moments, and there weren’t any in the finale. The climax of the episode was underwhelming and felt rushed. The most tension filled moment, when the ensemble stops Sousa from being sucked into the portal, was ineffective, because the audience knew he would survive especially after Wilkes previously survived an explosion.

Despite the climax’s faults, however, the end of the episode (and season) was still strong because of the character relationships. Each character’s ending was satisfying because every character was built up throughout the season. When Jarvis is shocked that Carter ordered a taxi to the airport, this is an expected reaction based on the Jarvis who lives to go on adventures with Carter. Though the Wilkes-Carter romantic relationship seemed promising at the beginning of the season, both characters knew it just wouldn’t work out. The chemistry between Atwell and Austin reflected the unfulfilled potential of the relationship.

The end of season two was satisfyingly fun, like the rest of the show. With the potential for this to be the final season, “Agent Carter” finished well, managing to heartwarmingly conclude each character’s story arc while also leaving a small cliffhanger in case the series does get renewed.