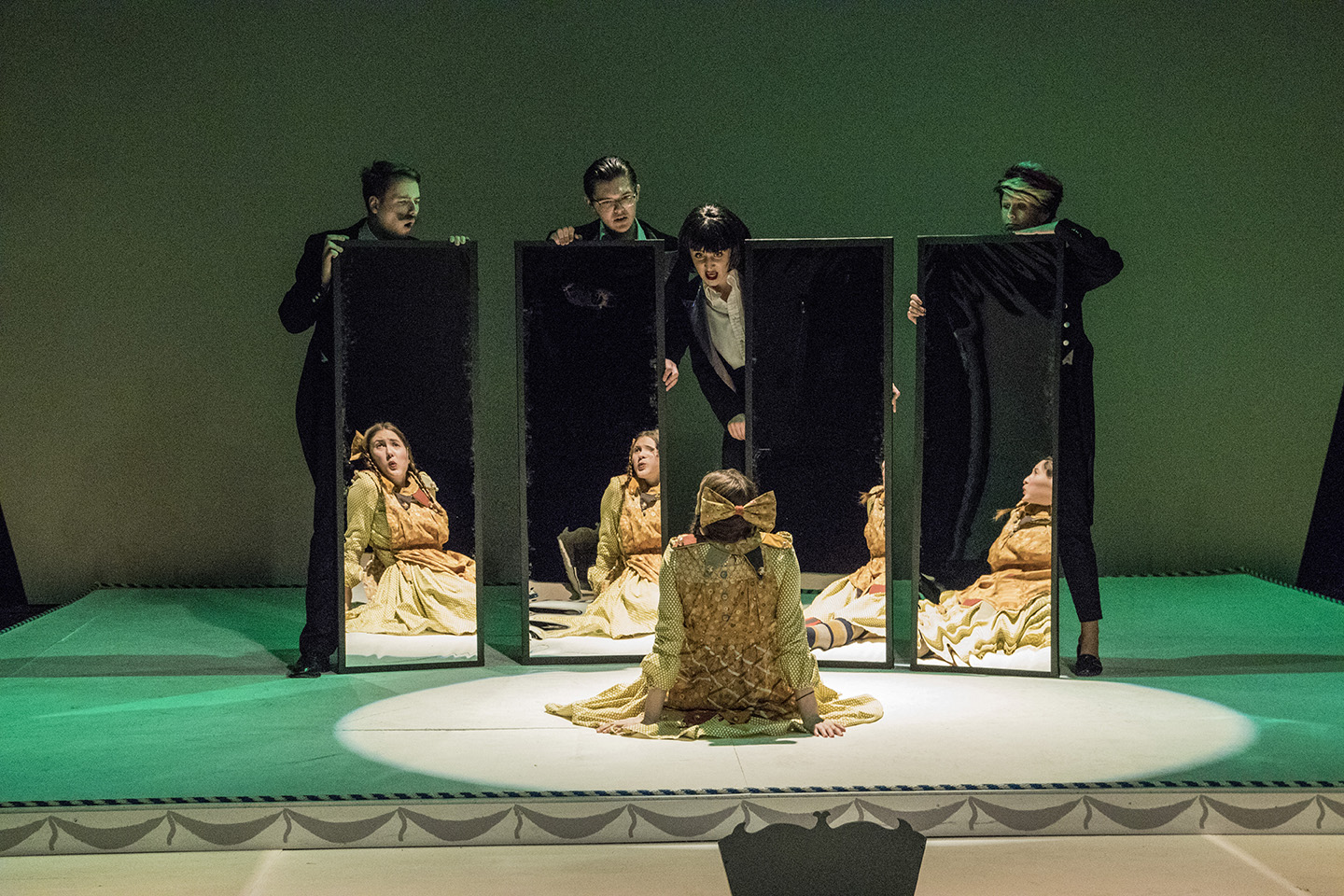 This past weekend Eldred Theater was brought to life with the uniquely reassuring play, “Aliens with Extraordinary Skills.” With a plot centering on a naïve Moldovan clown, her girl crazy clown partner and the acquaintances they make after moving to New York as illegal “aliens” (hence the name), the play was not at all what I expected. Instead of the weird and silly play about clowns I thought I was walking into, I was met with a poignant depiction of life as an immigrant in the big and bad city of New York. Opening with the intense screeches of a violin and a spotlight on Nadia, played by Olivia Taliaferro (who nails the Eastern European accent) telling an innocent story with the aid of balloon animals, the play’s strangely hopeful tone was established pretty immediately. The premise of the play is pretty simple: two Eastern European clowns—Nadia and Borat, played energetically by Evan Bramber—immigrate to New York City for a fresh start, where they meet two New Yorkers already struggling in their own way. Nadia is the central character here and she is plagued by four Immigration and Naturalization Service (INS) agents from her first steps in New York.

The INS agents are introduced as they lay out a rope on the stage, creating a bit of a cage in which to contain the characters and imbuing the play with a slightly creepy tone. The four agents are sharp, scary and unwavering in their attacks on Nadia. Portrayed by Olivia Zabrodsky, Grant Simonson, Tony Moczewski and Harper Case, the INS agents and their scenes are appropriately intimidating, and they highlight the constant struggle immigrants face to live in their new country. These scenes come abruptly and with the distinct purpose to lend discord to Nadia’s life as things begin to look up for her.

Once Nadia meets the passionate and sexy Lupita, an aspiring Dominican actress, her life in New York begins to take shape. Lupita, played by first-year Nicole Coury, accepts Nadia and pushes her to start life in the “real world.” Lupita is played vibrantly, her role as a struggling immigrant not overlooked as Coury captures the moments where Lupita falters. Lupita leads Nadia to meet Bob, an initially creepy character who lends the play much of its humor. Played hilariously by Brett DiCello, Bob starts as a one-dimensional native New Yorker looking for a couch and a night with a woman. However, as the play goes on, he transitions into a sympathetic figure and brings much of the warmth to the play. Despite Nadia’s initial reliance on her Russian clown partner Borat, Nadia becomes her own person and begins to start a life for herself even as the reality of life in New York hits her hard.

This play takes the classic immigrant story and expands it to cover the turmoil that immigrants experience as they struggle to fit in their new culture and forget life back home. The set of the play is simple and the wings of the stage are exposed so the audience sees the construction and movement of set pieces. This adds a level of openness to the set and mimics the closeness we feel with Nadia. This piece made me laugh, cry and cringe—but more importantly it made me feel and see the vulnerabilities of its characters. A story of being an “alien with extraordinary skills,” or an immigrant with much to offer, is universal to our country and this little play in Eldred captured their story beautifully.