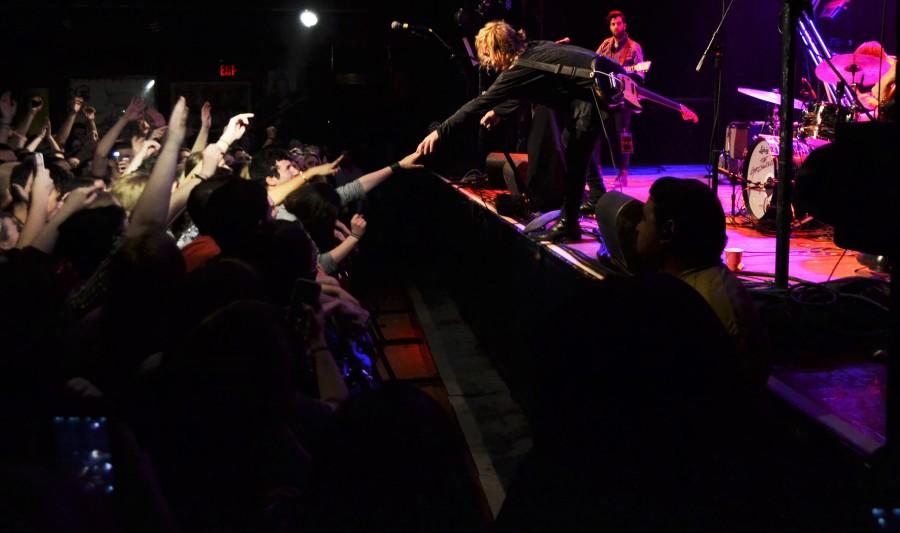 Walk the Moon and The Griswolds put on a colorful show at the House of Blues to a sold-out crowd of teenagers and college students.

At the Cleveland House of Blues last Friday, April 3, lines of face-painted teens and 20-somethings stood in line in a light Cleveland drizzle, waiting to get inside for a sold-out show featuring Walk the Moon and opener The Griswolds.

Some face paint was smudged, some remained intact. Everyone squeezed their way forward, closer to the stage, closer to the bands. By the time this crowd fully reached the dance floor, the venue was crammed.

There was no turning back.

And a sold-out show to support a super-successful Ohio band? Solid.

But… it’s difficult to truly enjoy a concert that was fun, innovating and musically on-point, when you are in a crowd of people that isn’t too good.

Much of the audience seemed more intent on forcing their way to a good Snapchat rather than enjoying the music. In every direction, iPhones and Samsung Galaxies hovered in the air, taking selfies or videotaping the performance.

It became so ridiculous, that at one point Walk the Moon singer Nick Petricca called the crowd out. “We think cell phones are great and all, technology and all that,” Petricca said, “but we think you’d be having a whole lot more fun if you were participating.”

(Ironically, when the next song started, the bright white light of phone screens dotted the audience once more.)

The negative crowd went beyond just a cell phone obsession, though. Case Western Reserve University freshman Liana Kabins worked her way into the crowd throughout the show so she could see the bands better.

“The crowd was aggressive. It was a bunch of teenage- and college-aged girls all wanting to get to the front. It was kind of gross with a lot of bony elbows and hair,” she said. “Despite the grossness of the crowd, the atmosphere was electric and everyone was having a great time.”

CWRU freshman Claire Holliday had a similar experience. “I don’t think the House of Blues was the right setting for [Walk the Moon], or the crowd control was lax, because most of the time I was jammed into the person in front of me,” said Holliday.

Of course once you worked past the pet peeve that was the audience, the show itself was incredible.

The Griswolds did more than the duty required of an opener. While most people were there to see Walk the Moon, many walked out as new fans of the Australian four-piece indie band. “Mississippi” and “Beware the Dog” saw a hopping, singing-along crowd. Their upbeat, partying, Vampire Weekend meets The Mowgli’s sound proved to be the perfect bobbing music.

CWRU junior Victoria Robinson enjoyed this part of the show, even though she was there to primarily see Walk the Moon.

“I hadn’t heard their music before the show, and now I’ve been listening to it non-stop since,” said Robinson. “I also got to meet them after the show, and they were really cool.”

During The Griswolds, when it was announced that it was Lachlan West’s (The Griswold’s drummer) birthday, the crowd sang along for his celebration. And when singer Christopher Whitehall reached his hand across the pit to touch hands with the audience members, they surged forward, fingers stretching to brush his.

There is no doubt that The Griswolds are ready for a tour of their own, and in June of this year, they’ll have the chance to forge that path.

However, right now they’re supporting Walk the Moon. And there was no mistake when the headliner took the stage.

Opening with “Different Colors,” complete with an incredibly vibrant light show, Walk the Moon’s audience knew every word to the synth-heavy echoey song. But the ground floor became pretty wild. Despite initially starting off towards the back of the show, CWRU senior Erika Brentar eventually was sucked into the middle of the crowd.

“At one point, Walk the Moon’s lead singer, Nicholas, jumped into the crowd, and everyone swarmed towards him, so we got moved to the center,” she said. “It was great.”

Regardless of where one was in the House of Blues, everyone felt the steady thumping during “Shut Up and Dance,” when the crowd hopped up and down in unison. The entire balcony shuddered, bending under the weight of hundreds of dancers landing on their feet.

“You could feel the floor shaking,” said Brentar. “It was so fun; I wish they would have just continued singing that song on a never-ending loop.”

Other highlights included Walk the Moon’s cover of The Killer’s “All These Things That I’ve Done,” “Anna Sun” and “I Can Lift a Car.” Periodically guitarist Eli Maiman was featured on a small stand, milking athemy guitar solos. The crowd loved it. Then it was bassist Kevin Ray’s turn. The crowd loved it just as much.

However the real star of the show was Petricca. At one point, he stood on the pit ledge and touched hands with the audience. Also yes, even though the majority of them had their cell phones out and snapped selfies with the famous singer, the sincerity of the connection is not something you see at most shows.

Petricca hit the nail on the head after a group activity of expelling negative energies; he ended off the group shake-out and said, appropriately, “All you have left is this feeling of being alive right here, right now.”