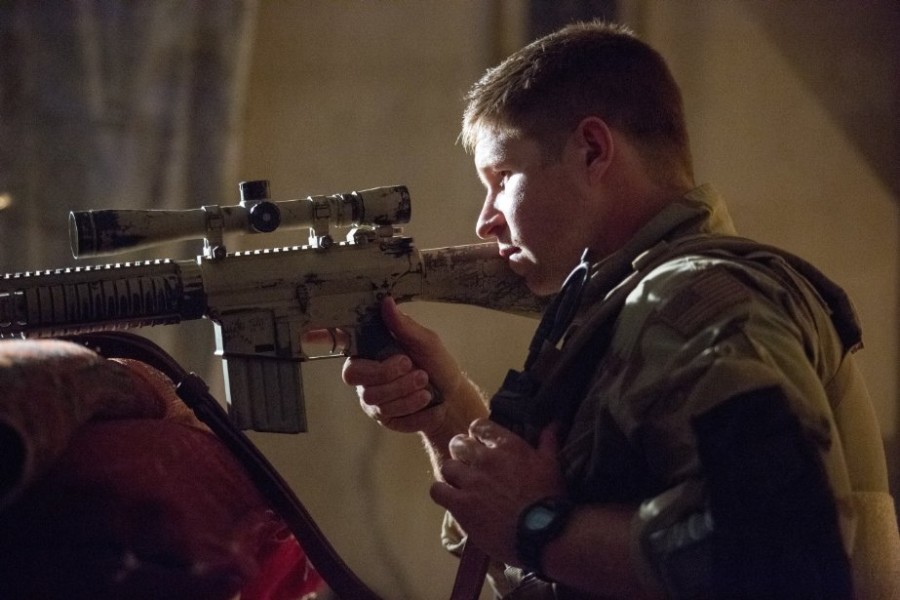 "American Sniper" has caused controversy since it came to theaters because of its takes on heroism and modern warfare.

It has been five weeks since the start of 2015, and “American Sniper” has already solidified itself as a practically indomitable contender for the most controversial film of the year.

From aggregating, derisive, social-media commentary (think Twitter/Facebook/Tumblr-spheres) to bifurcating audiences into two schools of thought, immaculate praise and critical condemnation, Clint Eastwood’s latest release has garnered a considerable amount of attention for its source material and visual interpretation. Such controversy regarding the accuracy of titular character Chris Kyle’s memoir, and subsequently its adaptation’s commercial success, has prompted comedian-actor Seth Rogen, director/political activist Michael Moore and even prominent linguist Noam Chomsky to weigh their perspectives in the face of intense public backlash.

Regardless of whether or not you fall within the category of any kind of fiscally/socially liberal/conservative combination, this film will test as well as seek to reaffirm your own personal beliefs related to the War on Terror and its aftereffects. As such, there should be no surprise that despite how hard “American Sniper” tries to focus solely on its stated American war hero, the subject of war and politics is completely unavoidable. Ultimately, this becomes the main reason for such controversy.

Eastwood’s “American Sniper” focuses on Chris Kyle (Bradley Cooper), a wannabe rodeo star who, after witnessing a television coverage of the 1998 U.S. embassy attacks in Kenya and Tanzania, decides to join the U.S. Navy. While experiencing intense training, he meets his future wife, Taya (Sienna Miller), at a bar one night; they are quickly married and settle into their new home. After 9/11, Kyle is deployed to his first tour in Iraq; his training as a SEAL sniper earns him a status among his allies as well as his enemies as the “Legend,” a title Kyle unwillingly accepts.

There is no doubt that Kyle believes completely in what he is doing and what he seeks to accomplish out on the battlefield. Despite numerous honorable discharges and a growing family at home, his sense of purpose and unrelenting intensity gushes into his relationships in a way that cannot help but be interpreted as unnerving. Time and time again, he finds himself struggling with hiding his sporadically-emerging posttraumatic stress disorder (PTSD) only to draw himself back to the battlefield where, if anything, he seems to act the most human.

Through these violent situations, Eastwood consistently weaves themes depicting undying loyalty and the psychological aftereffects of war with expected character decisions and sustained dialog that is quite simplistic in nature. There never appears to be a moment of brilliant change or even a gradual epiphany regarding a change in perception; things just simply are the way they are.

Overall, Kyle does not demonstrate a change in his beliefs from the start of the film to the end. To say he doesn’t experience life-altering events, however, would be incorrect.

There are a handful of instances which are further enhanced by the existence of his PTSD symptoms; however, the notion that he continues to hold fast to the image of himself as a necessary and unconquerable protector of others, a belief that is shown to be dangerously instilled in him since childhood, ultimately makes him appear single-minded and slightly psychopathic.

“American Sniper” also showcases a career-defining moment for Cooper. Flashes of menace, severe grittiness and skillfully controlled suppression of expression produce an absolutely gut-wrenching and impactful demonstration of character. It’s a spellbinding performance that unexpectedly fails to pair well with Miller, who portrays his troubled and tortured wife, who is often left to the wayside to either relieve some sexual tension or voice her ignored concerns.

Failing to flesh out the majority of the supporting characters appeared to be the trend in Eastwood’s latest release, and ultimately, this stifled opportunity left me continually yearning for deeper expansion to make up for what felt like a one-dimensional character.

You cannot expect, however, for this to be the only flaw within the film. From the use of an obviously fake infant to the cheesy and cliché slow motion, complete with excessive blood-splattering CGI, Eastwood’s mishaps often distracted me from the scene at hand. Having moments of intense emotional buildup be trumped by what felt like cheap and unprofessional tactics felt somewhat insulting and definitely not worthy of the realistic atmosphere “American Sniper” was aiming to create. I expected a lot more from a director with titles such as “Mystic River” and “Letters from Iwo Jima” and a budget nearing $60 million under his belt.

It is difficult to admit that the hardest part to swallow from “American Sniper” is the lack of sympathy for the population against which the war is being waged. Consistently, the term “savages” instills a survivalist mentality that portrays the foreign civilians as animalistic and dehumanized. However, as pointed out by Kyle quite early on in the film, there is only one outcome in the battlefield: either you or your enemy survives the other.

It’s a reality, a red pill if you will, that produces a sense of ambiguity and uneasiness at this film’s conclusion and essentially portrays a brutally humbling perspective too impactful to ignore. “American Sniper” should, by no surprise, be a must-watch.