An inside look at President Obama’s visit to Cleveland 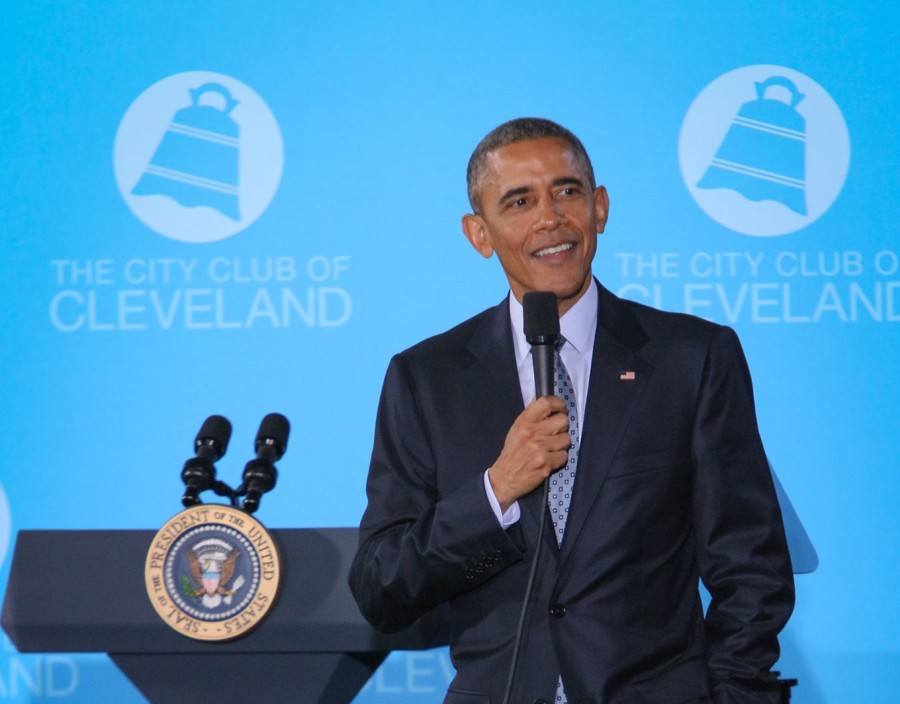 President Obama spoke at the City Club on March 18. He talked about his new policies regarding middle-class economics, as well as the importance of manufacturing.

“To the City Club of Cleveland: It was an honor to join the long list of leaders who have come before you. You embody the best traditions of our democracy.”

It is a century-old tradition for speakers that address The City Club of Cleveland (City Club) to sign our guest book. Founded in 1912, the City Club is the nation’s longest continually operating free speech forum. We provide a place for the community to come together and engage in civil and civic dialogue about issues of regional, national and international importance. Over the 102 years we have existed, we have had tens of thousands of speakers sign their names, but few have spoken so eloquently to the purpose of our forums as President Barack Obama.

President Obama’s March 18 sold-out address to the City Club honored another City Club tradition too: a decades-old tradition of presidential visits dating back to Ronald Reagan.

I was a member of the City Club team that helped bring President Obama to Cleveland. All told the White House gave us five days to put together a successful forum for the Leader of the Free World, and they were some of the zaniest of my life.

The phones started ringing at 9:30 a.m. on Monday, March 16. Nothing could prepare us for the deluge of callers. The forum of 440 people sold out in 45 minutes, but calls were answered for hours afterward, as the waiting list amassed nearly twice as many people as the event in the Junior Ballroom of the Global Center for Health Innovation could hold.

Then came the organizing. A short deadline is a mixed bag of blessings and curses: You don’t have time to think too hard or panic, but you also don’t have much time to plan. The days that led up to the address were a blur of White House communications, text messages, alphabetizing, ticket distribution and a level of focus I had thought previously unattainable. The pressure associated with working for the president, as it turns out, can be a pretty powerful motivator.

On March 18, all the hard work instantly became worth it. We have had many suave presidents throughout our nation’s history, but, regardless of politics, it is difficult to imagine many of them being as smooth as President Obama. His handshake conveys a level of confidence and mastery that can only be associated with being the commander in chief of the strongest military in the world. It is firm, dry, solid and lasts for two seconds.

The content of Obama’s address concerned middle-class economics, a term he has coined in recent months to tout his administration’s approach to the economy during his six years in office.

“This progress is no accident,” the president said. “First and foremost, it’s the direct result of the drive and determination of the American people. But I’m going to take a little credit. It’s also the result of decisions made by my administration in partnership with members of Congress to prevent a second depression and lay a new foundation for growth and prosperity.”

Obama’s talk was followed by the City Club’s most important post-forum tradition: a live, unscripted Q&A with the audience. For me this is where the true significance of what we do at the City Club emanates from. The ability for a citizen of any country to engage directly in dialogue with their elected officials about issues that are important to them embodies our nation’s best hopes and deepest democratic aspirations.

Audience questions for the president ranged from topics involving community college and campaign funding to advice he would now give himself on the first day of his first term in office. Here Obama shined, giving the City Club audience some of the most human moments of his presidency thus far.

All things considered, myself and the rest of the staff at the City Club are immensely grateful to have had this opportunity and could not be more pleased with how the event turned out. And in two years with a new sitting president, we may just get the chance to do it all again.