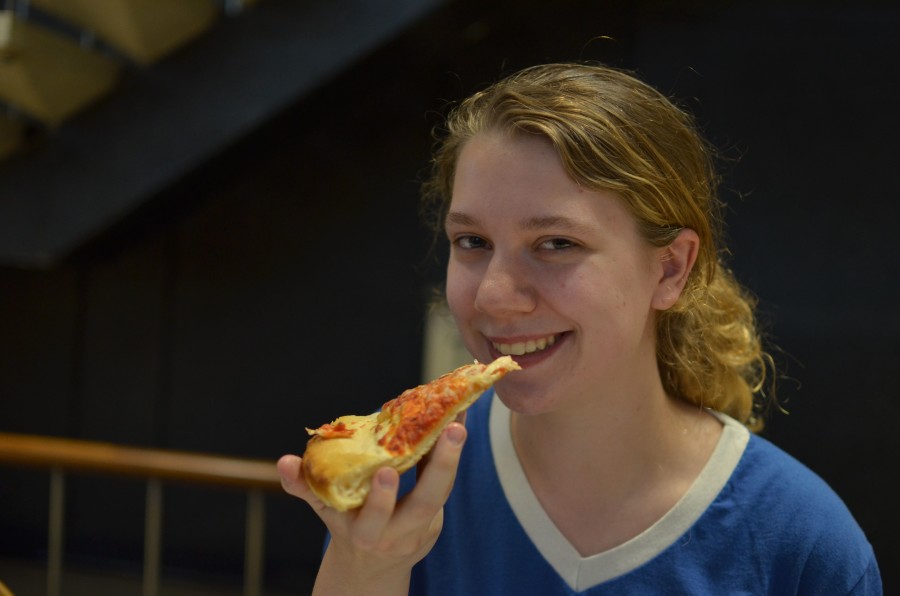 I am the new director of print for The Observer, after working for a year as the arts and entertainment editor. I’ve written about food in the past for The Observer and a little bit for Cleveland Scene Magazine during an internship there.

The dining halls were a new experience after living off campus for almost a solid year. Returning to Leutner and Fribley was glorious. Eating was faster and was once again a social activity. The food tasted better than I remembered, too.

It’s worth remembering that any food isn’t going to taste as great after eating it every day. The regular items get old, right? I remember getting sick of Fribley’s pizza and Leutner’s chili, but returning to them with a fresh palate allowed me to enjoy the foods I’ve been missing.

Fribley Food Item: Cheese pizza
Notes: I like my pizza saucy, and this pizza was saucy. There wasn’t much cheese, which for me was great, but it was pretty scant. The balance was off. But for college pizza? Better than Rascal House.
Rating: 4/5

Fribley Food Item: Burger
Notes: I added onions to the burger, which was a nice touch. However, the meat was thin; of course, this is understandable when you’re making burgers in bulk. I also wandered around Fribley for a solid eight minutes searching for ketchup, to no avail.
Rating: 3/5

Fribley Food Item: Pasta salad
Notes: The pasta was undercooked. I mean, it was crunchy. The sauce was sweet and interesting, and carrot relishes added a pop of color and flavor. But crunchy pasta? Couldn’t do it.
Rating: 1/5

Fribley Food Item: Balsamic bowtie salad
Notes: A little flavorless. This wasn’t bad, and it served well as a nice side dish. But the vegetables (not the sauce) were the most flavorful part. Maybe this could have been better with a little bit more sauce, but it fell into blandness without it.
Rating: 3/5

Leutner Food Item: Cole slaw
This cole slaw was warm, and too oily. The cabbage was kind of limp because it had been sitting out for a while. If it had been fresh, I would have enjoyed it a lot more.
Rating: 2/5

Leutner Food Item: Quesadilla
I topped my vegetarian quesadilla with salsa verde. The salsa was nice and tangy, and the cheese was melty. This was my favorite food out of Leutner or Fribley.
Rating: 5/5

Leutner Food Item: Bread
Nothing beats Leutner bread. Even when I ate at Leutner every day as a first-year student, the bread never got old. It’s fresh, soft and delicious when covered in butter. Not a health-conscious option, but they don’t call it the freshman 15 for nothing.
Rating: 5/5

Leutner Food Item: French fries
With large flakes of salt, the fries at Leutner are always good. Greasy and perfectly cooked, the fries are good as a side or on their own. I did eat one slightly-green, undercooked fry, but the rest were pretty universally delicious.
Rating: 4/5

Final verdict: Leutner
Leutner scored a 4/5 average, which swept the competition. (Fribley scored an average of 2.75/5.)

I remember as a freshman, I thought Fribley was better than Leutner. As a sophomore, I thought Leutner was better than Fribley. However, returning with less bias, I realized that Leutner’s much larger selection, and better selection of regular food items, makes it the better place. And that doesn’t even touch on atmosphere; Leutner’s newer design, variety of seating and modern decor makes it a more up-to-date and fun place to eat, on top of its superior food.