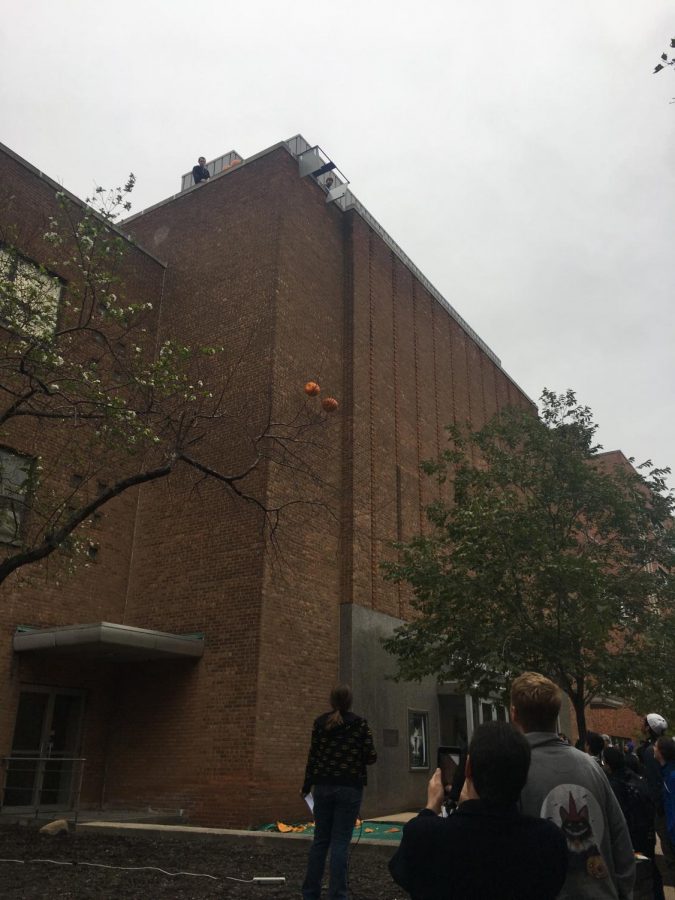 The annual pumpkin drop was held outside Strosacker Auditorium.

“The purpose of the drop is to get into the fall spirit, test to make sure that gravity still works and [to] eat pie,” said Allen Foster, the president of PGSA, when discussing the purpose for holding the annual pumpkin drop.

They dropped six pumpkins in total this year, two at a time.

According to Allen, they tried to drop two pumpkins of very different mass, one large and one small, to show that earth’s acceleration is constant, regardless of mass. They also dropped two large pumpkins together to create more fun, because the large pumpkin appeared to explode when it hit the ground.

Allen explained the choice to use Strosacker Auditorium.

“We use Strosacker simply because it is tall, and attached to the physics building,” said Allen. “Also, Physics 121, which is the introductory physics lecture, ends by 12:30 p.m. every Monday, so it is a good time and good location to catch students’ attention and give them a little treat of apple cider and pie and before Halloween.”

According to Allen, this year’s pumpkin drop was still a big hit and the crowd becomes larger and larger each year.

“I think it’s just a fun quick thing that students like, and who doesn’t like smashing pumpkins and eating pie?” questioned Allen.

“The pumpkin drop is a fun CWRU tradition. I always enjoy the pie and cider,” said Neha Reddy, a fourth-year  biomedical engineering and music major. “We put out almost 500 plates of pie and cider, all of which were gone less than five minutes after the drop.”