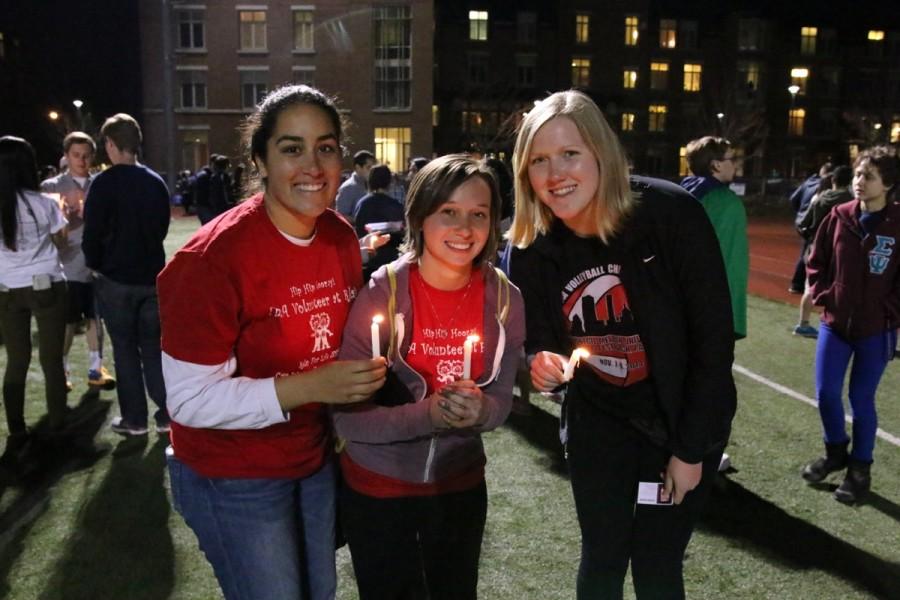 This year’s Relay for Life raised $66,140 and included events such as cart rides, performances, and a luminaria ceremony.

This year’s Relay for Life was illuminated first by a bright sun and cloudless sky, and later by a solemn Luminaria Ceremony. As the day grew warmer, people converged on the DiSanto Field in the North Residential Village, ready for a day of celebration, fundraising and awareness.

In support of cancer survivors and cancer research, Case Western Reserve University held its annual Relay for Life, starting at 11:30 a.m. on April 18 and continuing on throughout the day and night with food, entertainment and service.

Hosted by Colleges Against Cancer (CAC), Relay for Life is an annual 18-hour event that has been a CWRU tradition for eight years. It is a flagship event of the American Cancer Society with three main purposes. These are to celebrate the lives of survivors who have won the battle against cancer, to remember those who lost their lives to cancer and to fight back in the hope that one day a cure will be found.

Cancer is a disease that affects millions of people worldwide. It is estimated that there will be 1,658,370 cases diagnosed and 589,430 deaths due to cancer in the United States in 2015. The cost of research, treatment, coping and awareness is very high, making it imperative to raise money.

“Our goal is to celebrate the survivors,” said senior Shruthi Srinivas, executive director of external affairs for CAC. “We stay up all night as a symbolism for the fact that cancer doesn’t sleep and we are not going to stop until we cure.”

Over 700 individuals attended and participated in the fundraiser, 620 of them having pre-registered. Various booths from different Cleveland and CWRU organizations surrounded the field while people walked on the Coach Bill Sudeck Track, buying things and participating in activities.

“There were some pretty amazing booths,” said senior and Sigma Nu member Anton Spencer. “There were a lot of really fun activities, such as a volleyball tournament and wagon rides around the track. Overall, it was a really fun event.”

While the football field location was a good fit for the sporty walking aspect of the event, it was also the only location that would have fit the huge number of people attending.

“We considered having it at the Veale Center, but it was way too small to fit everyone and we love having it outside,” said Srinivas. “People love coming to an outdoor event and challenge each other to celebrate their families and support their loved ones who have to live with their disease.”

In order to raise even more money than last year, the committee changed a few things to provide more incentive for people to donate. “One of my favorite things that we’ve never done before was putting some of the fundraisers on the track,” said Srinivas. “It made walking a priority and gave the whole event a more community-like feel. “We also made it so that people got wristbands to get food if they pre-registered and donated $10 to the event.”

People from all over Cleveland attended. They included CWRU members, students from John Hay High School and other members of the community.

“Even family members of students came to show their support and have some fun. It was definitely a family event,” said Srinivas. “It was amazing. We had great weather, great participants; people were really excited to be there.”

For CAC, planning for the event began July 2014. There are 25 members on the committee and seven executive members. For nine months, they worked to plan the events to make it a fun family-friendly time for everyone. Events included theme laps to honor people affected by cancer, concerts and entertainment performed by various CWRU. There was also a luminaria ceremony in which people decorated luminaria in honor and remembrance of those who lost their lives to cancer.

For Srinivas, helping to organize and participating in this event meant honoring her grandmother’s memory. “I started Relaying eight years ago when my grandmother died of chronic lymphatic leukemia,” she said. “She’s my inspiration to remember.”

The event provided a way for people to come together and motivate each other to fight the disease. “All of the people I’ve met through working with the American Cancer Society and Hope Lodge give me the motivation to keep fighting back,” said Srinivas.

Even those who performed had stories of their own to share about their experiences with cancer. “The fight against cancer is a very personal one for me,” said Sasha Vladimirovna Belotserkovskaya, aka Sasha B. “My dad passed away of brain cancer when I was nine years old, and life’s never been the same since. Everything I do has become a question of whether or not it will make my dad proud, and he inspired me to study engineering, because he was an electrical engineer.”

Sasha B. wrote and performed an original song, titled “I hope you know…” dedicated to her father. “It would give me the chance to share my dad’s story and to maybe touch some other people who have gone through similar things.”

“I wasn’t sure at first if I should do it, because it is very personal and sad, but it needed to be heard,” she said. “So thank you to everyone who came out to Relay for letting me share that.”

“I have done this all four years here at CWRU, and I encourage everyone to participate,” said Srinivas.