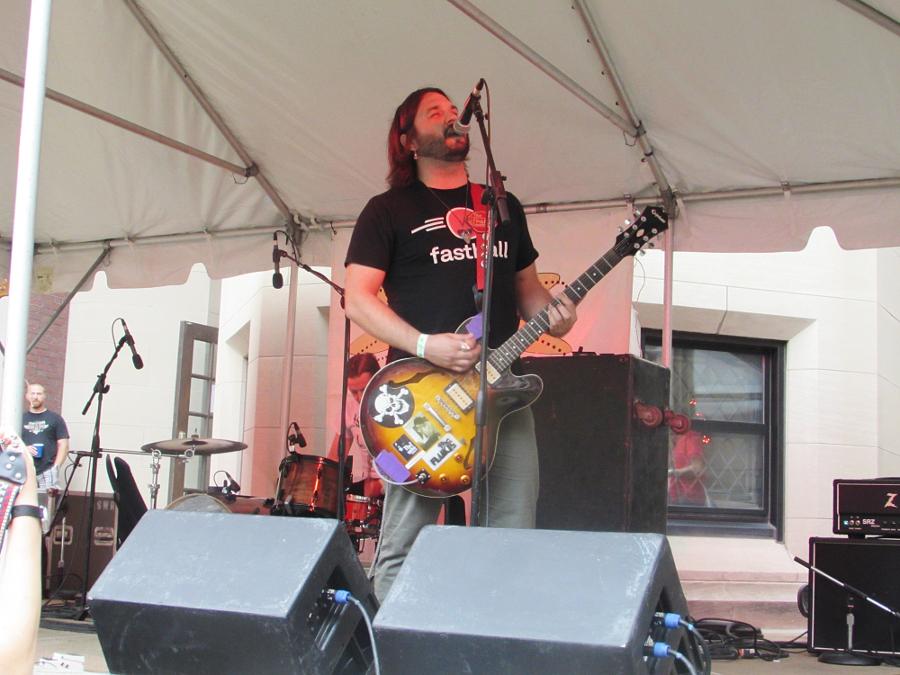 Were you terrified by the loud screaming coming from Mather Quad on Saturday, Sept. 6?

If you said yes, chances are you’re probably not alone. No, it wasn’t a bizarre ritual, and no, it was not some weird initiation event. It was WRUW’s semi-annual music festival, Studio-A-Rama.

This year’s co-headliners were punk rock band Bleached and the eclectic pop-punk, palindromic group, Tacocat. Although the headliners are national acts, the rest of the bands were from the Cleveland area, giving the festival a unique and local feel.

One such act brought a whole new meaning to the “you scream, I scream, we all scream for ice cream” phrase. Punk band Cruelster delighted and confused the crowd with a spirited performance that involved the lead singer screaming into the microphone while rubbing ice cream all over himself. Case Western Reserve University alum Ben Witoff thought the stunt was in the same vein as what he expected from the festival and enthused that “it was great!”

Before Cruelster’s ice cream extravaganza, fresh-faced brothers Emmett and Cullen O’Connor (13 and 16 years old respectively) took the stage as Archie and the Bunkers. The band was influenced by the group The Screamers which shows in their punk rock sound but also maintained a jazz feel with their inclusion of organ music. They were excited to perform at Studio-A-Rama after going to the festival last year and hope to come again.

For first timers on the other side of the stage, it was also a night to remember. Freshman Paige Yepko noted, “It seems like a great eclectic group and it’s something that you don’t normally see on CWRU’s campus.”

Fellow CWRU student Sonya Mehta agreed and added that although they had not come to see a particular band, they were excited to see what the festival had to offer. The uniqueness of the concert was also the reason that Witoff keeps coming back. He summed it up perfectly by saying, “It’s a musical experience that you can’t find anywhere else.”

For WRUW members, it was finally a chance to see their hard work pay off. For Connor Swingle, co-host of “Video Kills,” it was all about the local bands. “It’s great to some Cleveland bands with the headliners,” he said. In contrast, Tessa Greene, who co-hosts “Girls Club,” was looking forward to catching the headliners. “My radio show is all female led bands or bands with a focus on women. So the fact that we have two headliners that are mostly comprised of women is really exciting.”

The headliners, in turn, did not disappoint. With a thick group of students, kids, adults and some dogs, Tacocat and Bleached took the stage and rocked the crowd. Tacocat won crowd favor with quirky character, catchy songs and fun dancing.

Keeping with the anything-goes theme of the concert, the band performed songs of various topics including urinary tract infections and contraception. In fact, lead singer Emily Nokes, introduced one song by saying, “This song is about periods. So if you’re on your period or know someone who’s on their period, this song is for you.”

Bleached, however, was a little less eccentric, and had a nostalgic vibe to their music. Their song, “Love Spells” stood out for its throwback punk sound.

This meeting point of different yet similar bands showcased the strength of Studio-A-Rama. It has a rare ability to bring together different people together for one cause: music.