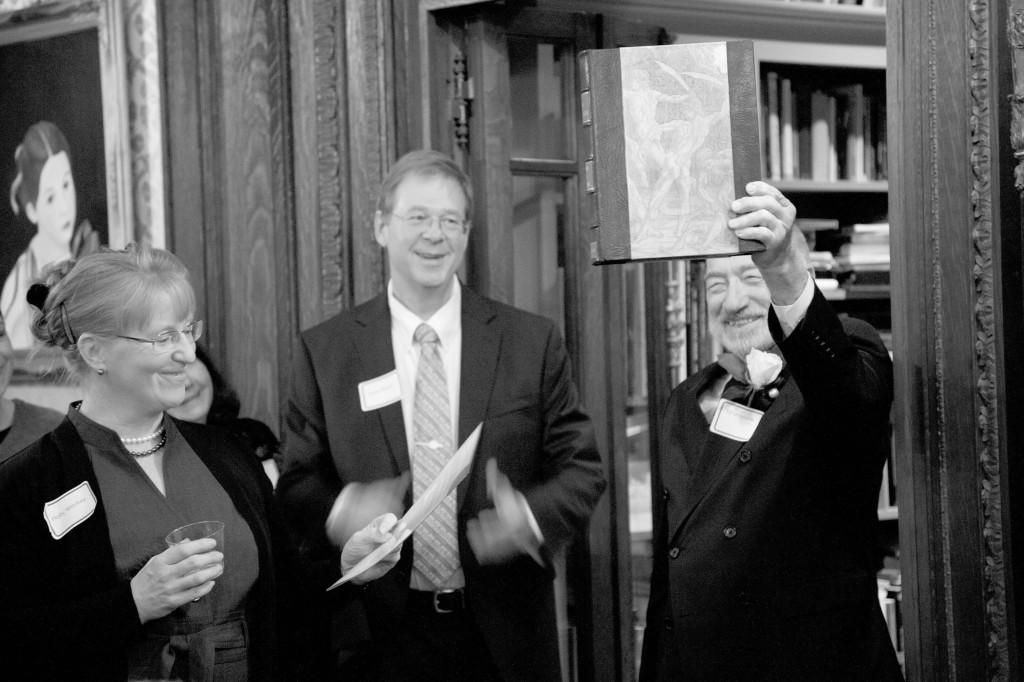 This semester, Case Western Reserve University bid farewell to a true Renaissance man. After almost forty years as a part of the university, Dr. Edward J. Olszewski of the Art History Department retired from his position as Chair of the Department and as a professor. But he did not go without leaving a mark on his many students and colleagues, and so the department held a celebration in his honor on Sunday, Nov. 21. It not only brought together his many colleagues and former students, but it also became the site of the official announcement for the Edward J. Olszewski Graduate Student Travel Fund, established by Friends of Art and over 130 donors.

Olszewski came to CWRU in 1971 as an associate professor of art history. His passion and love of Italian Renaissance art was only topped by his dedication to the research and teaching of the topic, and over the last four decades he has written eight books and had many articles published in scholarly magazines. He mentored many PhD students, including former student Dena Woodall, who now works at the Museum of Fine Arts – Houston as an assistant curator. Woodall said of Olszewski, “He has been a great influence on my life, and I’m so glad that I was able to make it out here for this event.”

The event, hosted by Mr. and Mrs. Ted Smith, did not just celebrate the successful retirement of one of CWRU’s finest professors, but also the start of a new scholarship for graduate students and a major project in the form of a Symposium dedicated to Olszewski. The president of Friends of Art, Lee Warshawsky, said of it, “To honor these accomplishments, Friends of Art, the support group for the Department of Art History and Art, is undertaking several projects: the creation of the Edward J. Olszewski Graduate Student Travel Fund; the publication of a Festschrift and accompanying tabula gratulatoria (a congratulatory book of letters from colleagues, students and friends); and the sponsorship of a Symposium to be held in October 2011 at the Cleveland Museum of Art with a featured keynote speaker on Italian Renaissance and Baroque issues. Leadership of this event and Festschrift is being assumed by Dr. Olszewski’s former graduate students.” The Festschrift is co-edited by Jennifer Finkel, Dena Woodall and Michael Morford.

Friends of Art raised $31,100 for the Travel Fund, well above the amount expected. There were over 130 donors to the fund, among them Holly Witchey, who said, “It’s hard to be a successful art historian when your travel is limited to the Midwest. I hope these dollars send graduate students in art history to the places they need to go and give them the time and resources to do the necessary research to make them a success in art history.”

Another contributor to the Fund was Dr. Lloyd Ellis, who was also an early supporter of the project. “Edward Olszewski was probably the most important presence in the Department of Art and Art History during the period he taught there,” he said. “Art Historians tend to be a rather unusual bunch. Ed was a consistent center of stability, normality, and civility in a department not uniformly noted for these characteristics.” Other key participants included Harriet Wadsworth, Faye D’Amore and Patricia Ashton

Toward the end of the evening, several of the organizers and attendees spoke on the subject of Dr. Edward Olszewski. Dean Cyrus Taylor began the speeches and said, “Ed has been a superb teacher, a mentor to his students, an able administrator, and chair of the department of Art History. He is a true Renaissance man.” Other speakers that evening included Witchey, Warshawsky, Jennifer Finkel, Department Chair Elect Dr. Catherine Scallen and of course, Dr. Olszewski himself.

He was presented with a Tabula Gratulatoria, created and bound by Karen Esper, which, as said by Witchey, was, “Chocolate goatskin and calf vellum with archival chamshell. The box is decorated on the front and back with a copy print of Pollaiuolo’s Battle of the Nudes mounted beneath the panels of transparent vellum. It is titled in crimson leather tilting labels in gold, inserted on the spine between raised bands, and the inside is lined with crimson ultra suede.” It was a stunning present to a man who has spent many years focusing on the most minute details in Italian painting and sculpture, and he accepted it with a smile.

Dr. Olszewski ended the night on a high note, saying, “Thank you all so much for coming out tonight. Thank you all for supporting me for all of these years, for your friendship and your help. I couldn’t have come this far without all of you.”